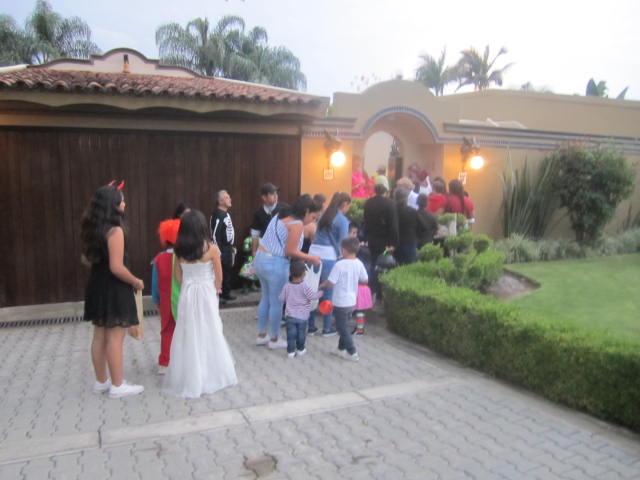 The Dia de Muertos, Day of the Dead, celebrations started a week earlier in Ajijic with the Thriller Dance.  These events are not just one day but many days. Each town has it’s own celebrations. Besides the Thriller Dance, Ajijic has an outdoor movie showing on the malecon, cemetery tours, parades, memorial altars, life size catrinas, town dance, lighting of skulls near the plaza, live entertainment and much more.

But back to Halloween night and these photos. This is probably the most exciting night of the year for Mexican children. (Maybe second to Christmas). They descend on the expensive neighborhoods in cars, vans and trucks.

The most active neighborhoods in the Ajijic area are Chula Vista, upper and lower La Floresta, and the gated community of El Parque.

Large groups of parents, grandparents and children roam the streets in these areas, with the children chanting “Queremos Halloween” and looking for friendly participants giving out candy. When they find one, they chant that phrase to the homewner. The man in the above photo was reaching deep into his bucket for his last piece of candy.

The girl in the above photo looks bewildered at it all. There is a lot of noise and excitement.

Children run in the streets, crossing over in front of cars. They are so excited about getting candy that they lose all interest in staying safe. Not the little girl in the photo above. Her mother had a tight hold on her hand, keeping her safe.

The gated community of El Parque had a special area set up right outside their gate for giving out candy. The line was about a block long. Worth the wait for them because instead of getting one piece of candy, they each got a bag of candy.

Several people had included their dogs in the festivities. This Mexican Hairless wanted nothing to do with all the noise and smoke.

Many parents were also in costume. Dracula in the above photo was proud of his beautiful cape. But he was too handsome to convince me.

Some of the residents on El Parque came out for the event. They were having as much fun as the children.

At the entrance to El Parque, the end of the long line, was artificial smoke and the table with expats giving out bags of candy.

I liked the happy/sad clown in the above photo.

It is hard to tell much about the costume the bulldog is wearing. It is a bee costume with yellow wings. The owner is dressed like a beekeeper. Very creative. There were many creative costumes.

Children were running to the next house in the above photo. About two houses on every street were participating by passing out candy. Almost all were expat homes with expats passing out the candy. Mostly elderly men. They seemed to be enjoying it as much as the children. Maybe they were thinking about their own grandchildren or their childhood trick to treating days.

The girl in the above photo was just leaving a house with candy. She couldn’t stop smiling.

The owners in the house in the above house must have run out of candy. The children were not happy with them.

Did Access Lake Chapala hire a new agent? Maybe he sells the abandoned and haunted homes.

The clown in the photo above was so tired that just waving was an effort. But no matter how tired, he wasn’t quitting yet. There is never enough free candy.

This last photo is of another clown who was too tired to walk. But still not giving up. Halloween comes but once a year and the children go as long as they can before exhaustion.

I gave up an hour earlier and was just riding around in the car. By next year I should be rested enough to go out again and run with the children. Maybe not run but walk with them. What a fun evening!