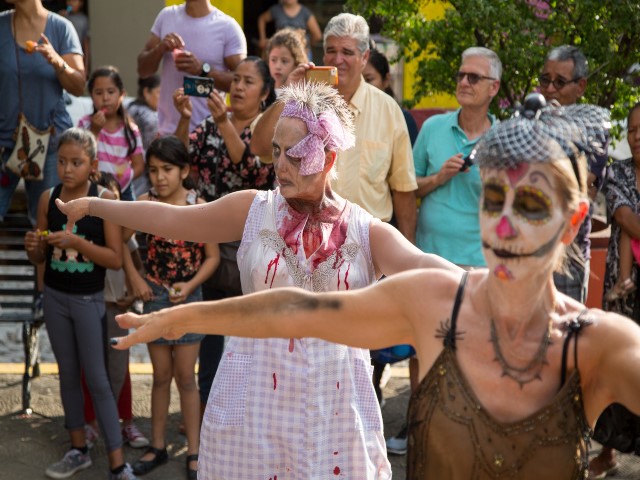 Another Thrill the World Dance took place last weekend. On October 26th, 2019. This year, like last year, it was held on the Ajijic malecon. In the beginning, it was held on the Ajijic plaza but there wasn’t enough space. Now, the performers first go to the cultural center on the plaza for makeup. This takes an entire afternoon. After everyone has been transformed into zombies, they walk to the basketball courts on the malecon. 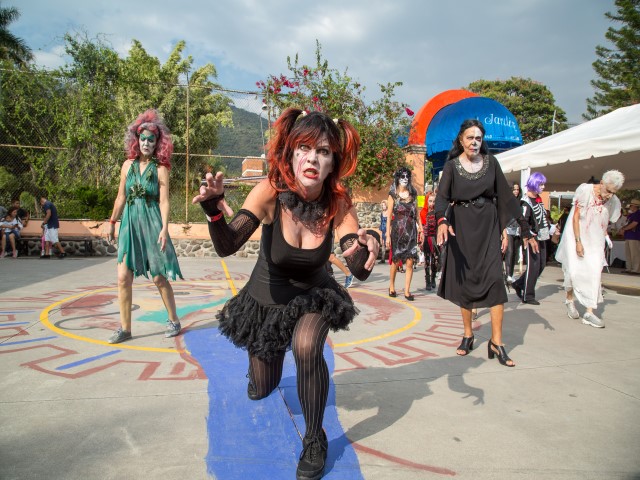 This event always takes place the Saturday before Halloween. And always at the same time worldwide. It began as a tribute to the genius of Michael Jackson and a fundraiser for local charities. 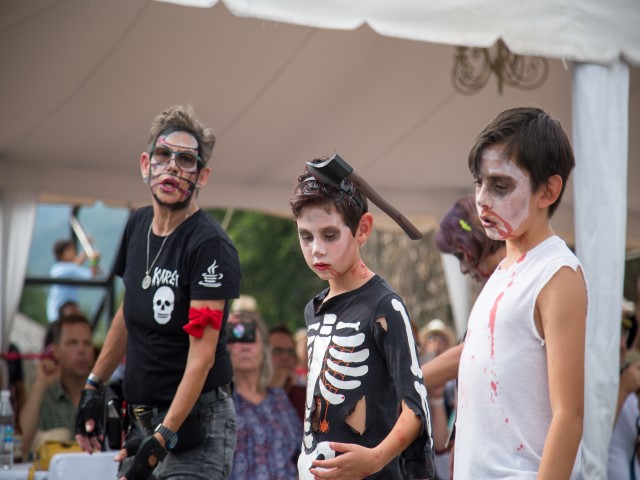 It also was created to try to break world records for the most people dancing at the same time. That is why it starts at five o’clock sharp. 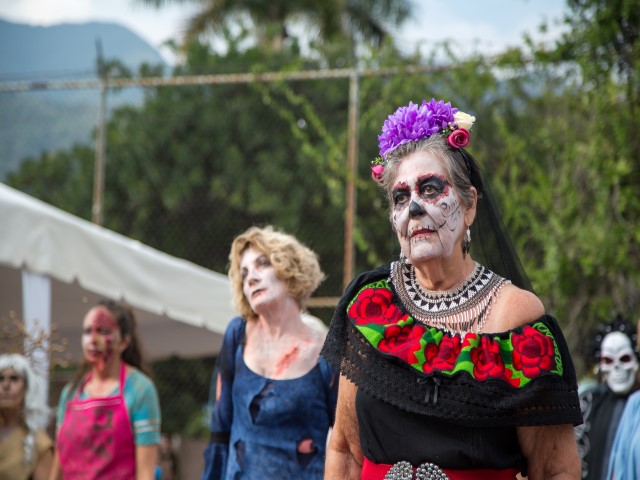 Ines Markeljevic started this movement in 2006 in Toronto, Canada. She has been the director every since that time. Anyone can join in the fun. Just register and pay a small fee to help with their expenses and have it on the same day and time as everyone else in the world. 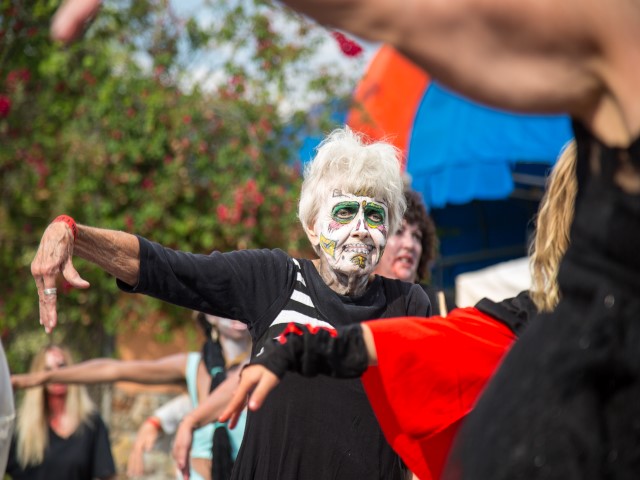 Another rule is that no one is rejected from becoming a dancer, unless someone is a bully and makes life hard on the other dancers. So all ages are accepted. 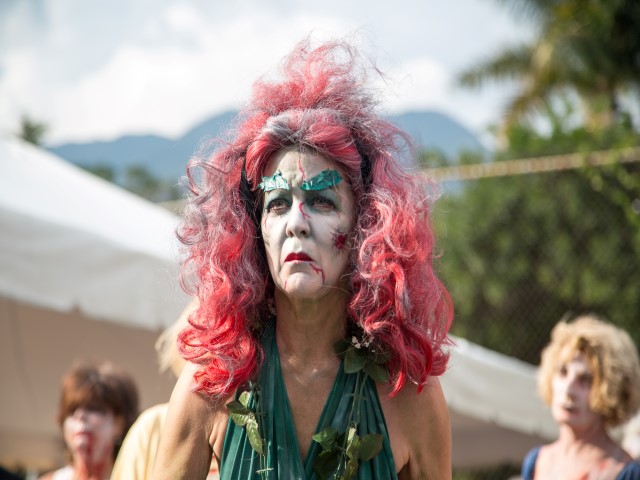 Even if  a person has never danced before, that doesn’t matter. The steps are easy to learn. They are taught a few weeks before the event. They are also shown on the thriller website. www.thrilltheworld.com 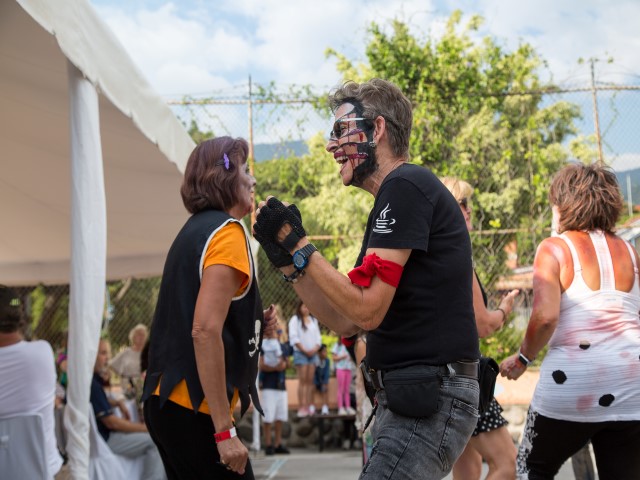 In Ajijic, the charity that benefits is the Red Cross. One way they raise money is to have chairs set up at the front of the dance area, shaded chairs, and people pay for a seat in advance. Everyone else stands behind these chairs to watch the performance. 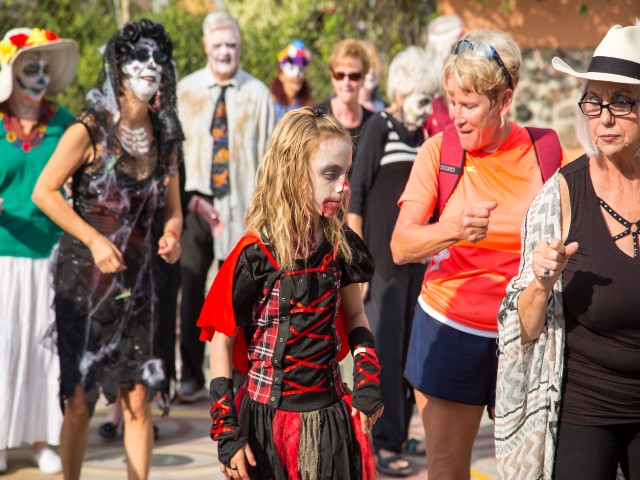 What a great costume on the young girl in the above photo. 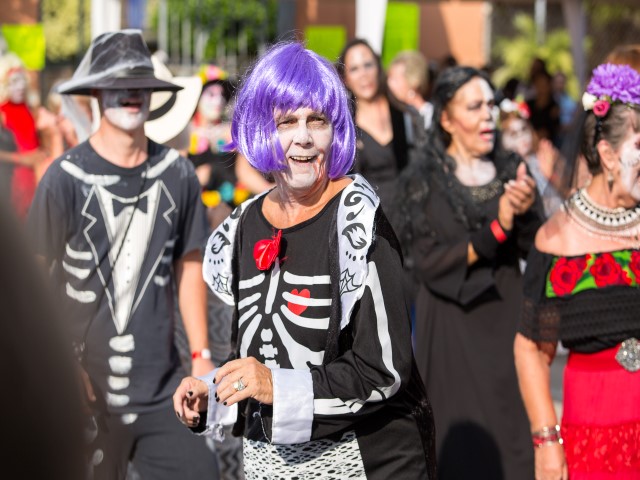 Purple hair is nice. She even has purple fingernail polish. Every detail counts in creating a zombie that is believable. 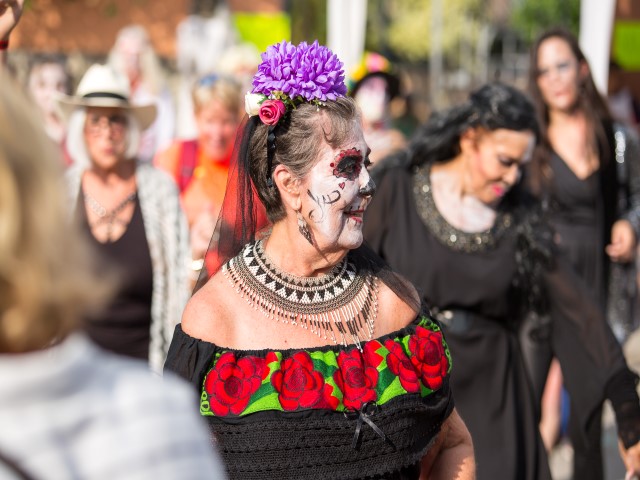 The zombie woman in the above photo is wearing one of the beautiful beaded necklaces made by a Huichol Indian. Her dress is also a Huichol craft. So much beauty for a zombie. I bet the creators of the dress and necklace never thought of them becoming a zombie costume. 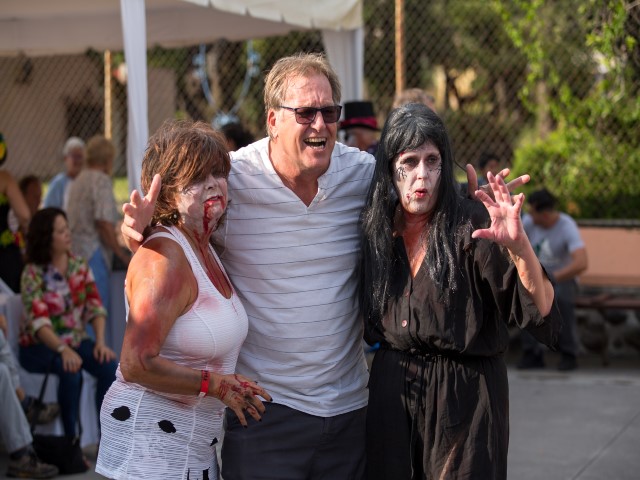 Lucky man with not one but TWO zombie women in his arms. 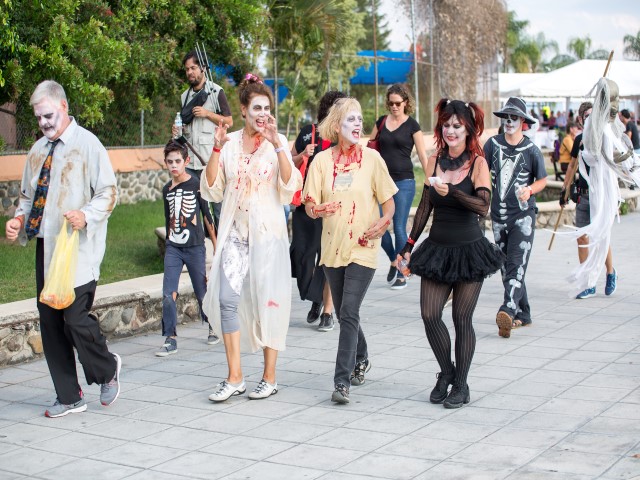 Above is a photo of the zombies walking on the malecon towards the basketball courts. After that performance, they walk to six corners and do another one. Lots of walking involved besides the dancing. 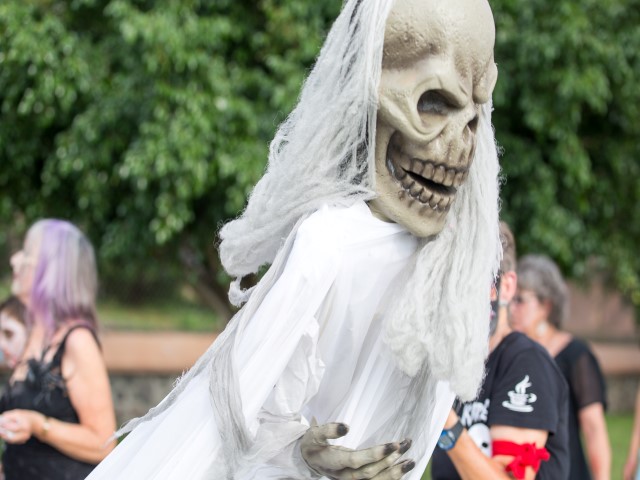 This ghost on a stick was carried in the front of the procession, like a flag declaring the coming of the zombies. Scary! 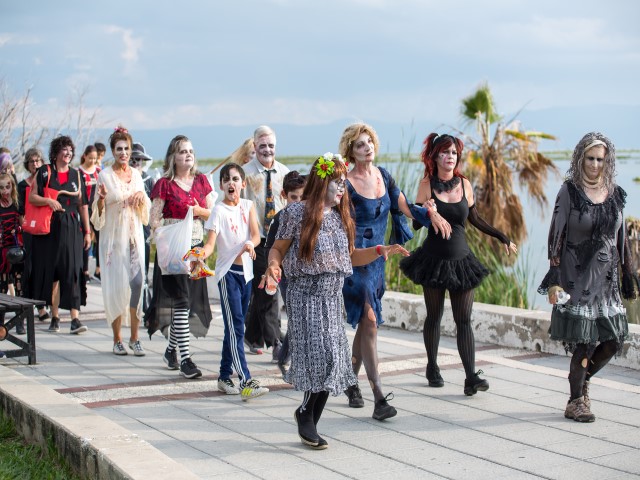 In the photo above, the zombies are on their way to six corners. Besides the dancing, there is a lot of walking involved. This event is not for the weak or the lazy. 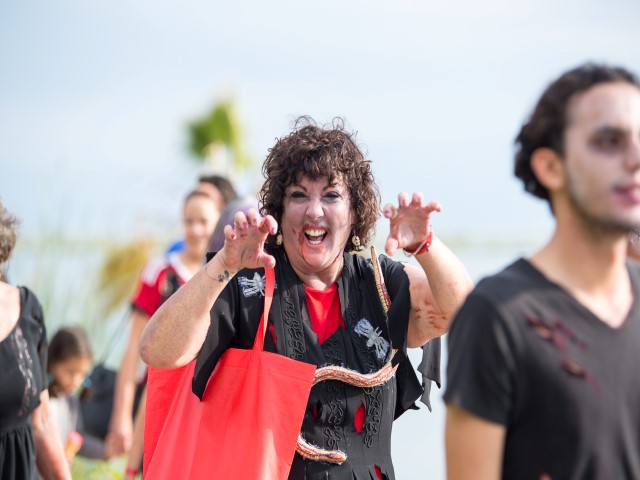 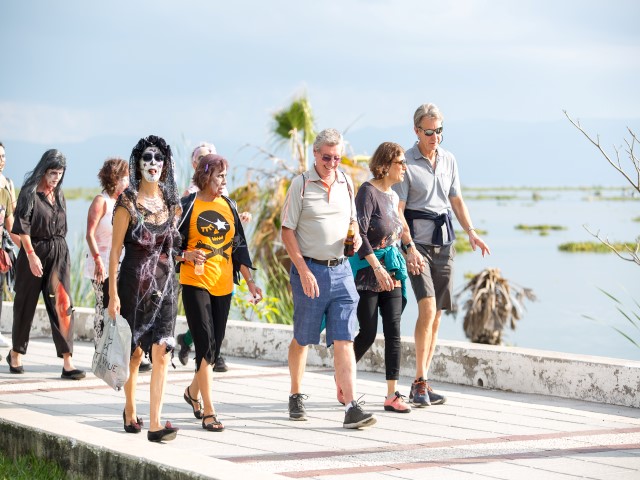 Besides raising money for charity, it is also to honor Michael Jackson. No matter what you may think about him, he created songs that are still played around the world and the Thrill the World album is the inspiration for this worldwide event. 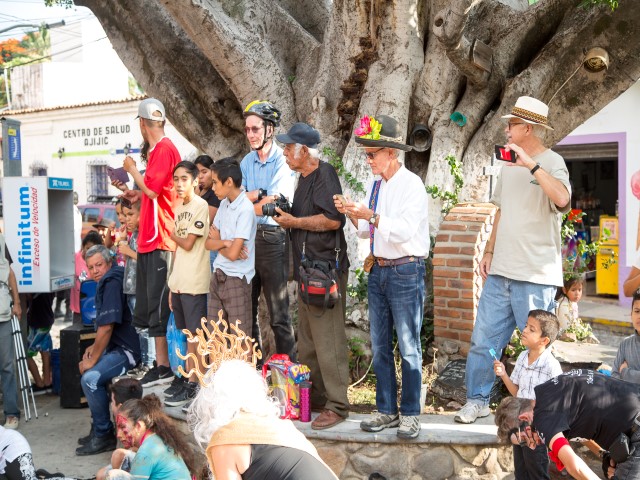 The above photo and the last three photos were taken at six corners. You can see that it is a small space for so many zombies and zombie watchers but everyone is in good humor.  Crowding was part of the fun.

The two zombies in the above photo were getting lots of exercise for their arms. An added bonus to participating in the dance. 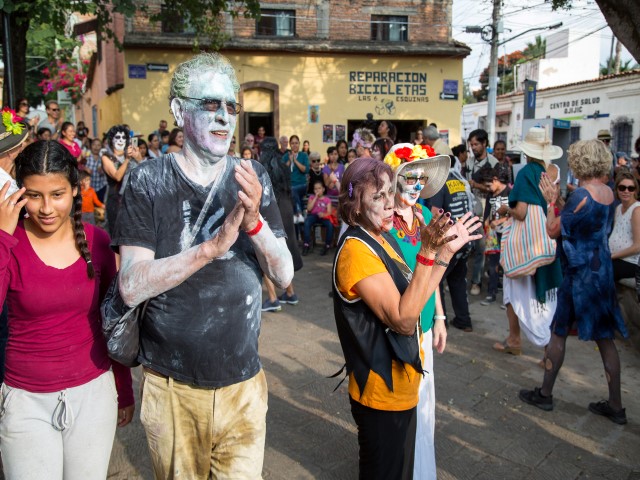 Finally, the dance was over. Zombies were clapping and the young woman in the left of the above photo looked relieved that it was finished. 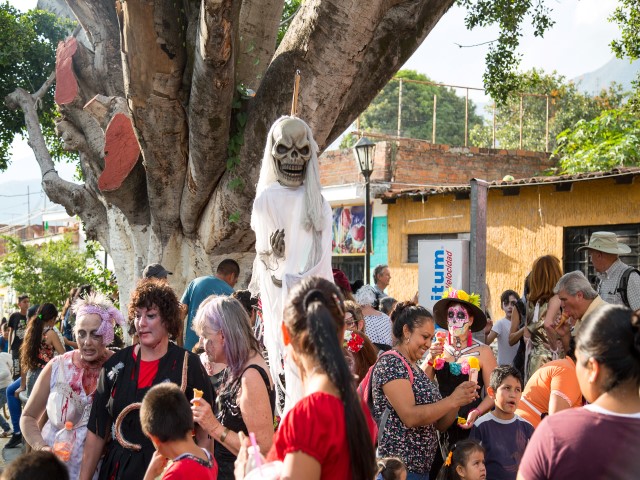 Here is a quote from the Thriller website that sums up the dance: “And lastly, our hope is that by witnessing and/or being a part of Thrill the World, you see for yourself that any dream, vision, idea, passion you have CAN be realized. Who would have thought we could inspire the world to dance with us? At the same time! Nothing is impossible. Impossible just means it hasn’t been done yet. Do the impossible.”

Until next year—– KEEP ON DANCING!