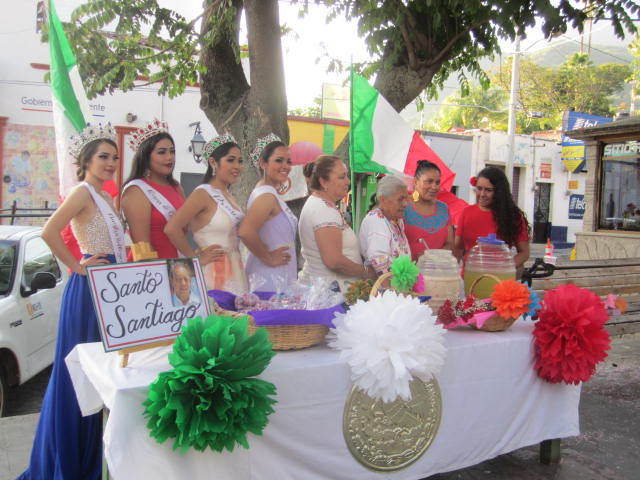 The final event of the week long Independence Day celebrations was the Combate de Flores (flower war). It was held in the Ajijic plaza at six in the evening on September the 16th, Independence Day.

War of the flowers couldn’t have been further from it’s name. It was a peaceful, low key gathering, especially appreciated after the previous sometimes overwhelming events. Maybe because this event was mostly done by and for the women.

Many years ago, long before the internet and cell phones, Mexican parents were very protective of their young women. They were closely watched. The Combate de Flores was an opportunity for young men to see the women and make their interests known by giving them flowers.

Last year Ajijic’s seven barrios participated. This year, there were five. The two queens and two princesses went around to each barrio booth and posed for photos. I missed two of them. They were fast.

Back to the tradition of this event. If the young woman liked the young men, she kept the flower and then he would walk with her. If she didn’t like him, she refused it. And he would go back to continue walking with his buddies. (Most likely, feeling humiliated.) The men also walked around the plaza but in the opposite direction from the women.

The event has evolved through the years to become a community experience rather than a romantic dating situation. The barrios in Ajijic sponsor it now. They provide decorations, flowers, confetti, punch and labor to make it successful.

Each booth had two different homemade punches. One spiked with alcohol, one not. They let people know which one was spiked. Some of the punch was free and some was sold for a few pesos. The money from the sale went to a fund for the barrio. Each barrio has a local party once a year. I hope to attend one and I will write a post.

Since there are seven barrios in Ajijic, that means seven more parties a year that I could possibly attend. I can’t keep up with all the parties here. Mexicans know how to enjoy life. That was made abundantly clear to me this past week of festivities.

I liked seeing men in the booths. One man was making little flower bouquets for people to give away. They also had baskets of confetti for people to throw at each other.  Which they did, with gusto.

These days, instead of the emphasis on romance it is on everyone, young and old, single and married. Throwing confetti and giving away flowers is central to the fun. No one walked away that night without a confetti shower.

The two friends in the above photo were having fun with the Confetti filled eggs.

If you managed to miss getting covered in confetti, there was always a chance of having a confetti filled egg cracked over your head. The barrio booths supplied the eggs.

The children were cracking eggs on each other and on the cement and the benches. They did a great job of helping to spread the joy with little specks of color.

Every holiday has it’s own symbols. Parade routes are usually marked by flying papel picados. Parties are decorated with them, Plazas, restaurants, etc. They are everywhere.

But as you can see in the above photo, they aren’t paper now. They are plastic, so they will last longer. And they aren’t handmade. That is too time consuming.  They are machine stamped.  They are still beautiful. Just no longer a handmade art form.

Above was the final photo opportunity of the group of royalty posing together before they led the procession.

I liked the above photo because the beautiful young girls were bathed in light. They looked angelic to me.

In Mexico, elderly people are respected and integrated into the community. They usually live with their grown children. They are as involved with social events as the younger people.

Royalty led the parade with baskets of confetti and flowers to spread to the crowd. They were helped by a young man. I liked seeing everyone involved.

The band quickly followed. They must have been tired because they had been playing for a long time already in the gazebo.

After the royalty came the barrio members. Without them, the event wouldn’t have happened.

Men like to believe that but from my limited observations of living here twelve years, I see the women in control inside and outside the house. Their presence is often behind the scenes but a strong, moving force. They are the bedrock of Mexican society.

This did not turn out to be a procession of young girls looking to receive flowers from young men. It was a procession of mostly middle aged and older women giving flowers and showering confetti on the crowd.

It was fun seeing the beautiful young Mexican women in the procession but I enjoyed seeing the older women even more. Their beauty radiated from within, from their memories of full lives. They are the heart of Mexico.

These days, young men and women meet easily without the parents overseeing them. Parents cannot control their girls in today’s open and free society. Everyone has a cell phone.

If a young man wants to tell a young woman that he likes her, he only needs to ask her for her phone number. If she doesn’t like him, she can quietly say no or maybe give him a wrong number.  No more risking public humiliation by a girl rejecting his offer of a flower while his friends watch. So it is a different event. I think more fun for everyone. It was one of my favorite events of this past week.