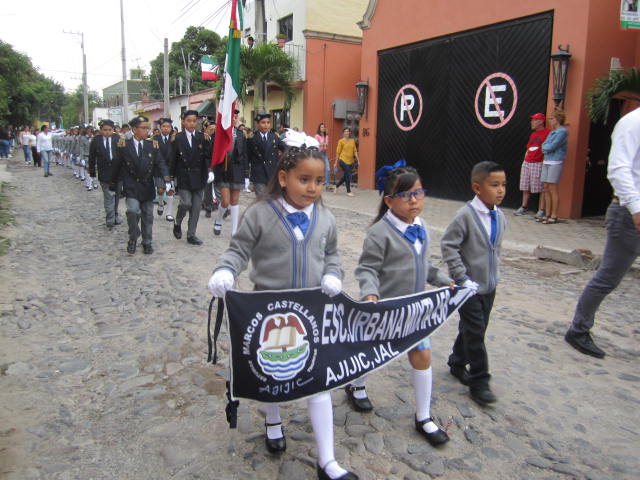 The final day of the festivities was on Independence Day, Monday, September the 16th at ten in the morning. That means exactly ten in the morning. One year I arrived a few minutes late and it was already two blocks down the road. This parade always starts on time. I wonder if it has anything to do with all the teachers involved.

The parade is mostly made up of children marching with their teachers and parents walking along beside them. The younger the children, the more the helpers and watchers.

This year I arrived early so I  could take some photos before it started. I liked the little boy in a suit. I don’t know why he wore a suit but he was a dapper young man. He just needed his mother to tie his shoes first.

The girls were having fun with each other with their own parade as they walked to the parade.

The police always start parades here and often they are also at the end.  They keep a close watch along the parade route so they can avoid trouble before it gets out of hand.

When I first started watching parades here, I rarely saw girls playing the drums or any other musical instruments. But through the years more girls have become part of the marching bands, drumming and blowing up a storm. Good for them!

For awhile I stood across the street from the house with the flying Mexican flag. I liked watching all the people and animals coming and going out if it.

Those three boys found a high place for watching the parade. They saw me photographing them. One boy was camera shy.

I don’t know why those three boys weren’t in the parade. It seemed like every school boy and girl for miles around was marching in it. Each school had a banner in front, carried by children in that school.

There goes the dapper young boy in the suit. He was walking beside the girl wearing the long turquoise dress. Maybe they were representing the upper class Spanish? I don’t know. There was no one around for me to ask.

More children marching. Blocks and blocks of marching children of all ages.

The teacher was whispering something into the young girl’s ear. She wanted to get the children to march at arm’s length from each other. The girl’s eyes are half closed. When I took this photo I didn’t notice if she was blind or not. But she appears to be very disoriented. The teacher was trying to help her.

Some of the smaller children rode on the backs of trucks. Makeshift floats.

The children were enjoying the ride and waving to people along the side of the road.

This parade was mostly marching children and horses. Horses usually come last but the marching band came after the horses in this parade.

One of the Escaramuza girls was riding past in her beautiful dress. They ride sidesaddle. They ride in patterns towards each other in the ring. It is exciting to watch and looks dangerous.

Above were the leaders of the horse association here. They were carrying banners with their association name on them. The Cowboys have a lot of political clout. And they are in every parade.

I liked the dress the little girl in the above photo was wearing. There are always young children riding in the parades. Sometimes they ride with their parents and sometimes alone. They learn in a very young age about horses and riding.

The horse in the above photo was scared by the marching band but the rider quickly got things under control. The cowboys and cowgirls here are excellent at handling horses. Many of them came from generations of horse owners. They are well respected in the community.

The white horse on the left was doing a bit of dancing.

The marching band started up as they were walking behind the horses. Some horses freaked out and people on other horses went over to contain them. But other horses immediately started dancing.

Baby’s first parade. I wonder how many parades that baby will watch in his  lifetime.   I am guessing that the green blanket meant a boy. Notice how carefully the father is holding the baby.

The marching band was at the end of the parade.  Until next year….. or  next month….. there seems to be a parade about every month. ADIOS! And Happy Independence Day!