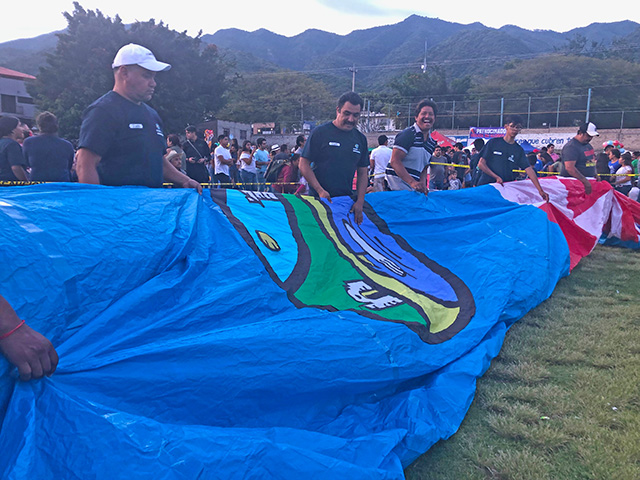 The 2019 Globos festival was held in the Ajijic soccer field on September 8th. You can see the black sky behind Access Lake Chapala’s angel globo. Every year there is a possibility of rain. This is the rainy season. But this year there were just a few clouds. It was good luck. Not good luck for this angel. It quickly caught on fire.

It takes a lot of people to launch a globo. If it isn’t held up straight every few feet, it turns down and burns up. You can see the young man under it, adding the gas so it will fly. That is the Si Lupita team.

This child was in a big hurry to get into the Globos action. His young mother couldn’t keep up. It was supposed to start at three but Mexican time runs much later. Almost two hours later.

You can see that the field was almost empty at three. Not much to do unless you wanted to gorge on all the delicious foods that were cooking in the various food stands. They were ready at three.

How about some heart healthy hot dogs and fries?

There were many more stands set up inside the field this year. Most of them were selling food. Some sold toys and balloons.  I liked the food display that was in traditional clay pots in the above photo.

The stand in the above photo was set up outside the gate. Tempting! More heart healthy food.

Globos are made out of thin paper. Various teams start making them a few months before the event. Businesses, groups and individuals hire teams to do this work and also set up and launch the Globos. Each team has a logo and the members of the team wear special T-shirts. This team was having lunch before going to work. Seems like a fun job.

Si Lupita was the team that made and launched the two Globos for Access Lake Chapala. This year Access had it’s usual stand with a cover for shade, chairs for more comfort, food and drinks. All for the team, the realtors, friends and family. It was like a party within a party. Is there such a thing as having too much fun?

Above is a photo of one of Access Lake Chapala’s Globos. It was very large. The bigger the globo, the harder it is to make a successful launch. If the globo is an unusual shape, it is even more likely to fail.

The first one in this article was too complicated and didn’t make it. But  in the end you will see this one launched. Success! One out of two isn’t bad, especially for such large ones.

These first globo photos are of them being blown up. It takes a lot of time and effort to do this and they can quickly catch on fire. The second set of photos are ones that made it. Then two that didn’t.

I think that more Globos burn up before getting launched or after just a few feet up than ones that make it.  So no one is shocked or too disappointed at them. All the more fun for loud booing and high fives when they are successful. (The one above didn’t make it.)

The smaller Globos were launched first. The large ones were sent up later in the day because they needed absolute calm. Too much wind would blow them to the side and cause them to burn up. The smaller ones were far easier to manage and more likely to go up. The larger ones were more fun to watch. Riskier in every way.

The team member on the ladder had a precarious Looking job. He didn’t seem concerned for his safety. He helped make this Globo a success. You can see it seven photos down from this one.

You will see the above Globo flying high in the third photo below this one. It was worth all the effort and time it took to fill it.

The globo in the above photo was a great success, in spite of it’s shape. Six photos down from this you will see it in all it’s glory. Look at how many team members it took to hold it upright. What a surprise that it didn’t tip over and burn up once it was launched. I wouldn’t bet on which ones made it and which ones burned up. The luck of the draw!

Mexicans and Expats alike share in the Globos event. It is a great place to meet and make friends. I love to watch the faces of children as they watch the Globos.

The globo in the above photo went up a long ways. That was surprising because of it’s shape. The more complicated the Globo, the less likely that it will fly.

There were far more people walking around in the field than there were sitting in the grandstand. Those seats get hard after a couple of hours and it is impossible to see the Globos that fly behind the grandstand.

Sometimes tails are added for extra weight to keep the Globos from tipping over and burning up. And signs advertising the owners are on the tails.

The above globo got lots of cheers. Each success is a success for everyone watching too.

Even in it’s side the Globo in the above photo managed to survive. That was surprising to me. I would have lost money on that bet.

I liked seeing all the umbrellas at this event. Mexicans use them for shade and to keep the rain off. They are always prepared.

Everything is green now because of the rain. No one worries about being caught in the rain. It comes and goes. And clothes quickly dry. Look at the clouds in the photo below.

The above globo was stuck on a tower. Sometimes they come crashing down into the spectators or they fall miles away. I was told a story about one, years ago, that fell into a corn field and burned it up. This can be an exciting event but watch out for burning globo pieces.

It was dark by the time Access Lake Chapala’s second globo was ready to launch. And it was a success. Congratulations to team Si Lupita and all the other helpers!

We start and end with an Access Lake Chapala globo. Lift off, UNTIL NEXT YEAR. I wish you all flying high times. No going down in flames and let’s meet here again for next year’s Globos.