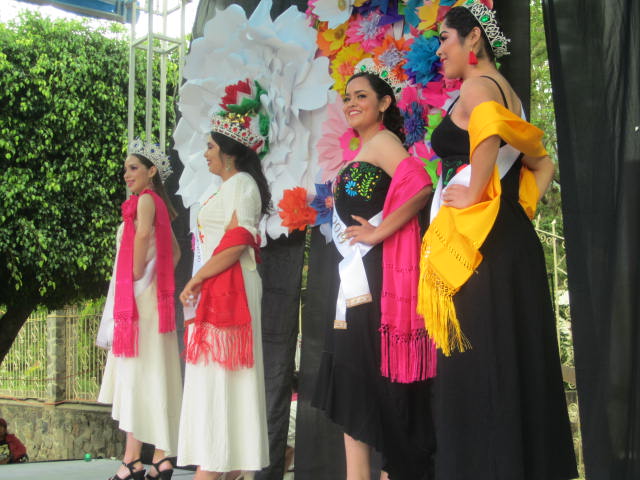 The Rebozo Parade (shawl parade) is one of the first events in the week long celebrations of Mexican Independence Day. Independence Day is on September 16th. It marks the beginning of the revolt from the Spanish born ruling class. El Grito (the cry) was read on September 16, 1810 by Father Miguel Hidalgo y Costilla. The war ended eleven years later on August 24, 1821.

Mexican flag stands and walking salesmen are all over town during this time of the year and red, green and white colors are everywhere.

Rebozos have been part of Mexican culture since the mid 1500s. No one knows how they started. But the poor Mexican women have used them for everything since then, including wrapping up babies and carrying them on their backs, carrying firewood, for warmth, for church, etc.

The rebozos are woven and always have fringes. They can be different lengths. They are made out of cotton, silk, or rayon.

The above photo is a typical scene all over the world now. The child is lost in her phone, oblivious to what is going on around her. The mother has what looks like a cotton rebozo. She is wearing a traditional embroidered dress.

There are several winners of the parade, based on age categories. The winners are presented with bouquets of flowers and a new Rebozo.

There were many women in the plaza who were not part of the performance but they proudly wore their rebozos.

At every local event, there are industrious people walking around, selling homemade goodies. This girl had delicious looking sugar cookies. I bet her mother baked them.

I am a sucker for Dads with their children. This dad was waiting for the event to begin but he was contented just to sit with his daughter in his lap. He was in no hurry.

The judges were checking out a rebozo with their expert eyes.  This one was reversible, with a beautiful pattern of flowers.

This event has been going on for many years. At one time they walked around the plaza but that became too difficult to manage. Years ago, young men fell in love during the plaza walks. Now it is an organized modeling show instead of a casual walk around the plaza.

The above rebozo looks like it is made out of silk. Silk rebozos are expensive. One good test of the quality of a silk reboso is to see if it will pass through a wedding ring.

The women are so beautiful that it is difficult to just focus on their rebozos.

The model above is wearing her rebozo as a blouse. There are many ways to use and wear rebozos.

The little girl above has her rebozo draped over her head.

The young girl in the above photo is dressed in a traditional Mexican costume. I like comparing that to the girl at the lower left of the photo, wearing a typical present day T-shirt. How times have changed!

The Rebozo in the above photo also looks like it is woven out of silk. This is becoming a dying art. It is too time consuming to weave them.

An image of Frida Kahlo is on the back of the above rebozo. Her image appears everywhere in Mexico. She has become a symbol of freedom and creativity for young Mexican women.

Above are four of the models. After they walked the runway, they lined up on the stage. Beautiful women, showing off beautiful rebozos. I wouldn’t want to be one of the judges.

The moderator  is in the above photo. She did a great job of keeping things moving and professional.

The singer, above, is also wearing a traditional Mexican dress and a rebozo. She has a powerful voice. She entranced the audience with several songs.

The photo above is only about half of the audience. Some people are looking bored. I took it during a break in the performance.

Do you think this family could get any closer together?

Ajijic is for everyone; families, single people, lovers. Young people. Old people and everyone in between. The best part of taking photos of the events here is seeing so many smiling faces. My favorite photo is the last one.  The smile of a hopeful child of the next generation!