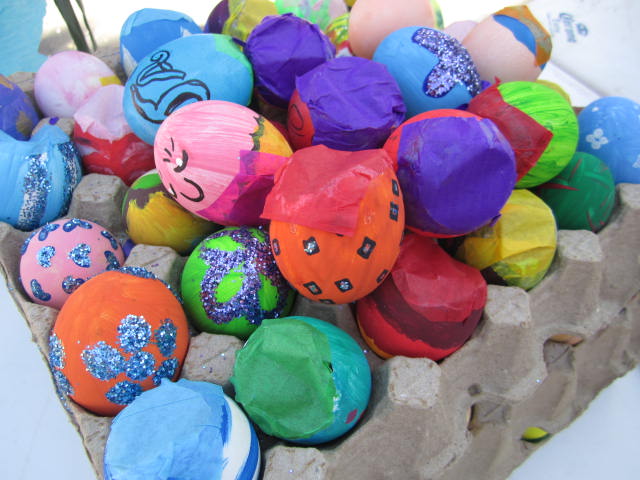 La Verbena del pasado, translated into English, means the Street party/dance/celebration/event of the past. And this event celebrates all the food cooked in the past in Mexico. Food that is cooked the traditional way, over an open fire and served in the traditional red clay dishes.

This all happens at the Ajijic plaza. It is the beginning of Semana Santa, Easter week, Holy Week. It started on Sunday, April 14th and ends on Saturday, April 20th.

It is a community effort to raise money for next year’s passion play. It also is the first event of the passion play as the chosen Jesus walks with his disciples and his donkey from six corners to the church by the plaza.

This walk represents the triumph of Jesus Christ as he enters into Jerusalem as foretold by the prophet Zechariah. Palm branches are waved at the victory of martyrs or victory of spirit over flesh. It was on a Sunday and is now celebrated as Palm Sunday.

At one time, the streets here were covered in palm branches for the walk but palms are hard to get. Now they are covered in alfalfa shortly before the walk begins.

Instead of people waving palm fronds, they now wave palm weavings. These can be very intricate or simple and are sold before the walk by people from the outlying villages of Ajijic.

But I am getting ahead of myself. Back to the beginning of the evening and all the food stands. I had a delicious tostada and then a piece of lemon pie.

The rice pudding  looked good but I couldn’t taste everything. By six in the evening, all the food booths were busy.

The stand in the above photo was the largest one there. They did a lot of business.

Imagine how many pottery dishes would have been used at all the stands. Some stands cheated. You can see a plastic plate and some glass on that table. I couldn’t resist putting on a photo of a man washing dishes. A rare sight and something to celebrate (at least for the women to celebrate.)

This event marks the beginning of one of the biggest celebrations in Ajijic. It is not only a time to celebrate Easter but also a time for family and friends to get together and celebrate their lives.

Added to friends and family is the special relationship between lovers. And the Registro Civil was a chance for lovers to have a pretend wedding ceremony, along with a certificate of proof of their love. Hopefully, the next step will be a real wedding. Check out the happy faces of the couple in the above photo. They just “got married”.

I liked the above photo with the smiling mother and not quite happy child. Also, I liked getting the church in the background. This was the first church in Ajijic. It was built in the 1500s.

There was music all evening long. First a rambunctious drummer and then the brass band played in the gazebo.

Above is a photo of the drummer as he stands on his stool. But he was there only briefly. From the stool he jumped back to the ground and never stopped moving to the recorded music. I think he made more noise than all the musicians playing in the gazebo.

I took the photo above outside of the celebration. It was a huge pot of cooked yams and squash.  This beautiful pottery container can often be seen in town.  I imagine not much has changed for a hundred years as far as how food is cooked for large groups. Some things never change.

Above is a photo of alfalfa being strewn on the street. It was almost time for the procession to arrive from six corners.

Objects made from palm fronds were proudly displayed near the church. Some were crosses. Some looked like Jesus on the cross. Some were just designs. These were sold for very little money. It was fun watching them being woven so carefully. Each one was like a miniature sculpture.

These palm sculptures were carried by people walking in the procession behind Jesus. They often are proudly displayed at the entrance of people’s homes, as reminders of this Easter season and the sacrifices made by Jesus. Even if you are not religious, it is still a pleasure to see these beautiful objects.

This boy was standing at the gate of the church. Looking in. I wonder what was on his mind. He appeared to be having some deep thoughts. And I wonder if he was the creator of that sculpture or if he was just the salesman. Beautifully done.

The children in the above photo were waiting for Jesus and his disciples to arrive. They would then join the walk but in the meantime, they played around.  Boys will be boys. And girls will be girls too. Even if they are part of a serious procession.

I put on two photos of Jesus in the procession because that was the highlight of the evening. He came by very quickly. I didn’t get a good photo but my friend donated the one below. He was quicker than I was with our little cameras.

You can see part of the crowd following Jesus and his disciples. It was a somber group. Many carried the palm sculptures. Those were used instead of large palm fronds.

Above is the last of the disciples in the processing. The photo below is of the people following it. Check out all the palm sculptures they are carrying.

I was tired at the end of the procession and went home so I missed the night events. Next year….. At nine pm they turned off all the lights for half an hour and only had candles and gas lanterns. And people threw the eggs filled with confetti at each other. I missed it all. Oh well, there is far too much going on here to see it all. So here are some confetti eggs for you to enjoy.

Happy Cascarones on your head and Happy Easter!