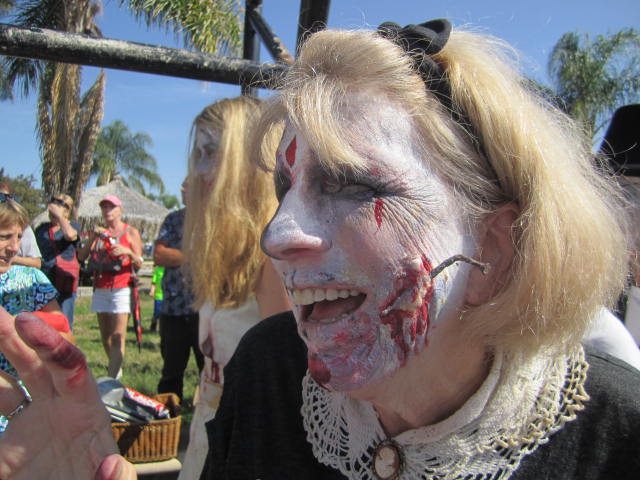 The 2018 Thriller the World, TTW, Dance was held this year on Saturday, October 27th. It is always the Saturday before Halloween. There were a hundred participants. The age range was from 85 years old down to 4 years old. I am not sure yet, but they may have broken a world record for the group of oldest Thriller dancers in the world.

They had been practicing for many weeks for the dance, led by Valerie Leigh. She is the zombie in the green dress on the stage.  Above is a photo of their final practice before going out into public with it. And below are photos of the makeup session.

The Thriller Dance was created by Ines Markeljevich in 2006. She started it in Toronto, Canada with 62 dancers. She is a dancer by profession. She took two hours to teach the dance to these 62 people. Her goal was to unite the world by everyone dancing the same dance at the same time to create global unity.

She used Michael Jackson’s Thriller because people of all ages relate to it. Two other goals of having the world wide dance are to raise money for charity and to break Guinness world records.

That first Thriller broke a Guinness record for the largest group doing the Thriller Dance. By the next year, 2007, the dance had spread to many other countries worldwide. Other Guinness records have been broken since then involving the Dance and dancers.

Any group can join in the fun by signing up on their website: www.thrilltheworld.com but the Dance has to be done on the same day and time as everyone else in the world.

The TTW dance in Ajijic started at the Ajijic Plaza a few years ago. It was created to raise money for the Red Cross. Volunteers would collect money in the crowd and eventually they set up VIP chairs at the front of the Dance. You could sit there if you paid a fee but not many people did that. They could see the Dance from the sidelines without paying.

This year they moved the Dance to the Ajijic malecon. They set up more VIP chairs and charged a fee for the privilege of sitting under a tarp in the shade and having food.

This new idea brought in a lot more money for the Red Cross but it was so hot in the sun for the nonpaying audience that I wouldn’t have been surprised to have seen the Red Cross there helping people.

But all went well and everyone had fun, even in the hot sun. After the final practice session, the zombies did a zombie walk from the Ajijic Plaza to the malecon.

Although the first Thriller Dance was taught in two hours, it is now taught in many practice sessions starting a few weeks before time for the performance. It isn’t easy. Six minutes of dancing is exhausting. Plus all the zombie walking from place to place.

The zombies had to walk from the plaza, down to the malecon, to the end of the malecon and after the Dance, to six corners and dance again and then back to the malecon. Did I mention that it was hot?

I didn’t walk with the zombies on the malecon or to six corners. I went to the basketball courts at the end of the malecon early so I could get a place to stand close to where they were going to perform. I put on the above photo to show how high the lake is now. It is up to the malecon. I have been living here twelve years and this is the highest I have seen the lake.

Above is a photo of the new Ajijic sign on the Malecon.  People were having their photos taken with it when I was walking by on my way to the basketball courts. I read that on Sunday the 28th of October there would be a dedication ceremony for the sign.

Above is a photo of part of the VIP seats. It was early so they weren’t full yet. But they filled up before the performance. 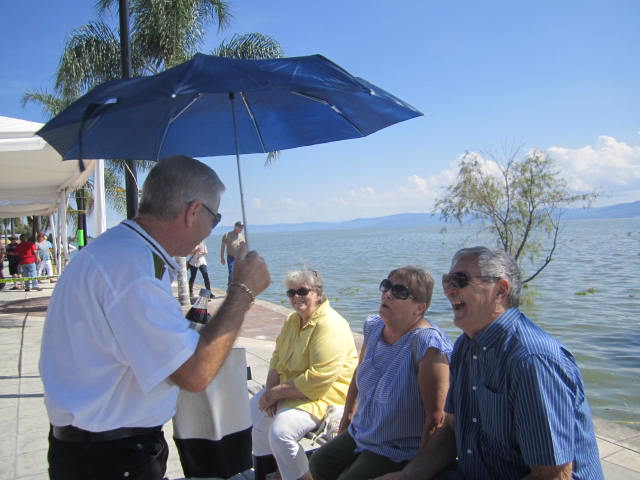 The rest of us sat on the cement benches, if we were lucky, or the lawn or stood as close as we could to the stage area. The man in the photo above was teasing the people seated, offering the use of his umbrella for a high price.

The woman sleeping in the above photo had the right idea. I was so tired of standing in the hot sun by the time of the performance that I thought I could have used the Red Cross. Fortunately, I was allowed to buy a cold beer from the VIP section. Okay, two beers. They saved the day for me and I am not even a drinker of alcoholic beverages.

The zombies finally arrived and I was standing at the exact spot where they entered the staging area. I got some good closeups of their faces. Scary! Check out the nail.

How about that spider? More spectators were also coming into the area and the lucky ones who paid for VIP seating were filling it up. Now why didn’t I think of buying a ticket? Next year…..

Above is a photo of all the zombies walking onto the basketball court to start the Dance. Look at how green the mountain is behind them. We are coming to the end of the rainy season and everything is green with lots of colorful flowers everywhere. It is a beautiful time of the year here.

Standing room only for the nonpaying audience. Look at them behind the yellow tape. Because I got there an hour early, I got a better standing area.

Even though I was tired from standing in the hot sun, I was glad I had arrived very early and secured a place with a good view of the makeshift stage.

I don’t know how much money was raised for the Red Cross or if they broke any Guinness world records but I do know that I had a great time and everyone around me, including the zombies, seemed to have enjoyed themselves too. How about another beer?

Above is a photo of two of the youngest dancers. There were a lot of different steps to remember but they did their best to keep up.

I went home after the dance but my zombie friend said that after they danced at six corners and returned to the malecon, they ate roasted pig and chicken and other delicious food.

There are many more exciting events that will happen after the TTW dance. I am looking forward to them all.