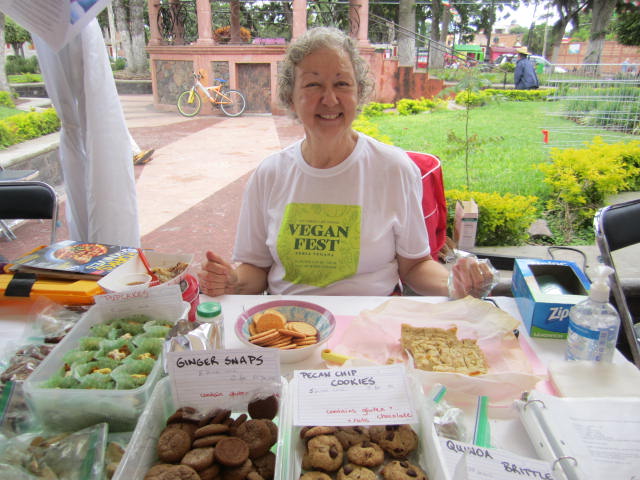 The first annual vegan festival was held on Saturday, September 29, 2018 in the San Antonio plaza in Lake Chapala. I had seen many posters advertising it all over Ajijic and also a page and a half article about it in the Guadalajara Reporter.

Above is a photo of the outside of the tents..I decided to go, not expecting much. I have been to countless events in this area that turned out to be sparsely attended. And first ones are often the worst.  But I was pleasantly surprised at this event.

Maybe it was such a success because of all the advertising or maybe the vegan community is much larger and more active than I had imagined. They certainly were more organized than any other first event I had attended.

It was a beautiful day and there were many different venders. The article in the papar said that twenty five venders were expected to participate. I didn’t count them. I just enjoyed their various tables.

Most of the venders were selling food.  The food, vegan of course, had been made by the venders. Men and women, Mexicans and Expats all participated as venders and shoppers.

There were also various kinds of drinks including ginger beer, kombucha, coffee and chocolate water.

The man in the above photo was selling different kinds of sprouts. He was very attentive to people who had questions. One of these days I would like to try growing some sprouts. Maybe this event will spur me on to try. I watched some of the food demonstrations and they encouraged me to do more vegan food.

Maybe one reason that the vegans are so friendly is their philosophy. They believe in nonviolence. Not just against animals, but all of nature, other people and ourselves. Vegetarians are less restrictive in their eating. For vegans, their restrictions cover far more areas of their lives. It becomes almost like a religion. At the center is their respect for all of life.

One vender did chair massages. I would have done that but there were too many interesting things to see and eat. I couldn’t sit for that long.

When I looked at the food in the above photo, I couldn’t tell that there was no meat in it. It just takes imagination and creativity to make vegan food that is just as good and probably tastier than food with meat.

Narcisco, the pig, was the Vegan mascot. Mostly he was busily eating grass. He was a portable, organic lawn mower. Cutting grass and fertilizing it at the same time.  But they took him out of his moveable cage from time to time to remind everyone that eating bacon was a crime against pigs, which are gentle and smart.

The event lasted from eleven in the morning until seven at night. Above is their schedule. Lots of cooking demonstrations, information about being a vegan and personal testimonies. If you make the above photo larger, you will be able to see the schedule. Something was going on every hour of the event.

Greg Laviolette is one of the organizers of this event. He gave lectures and demonstrations. Two other organizers were mentioned in the Guadalajara Reporter but I didn’t catch up to them.  Eduardo Espindola and Laura Garcia.

Above is a group photo of the people involved with making this event a huge success.

Narcisco did his bit by just being a pig and reminding people that bacon comes from having to kill pigs.

The Ranch had helpers with some sweet dogs that were up for adoption. They also had cats but they were in a cage and hard to see.

Above is a photo of some of the dogs, waiting to be adopted. I like the pink dress on that female dog. I wonder what she thought about having to wear it. Did it make her more attractive to the boy dogs? Probably not.

Every town in Mexico has a plaza with a gazebo. Social life revolves around it and the Catholic Church which is usually close to the plaza. I decided to take some photos of the area surrounding the plaza.

San Antonio is an old city. It is small compared to Ajijic. It has around five thousand people. But it is quickly growing. Expats are moving into new housing complexes and there are many new restaurants. Several restaurants are near the plaza but most are on the carretera which is just a few blocks north of the plaza.

If I didn’t live in Ajijic, I would live in San Antonio. It is a quiet town but there are still many things to do. Everything is within walking distance. There are a couple of shopping centers on the carretera, including Wal-Mart and many restaurants.

Buses go through San Antonio every fifteen minutes and it costs just a few pesos to go to Chapala or Ajijic. Housing is generally less expensive in San Antonio than in Ajijic. The lake is just a few blocks south of the plaza, an easy walk.

The Catholic church is across the street from the plaza. They are on a large lot with a rose garden and other flowers.

I quickly snapped this photo of the inside of the church because I loved all the flower arrangements. Nothing was going on at the time. Maybe there was going to be a wedding, or a funeral.

Above is a photo of what looks like the remains of the first church. I was told that the buildings surrounding it are used as a school.

The Guadalajara Reporter quoted Greg Laviolette, “Being vegans, we wanted to do something educational about veganism, especially for the Mexicans and teach them that being vegan is more than just what you eat.”

Every Mexican town that I have seen has it’s chicharrón stands, like the one above. Pork belly and pork rinds deep fried in a copper pan. That will be hard to overcome for the vegans who want to convert the Mexicans.

Above is a photo of the kitchen in Cafe Adilita’s. This is a popular place for the Expats. Once a week on Thursday evenings,  a group called the Breakfast Club, meets there for dinner. (I don’t know why they call it the Breakfast club) anyone is welcome to join. The food is half price for them on that night.

Before leaving the plaza, I noticed the banner above the building across the street. A museum will be opening up there soon.

This vegan restaurant is the only one in the area. It is owned by Laura Garcia, one of the organizers of the festival. The restaurant has been open for a year and has become very successful, even with people who aren’t vegans.

It was quiet when I took this photo. Everyone was across the street at the festival.