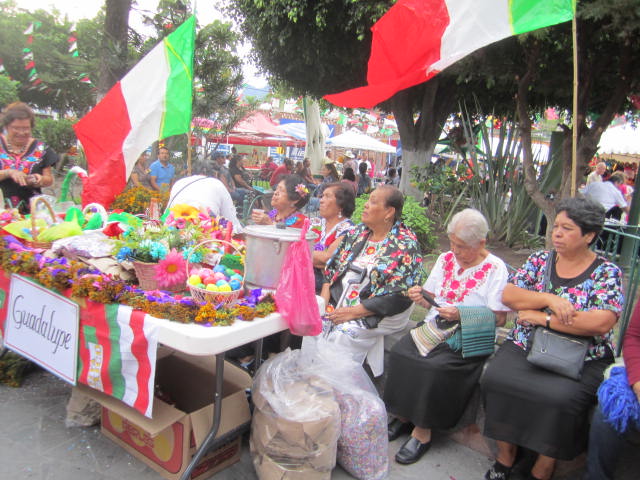 Combate de Flores, means war of the flowers, it is held each year in Ajijic, Lake Chapala Mexico. It is actually the opposite of war. It is a mating ritual, about love. It started when Mexicans all over the country got rid of their guns after the War. It was the exchange of guns for flowers.

Plazas in towns of all sizes  started a tradition of using flowers as a way for young men to express their interest in young women of their choosing. The women could accept that attention or not.

The man on the left in the above photo, the fourth cowboy hat back, is sound asleep. Quite a talent with so much noise and activity. He had a long nap. I checked on him throughout the evening. Wish I could sleep like that in the noise of Mexico.

But back to the ritual war of the flowers. The band played a traditional song called “Papaqui” while the boys walked in one direction around the plaza and the girls walked in the opposite direction.

Several things happen during the parade. The boy hands the girl he likes a flower in one round. When they meet again, in the second round, the boy asks her for the flower back. At that point she has a choice. She can give it back to him if she likes him or, if she doesn’t like him, she can say, “What flower? I didn’t get a flower.” 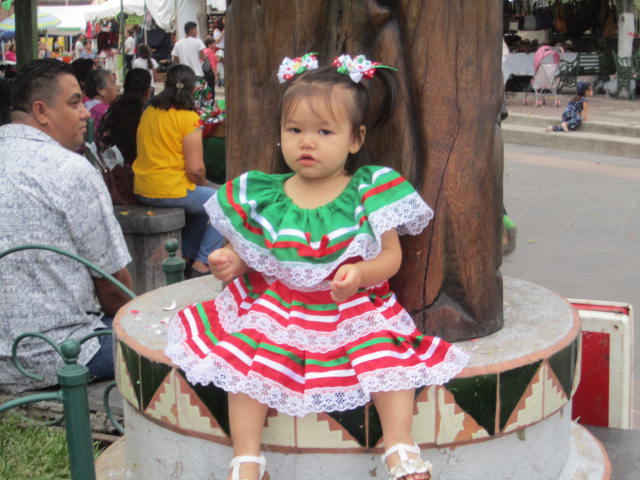 During this time, more confusion is added by everyone throwing confetti or just directly breaking the confetti filled eggs on the heads of people around them. I got an egg on my head. The confetti is difficult to get off. I had it around on my floors for days. Sweeping wouldn’t get it all off.

Five barrios in Ajijic were represented in the plaza. They gave out the flowers, punch, eggs and confetti.  I doubt if anyone at the plaza that night got away without confetti all over them. Great fun, especially if you are the one throwing the confetti rather than the receiver of it.

These barrios have been areas of Ajijic from the beginning of the town.

The Barrio San Gaspar didn’t have many representatives but they had lots of flowers, eggs and bags of confetti to give away.

Barrio Guadalupe had the most representatives at their stand. It was from the six corners area of town.

The stand above had all the necessary equipment for the war of the flowers plus Guayaba (guava) juice. It was delicious. Other stands also had pomegranate juice with tequila in it, just for the adults. That was also delicious. I had two of those glasses.

There were many gifts left over from the Children’s games the night before so they were given to various people in the crowd. The announcer might call, “This gift goes to the woman wearing a yellow dress”  or ” to the girl with a red flower in her hair.”

Some of the gifts were nice. Some weren’t. The girl in the above photo was so excited when the announcer said, “This gift goes to the girl who is wearing black.” She almost flew to the announcer. Her gift? A broom. Maybe the joke was that if she was wearing black, like a witch, she could use a broomstick. The girl was a good sport about it. She laughed all the way back into the crowd.

The band played traditional Mexican songs. The yellow flowers woven into the bandstand were the kind given out to the boys. I was told that at one time there were many fields of them in Ajijic. Not enough open land now. All houses. But around Colima there are many fields of them.

Many women at this fiesta wore their beautiful rebozos (shawls). This one was hand embroidered. Too bad she missed the Rebozo parade. She might have won. Hopefully, not a broom.

The plaza is filled with blooming flowers and trees. The rains make everything green and fresh. The tree above where the man and his children were sitting was aglow with yellow flowers.

I took the photo of the pig because it was such a surprise to see it as someone’s pet on a leash instead of the usual dog. It must have been a girl because of the pink bow. You never know what you will see in Mexico. 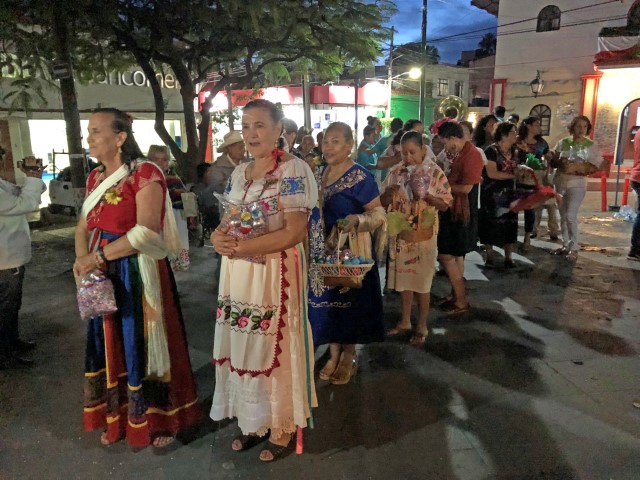 Above, the parade was just about ready to start. 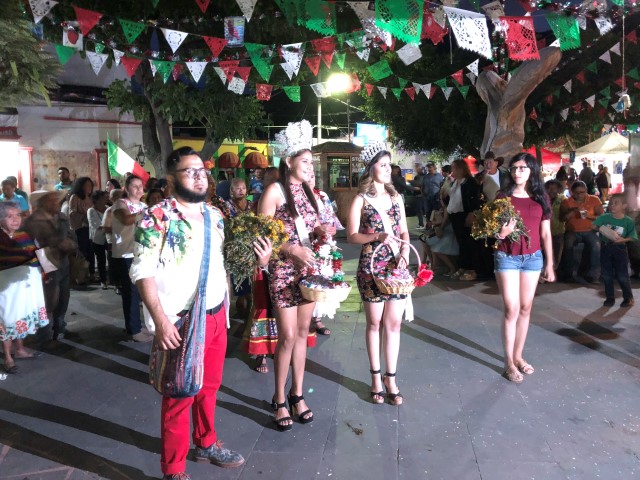 These last photos were taken at night. As the parade started people were throwing confetti everywhere. The band played and I bet that man with the cowboy hat still slept. 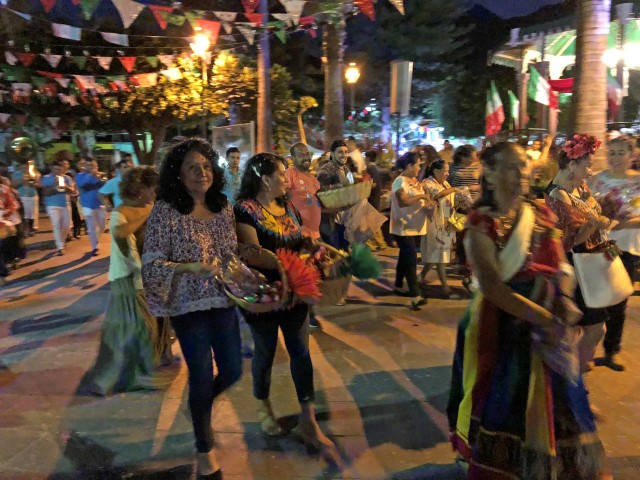 Many years ago, when girls were not allowed to communicate with boys and were closely watched, this was a once a year opportunity for the boys to express  their interest in certain girls without the girl’s relatives scaring them away.

These days it is mostly a fun event for everyone, in love or not. 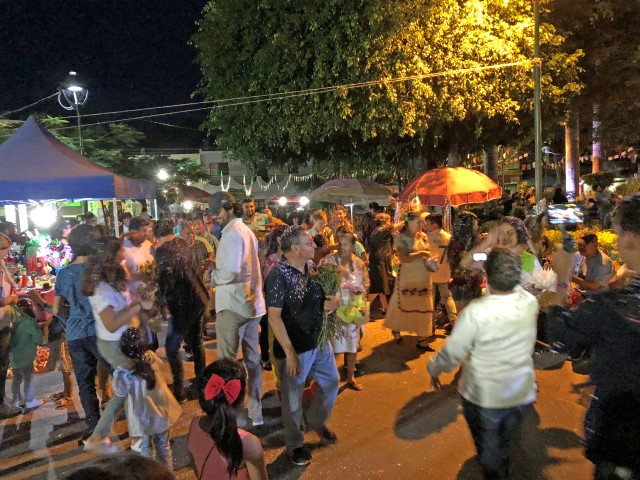 Many of the young boys and girls do not know these traditional events. That is why the owners of Access Lake Chapala donate their time and money to revive them for future generations. 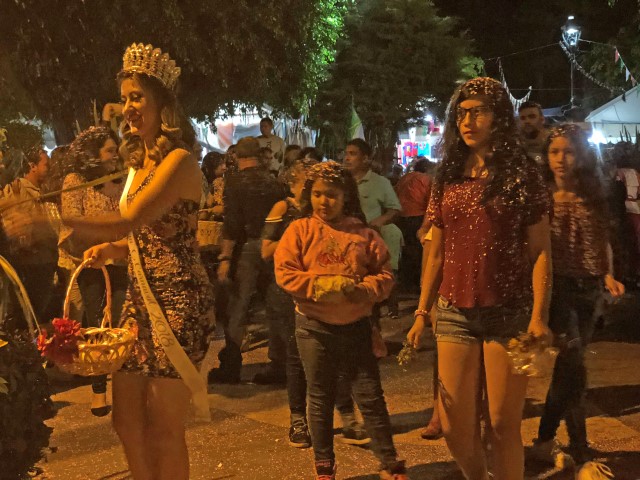 I wonder if any of the boys here were successful in winning the hearts of girls they liked. Before the parade started, I saw a couple of boys with flowers in their hands, looking very excited and anxious. 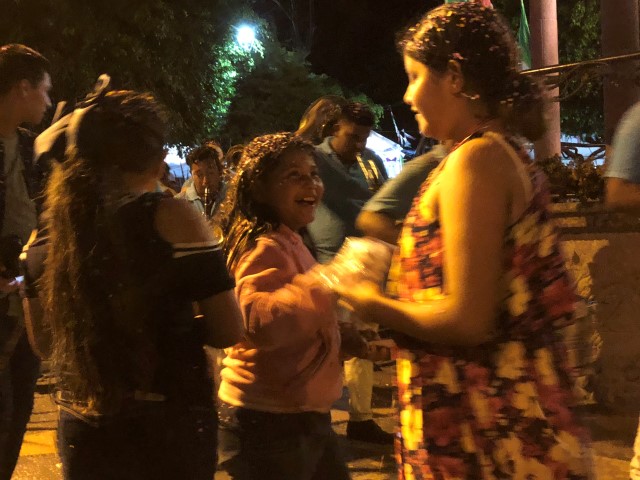 Another Independence Day event comes to a close. The last one of this year.

Next will be the Day of the Dead. It is never long between celebrations in Mexico. Now it is time for me to take a nap. Where’s my cowboy hat?