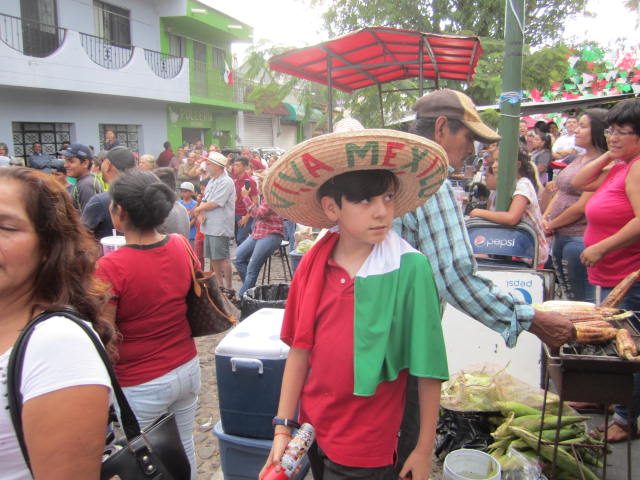 The children’s (and adults) games are held every year on the fifteenth of September in the Ajijic Plaza. Other events happen after the games. A mariachi band played this year and the reading of the Grito. Then more music and dancing. I wasn’t able to stay through all of the events but I saw the games.

The red, green, and white colors of the Mexican flag were seen all over town and especially in the plaza. Many people dressed in these colors. I liked the dresses on the girls in the above photo.

The green of the flag represents the hope for the nation and the independence movement.  The white represents purity and the purity of the Catholic Church.  The red represents blood of those who died fighting for independence.

A highlight of the games is always the greased pole. Boys form small groups and help each other to climb to the top for the prizes tied there.

Most of the time the boys fall down in a pile and don’t make it to the prizes. Hundreds of people are watching and cheering the boys on to victory. Also moaning loudly when they fall.

In the above photo you can see how tall it is and that boy is holding on with all his strength. The boys supporting him had all fallen down.  But he wasn’t going to give up. They finally regrouped under him to give him support. He climbed higher.

I took the photo above when the prizes were being tied onto the top of the pole, before it was raised. Many rolls of toilet paper, paper towels, breakfast cereal and a few soccer balls. A lot of difficult climbing for these prizes but I think the boys were more interested in the glory than prizes.

Finally, after many defeats, one boy managed to reach the prizes. Then others did it. Those prizes were hard won.

The above game looked easy but turned out to be difficult. The winner had to eat the entire apple first. Two of the boys couldn’t get a grip on their apples. The smallest boy must have had the biggest mouth. He won. The other two boys got to take their uneaten apples with them. Maybe they will practice for next year’s games.

The boys in the above photo were getting coins off of platters which were smeared with some kind of purple stuck substance. Then the girls had their chances.  They too ended up with the same purple smeared faces.

These men were in the beer drinking contest. One man just took a sip and then wanted to take the rest of the bottle with him. He must have had previous experiences with chugging entire bottles of beer so his plan was to pretend to compete but take the beer away to enjoy in his own time later on. The man running the contest wasn’t having it. He insisted on taking part of the beer for himself. All in good fun.

Next came the beer drinking contest for women. Only two women were brave enough to enter.

I took the above photo after both women had to take breaks. They both drank too fast. Almost half the bottle at one time. The bottle of tequila on the table was to be the prize. It looked to me like it was a tie but the judge gave it to the woman on the left.

Above is a photo of the hot chili peppers eating contest. Each contestant had to eat four green chilis and one Serrano chili pepper. The Orange drink was to help them cool down their mouths.

The winner of this contest was a woman. She entered a the last minute. I wonder how she felt the rest of the evening with all those hot chilis in her system. If she thought it had been worth winning the bottle of tequila prize.

These girls were having fun throwing confetti on each other and their father. Confetti filled eggs were sold in the plaza. Children would break eggs on each oeter’s heads, spilling out confetti. Fun but difficult to get it all out of one’s hair and clothing.

Cell phones were the center of interest for these children. The two children on the right appeared to be bored and were about to take off for more interesting things to do.

I have never been to any celebration here that didn’t involve food. This event had many choices from ice cerem to roasted corn to hot dogs and hamburgers. I had one of those bacon wrapped hot dogs. Delicious.

I always enjoy seeing children, and adults, expressing their love and friendship for each other by way of touching, either holding hands or arms around each other’s shoulders, like the boys in the above photo.

There is no fear here or shame in walking around in public places like that. Women hold hands, mothers and daughters and friends.  Boys and girls hold hands. I haven’t seen men holding hands but when they Greet each other they often quickly embrace and pat each other’s  backs.

Expats and Mexicans alike enjoy local events. Every event brings a crowd. This one was no exception. I wish I could have stayed until the end but I was too tired. Maybe next year….