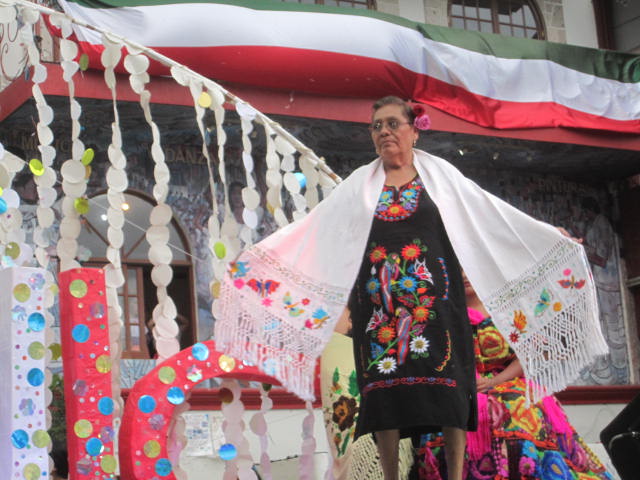 The Rebozo Fashion Show was held in the Ajijic Plaza the evening of September 9th, 2018.  I always enjoy seeing the women in their beautiful rebozos. In English, rebozo means shawl. So this event is to celebrate the shawls. And the women. It was supposed to start at six in the evening but they were on Mexican time, meaning an hour and a half later. In the meantime, I walked around the plaza taking photos. The first photo is of one of the women waiting to be in the fashion show.

Check out her lovely rebozo and dress. All embroidered. She will be in another photo later on in this article, showing her on stage proudly displaying her rebozo.

Above is a photo of some of the intricate embroidery on her rebozo. I liked seeing her hands folded and the other hand belongs to her  granddaughter.

Decorations are up all over town for Mexican Independence Day. Cars have flags on the mirrors and even large flags covering the entire hoods of some of the cars. Nights are filled with Mexican songs, laughter and fireworks.

Look at the designs on the cut outs. Bells are displayed on the red, white and green colors of the Mexican flag.

The little girl in these two photos is the great granddaughter of the first woman in this article. While waiting for the show to start, she was eating corn and then she spent quality time in the bounce house. Can you spot her in there? I also wanted to get the church in this photo and the green hills in the background.

The rebozo show is fun for people of all ages. The two children in the photo below had their faces painted but I never saw the area where it was being done. What is a celebration without children with painted faces? I love the expression on the little boy. He seems to be deep in thought about something.

There were many food stands set up and things to do while waiting for the show to start.  But the young woman, sitting on the step and waiting to be in the show, looked bored. Or maybe she was anxious about her performance. Or her feet might have been hurting. New shoes.

All of the models in the show had on beautiful costumes. Lots of competition between them to be the best.

Above is the table with the judges. They took the job seriously and spent a lot of time deciding the winners. From my point of view, they were ALL winners.

The girls in these two photos entertained us with several dances at the beginning and middle of the show. They did traditional Mexican dances. I think it was a corn planting dance in the above photo. Many hours of practice went into these dances and they were much appreciated by the audience.

The longer the girls danced, the higher they lifted their skirts. There was also a breeze coming up before the rain which helped to get those skirts flying. The girls looked like brightly colored birds fluttering around on the stage.

The two young women on stage in the above photo were previous winners.

The woman above was like a high fashion model on a Paris runway. Her woven rebozo had a long black fringe. Rebozos like hers take many hours to make. No wonder she seemed proud to show it off.

The rebozo above looked like the wings of an angel as the woman walked across the stage.

I liked the artificial flower hat this woman was wearing, almost as much as her rebozo.

The woman in the above photo was wearing a beautiful blue rebozo. She had it tied in front. The long fringe flowed like waves on the ocean.

The rebozo on the woman in the above photo was made with thin threads, possibly silk. The ends had intricately woven patterns on them.

The embroidery was on the woman’s dress in the above photo, not on her rebozo. But the rebozo had a complicated fringe. You can also see the embroidered flower on the rebozo of the woman standing behind her.

The woman in the above photo was the only expat in the show. I often see her around town and she is always dressed in beautiful clothes. Many of them are traditional Mexican dresses.

Several of the models tied their rebozos in different ways. I liked the one above. It makes her look like royalty.

As promised, the first woman in this article is displaying her rebozo on stage. The age groups seemed to be divided equally between the elders, middle aged and then young women and children. Women of all ages were represented.

Above are some of the younger women and children.

The woman on the left in the above photo was wearing a dress made out of squares of embroidered flowers. Her rebozo was also embroidered. I can’t imagine how many hours of work that outfit took to make. The girl on the right was wearing a traditional Mexican skirt and blouse. She wore her rebozo tied around her shoulders.

Access lake chapala helped sponsor this event and some of the money they donated went to pay for this singer to come in from Jocotopec. She had two guitarists accompany her. This was my favorite part of the show. She had a strong, beautiful singing voice, her name was Lola la Tequilera.

The dress worn by this singer had an airbrushed design on it. And of course, she had a rebozo. Bright red. It matched the intensity of her songs. A microphone might not have been needed for her voice.

It was dark by the end of the show. My small camera doesn’t work at night so I didn’t get photos of the last part of the show.  The women standing in the front were holding up certificates for winning various categories.  The official winner of this years Rebozo was Carmen Marques Parra pictured below.

It started raining and I quickly left. It was a memorable evening for me. I like to see events created for women, by women, that showcase their culture and beauty. Rebozos are part of the Mexican culture. Some rebozos are passed down from mother to daughter for many generations. This event was worth the wait. I loved it. I will be there next year if nothing stops me. Si Dios quiere.

One thought on “2018 Rebozo Fashion Show at the Ajijic Plaza”