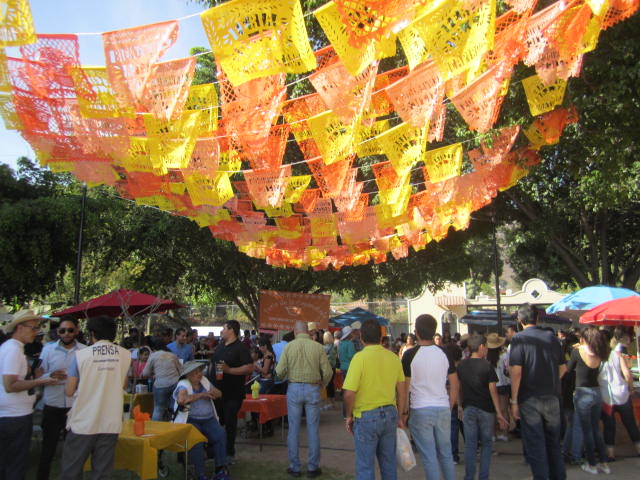 The Feria de la Capirotada, also called the Spring Festival, was held again this year at the malecon in Ajijic. Capirotada is only made during the Lenten season. Lent this year is February 14th through March 29th. But the Capirotada is especially popular and served in many places on Good Friday, March 30th.

There is no fee for this event. It is held in the afternoon through the evening under the shade in the park beside the Ajijic malecon. There were a lot of things happening, including many craft stands that were set up beside the park. There was a large crowd in every area of the event.

Besides the Capirotada tasting and contest, there were bands that played during the day and folk dancers performing. Also a jazz guitar musician played and I don’t know what else. Lots of fun. Dancing and eating and enjoying the beautiful day.

I didn’t have a chance to interview Lee this year. He was too busy trying to sell raffle tickets. I won a bottle of tequila last year so I bought a ticket but I lost on the last number to the man in the next photo. He was very pleased and then he helped Lee do the raffle. The tickets were 20 pesos each and they only sold 25 tickets for each bottle of tequila.

The man above was very pleased with his winning ticket and it was nice seeing him pitching in to help Lee with the rest of the raffle. This is a nonprofit event. Last year Lee had about half the amount of supporters as this year. I counted over thirty on the internet. So if they all donated something to raffle off, there would have been a lot of prizes.

I didn’t pay attention to the other prizes after not winning the tequila by one wrong number. I got discouraged and went on to other parts of the event.

Last year there were seventeen different stands giving out the Capirotada and hoping to win the event. This year, there were twenty seven. I couldn’t get around to all of them because it was so crowded. Capirotada is a bread pudding and that is my favorite dessert but after about ten samples, I couldn’t eat any more.

I liked seeing men participating. There were couples, single men and women and even families. They all showed so much pride as they gave out samples. Beautiful smiles. My favorite kinds of photos.

Every Capirotada was different. There is a basic recipe but creativity springs out of that. I put on my article last year about the meaning of the different ingredients and I will repeat it now.

This basic recipe has been used since 1640. So there have been thousands of cooks to change it around throughout all those years. All the recipes in this event were unique. Some were almost black. Others were white. You can see from these few photos how they varied. But they were all delicious.

Most of the capirotadas were made in the traditional pottery. Some of the bowls were extremely large.

The two photos above show the more traditional Capirotadas.

I really liked the white one in the above photo, especially the cherries and peaches. I think the white was cream.

The one in the above photo had lots of nuts and a delicious sauce that they poured over the top of it when they put it in the cups.

The one above was almost black and it was dryer than the others. It was also delicious. I wouldn’t have been able to choose a winner. From my perspective, they were all winners.

In the photo above, you can see the individual slices of the bolillo bread. They also added sliced bananas and sprinkles. Very colorful.

Besides the free samples of the puddings, there were two people giving out samples of booze. The young woman was giving out little cups of tequila, so I took one as compensation for not winning that bottle of it.

The man in the above photo was giving samples of a local liquor that is made with various natural ingredients. It might be made with strawberries, or nuts, or milk. It is very good.

I couldn’t resist taking the above photo of the young woman taking a selfie and her friend in the black shirt. Either she was taking her own selfie or taking one of the other woman taking hers. Check out the other young women in the background, watching. Maybe they were hoping to be in the selfies.

After I had my fill of samples, I walked along the malecon. I hadn’t been there for many weeks. I had forgotten how lovely it is there. The ice cream man was patiently waiting for customers. But he had too much competition with all those free samples.

Above is a photo of some children and dogs enjoying the cooling water. It was a very hot day. Smart.

In another part of the park there were several events. Above was a young woman walking a tightrope.

I don’t know what the young girls were going to do in the above photo. They were very shy but they all smiled and wanted to be in the photo.

I was finally too tired to stay any longer. I knew I would be missing a lot of great entertainment but I couldn’t go on any longer. Taxis are few and far between these days so I had to walk home. But it was worth being tired and hot. I will always have good memories of this day at the malecon and yet another Capirotada festival. Maybe one day I will try to make some for myself. But for now, I have had enough.

One thought on “The Feria de la Capirotada 2018 in Ajijic”