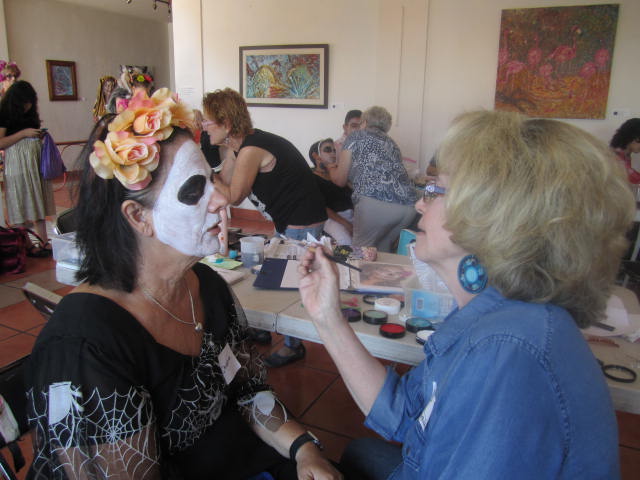 The Day of the Dead season often starts out with the Thrill the World Dance. It was held this year on Saturday the 28th of October at four p.m. In the Ajijic Plaza. Anyone can become part of the dance. All you have to do is watch for the signs that show up a few weeks before the dance of the registration, times and days of the rehearsals. 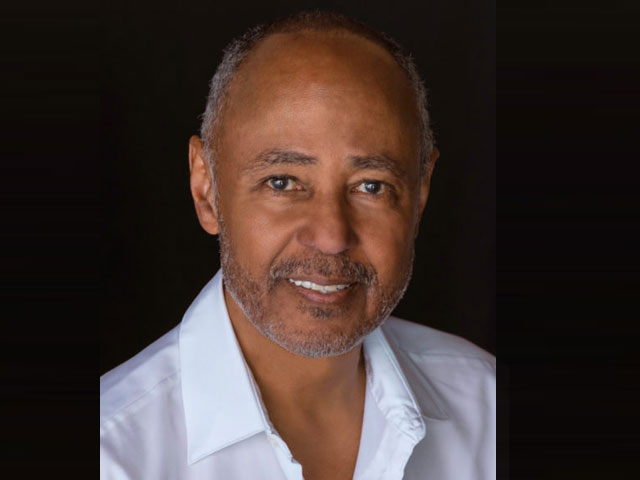 You may be wondering why this handsome face of Cortlandt Jones is in the article. This year we were lucky to have him be in charge of organizing the dance, teaching the dancers all the moves, directing it and dancing in it. He is an expert on the Thriller Dance. He performed it in the original Michael Jackson video.

I caught him just as he was getting ready to start the dance. He looks quite different from his first photo. Besides dancing in Thriller, he was a professional dancer in many Television, Stage, Cabaret and Music Videos. Then he was drafted into the Air Force for four years. When he got out, he went to the N. Carolina School for the arts and has a BFA from them. Ajijic is very fortunate this year to have him in charge of the event.

Cortlandt Jones is behind Michael Jackson, on the right.

Cortandt said that the video of Thriller was rehearsed for a month and a half, five days a week. Then one night, all night, it was preformed and recorded in the industrial area of L. A. Michael Jackson wanted a scary environment and time. He got that for sure. The video had 12 core dancers and was recorded in 1982. The make up took three to four hours for each person.

I am not sure if these two women in the photo above and below were part of the dance or not. But they were the first zombies I ran into when I arrived at the plaza.

Cortlandt gave to his dancers the same list of questions that Michael Jackson asked his dancers: question number 1. Who are you? 2. Why are you here? 3. Where did you come from?

These three questions must be answered by the zombie dancers along with learning the steps to the dance.  I have been trying to figure out those questions all my life so I guess I wouldn’t make a good zombie dancer. I still haven’t answered them.

The Thrill the World dance has two functions. One is to try to break the world record of the number of dancers in one place and the other is to collect money for charities. This dance now goes on all over the world, coordinated to start at the same time, four p.m. And each dance is for it’s own charity.

The first Dance was started by Inez Markeljevic in 2006. She titled it Thrill Toronto. It was in Toronto and it won the world record of the most Thriller dancers in one place, 62 zombies.

Her original purpose was also to unite the world through dance. Over three million people worldwide now dance in it each year. And every year it grows. There is a list of countries that participate on their site. Thrill The World.com

You will find a lot of interesting information on that site if you want to know more about this event. People who want to participate the next year register on the site. And of course they hope to break the world record.

The photo above and the next four below are of the makeup sessions just before the dance. It is fun to watch the transformations. Also many people come already made up . Lots of scary zombies are around the plaza on the afternoon of the zombie dance.

This takes place on the second floor of the cultural center in the Ajijic Plaza.

Just think of all the people all around the world who are doing the same thing at the same time, becoming zombies. I read on the Thriller site that 80 countries participated in it recently.

Even though the woman in the above photo has all that zombie makeup on, her beauty still shines through.

Another beautiful woman becoming a zombie. It is impossible to hide natural beauty.

Cortland did a great job of directing the dancers. I hope he will do it next year.

The above photo is towards the end of the dance. The zombies have really gotten into character.

The above photo is after the dance was over and they started a line dance.

They  put on a fast moving line dance song and invited anyone watching to join in on the fun to come up and dance. Not many of the audience members did that. It was kind of daunting after their impressive thriller dance.

I think the women at the window were the make up artists.

Every year the zombie dance here is held for a different organization or organizations. I remember one year it was for the Red Cross. The woman in the above photo was collecting for this year’s organization.

It was for the Tepehua Center, school for special children. A couple of years ago they figured out a way to make more money from this event by setting out VIP chairs, just for people who donated 500 pesos. Boy did those chairs look inviting while I was crunched up in the hot crowd.

The above man dressed like Santa has been there every year I have gone. I noticed that he shed his full costume. It was a hot day. Maybe next year he will come in short shorts. Or how about Santa wearing a bathing suit?

When the dance is over, the zombies jump into trucks and strange cars like the one above and go to six corners to perform it again. Then they return to the Ajijic Plaza for rest and relaxation. A barbecue with mixed drinks is prepared in the plaza . The barbecue is 300 pesos. All this is for charity.

Children in the plaza had a display out of many beautiful rocks they had painted and were selling. This young man proudly showed me his but unfortunately I didn’t feel like carrying a rock around the rest of the day. So all I did was take his photo with it.

Above is a photo of just a small part of the crowd.

These handmade wreaths are selling all over town now, for people to put on the graves of their loved ones. I put these on here as a tribute to Michael Jackson. No matter what else he did in his life, or how you feel about him, he is partly responsible for the movement of the Thriller Dance that every year brings in thousands of dollars for nonprofit organizations all around the world.

And also you are welcome to dedicate any of  these beautiful wreaths to your loved ones who have already passed on.  I have chosen the red and gold one for my mother.

In Mexico, I have learned to not be so afraid of death and to be able to honor people I love who are not here anymore. The Mexicans have a wonderful view of death, eating and singing at their graves as if the people they love are still with them.  And with the Thriller Dances, the spirit of Michael Jackson lives on too.