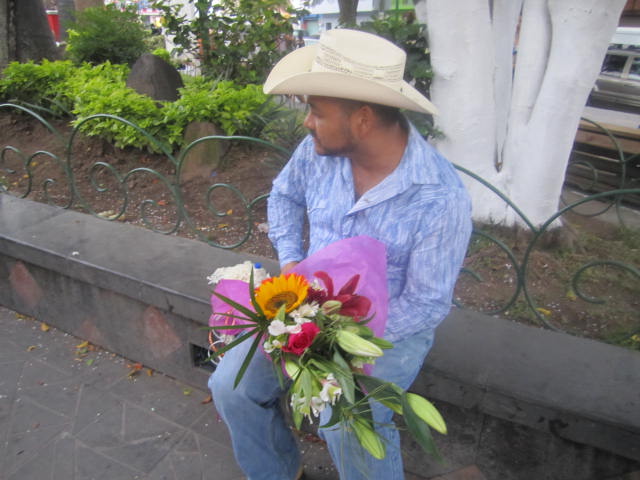 The Rebozo (Shawl) parade was the last of the Independence Day Celebrations. The Globos are at the beginning of the holiday, on the Saturday before the 16th of September Independence Day Parade. And the Bebozo Parade is always after the big parade. It is on the 17 of September. In between these two celebrations there are several others. Plus, many of the restaurants create their own celebrations and parties are going on constantly. Not just in restaurants but in private homes, on the street, in the plazas, etc. It is a very lively and noisy time of the year here.  Not to mention all the fireworks, both large and spectacular and just loud. All of these celebrations started towards the end of the rainy season. We have had many months of quiet in town. I need to use the words relatively quiet days because it is never completely quiet here. If you want complete quiet, don’t come to Mexico.

The man in the above photo was waiting for the rebozo parade to start. He may have been going to give one of the winners of the best rebozo this bouquet. That was the prize. But maybe he was just waiting for his sweetheart and the flowers were for her. I liked to see him sitting there waiting patiently with a lap filled with beautiful flowers, no matter what the reason.

The photo above and most of these others were taken while the participants were waiting in line for the parade to start. I give a lot of credit to these children young girls and grown women. This line lasted for too long. Everyone was getting impatient, especially the youngest children.

If you don’t believe me about their impatience, check out the expression on the face of the little girl above. She had come to the end of her waiting rope…… For awhile she was chewing on her necklace and then her hands. It was too much standing around for her.

Above is yet another photo of the people in the line. The youngest children were at the front and the oldest women were at the end. It was very different from the Rebozo Parade I had witnessed the previous year. Then there were many more women and much more elaborate Rebozos. Fewer children.

It was such a pleasure to watch these older women displaying their rebozo treasures that may have been past down from one generation to another. This parade was not so focused on the Rebozos but more on the overall presentation of  the girls and women and their dresses. Most of the Rebozos were very simple.

The little girl in the above photo, seen holding someone’s hand, was coming to the end of her patience. Check out the mischievous look on her face. She finally escaped that boring line and came over to where I was taking pictures. She bent down and handed me a tiny plastic flower. Look at the photo after the next one.

Above is another bored expression. Such a beautiful little girl. Such a sad expression. I knew how she was feeling. This waiting was going on for too long.

Here she is, giving me that plastic flower. As if it were made of gold. I am glad she was able to get out of that line for a little while. I hope next year will be more organized both for the patience of the people in the parade and for the crowd waiting for it to finally start.

The older girls came after the small children. They didn’t look very happy either. I have always loved the Rebozo Parade but I too was wishing I hadn’t gone. At least I should have waited until an hour after it was supposed to have started.

I remember one year standing around for a long time at the church waiting and waiting for the priest to come out and bless the horses. I didn’t do that again. So this year I missed that celebration and the horse parade that came after the blessings.

As I wrote earlier in this article, there were very few older women in this Rebozo Parade. I missed them. But these two women were doing a great job of holding their own for us older women.

I have two photos of this woman . There is another one of her in the parade itself, showing off her beautiful Rebozo. It is the fifth one down from this one. She is a beautiful woman. Of course all women are beautiful in their own ways. I don’t know how they could choose just three winners.

The winners were based on the three age groups from the youngest to the oldest. And each winner was given a bouquet of flowers. Maybe even from the man in the first photo. I couldn’t see much at that point of the evening. Too many people were in front of me.

Above is a photo of some of the young women on the gazebo stage. What they did was have people clap for the ones they liked. And the winner was the person who received the loudest claps. That hardly seemed fair to me because just a few friends of a contestant can make a LOT of noise. I liked it better when it wasn’t a competition for the prettiest and most popular girls but as a way to show off the beautiful Rebozos. But I am a traditionalist. I need to flow with the times.

The women in the above photo were further back in the line. Some of them were enjoying themselves but others were not. Patience is a virtue, I was always told. So many of us were short on virtue by that time of the evening.

Finally, something exciting was happening in that line. Check out the little boy giving that little girl in the front a big hug. I might call that one of the highlights of the evening.

Above is the photo of the woman five photos earlier. But now she is walking in the parade and displaying her beautiful Rebozo.

Above is another photo of the women on the stage. The woman in the front was displaying her Rebozo. It was a beauty and she was even more of a beauty.

The woman in the above photo was one of the winners. I know that because in the second photo down, she is receiving a bouquet of flowers.

Above are two women on the stage. The woman on the left is the same one as in the photo below and the two photos above, but she is much thinner in the above photos. She was one of the winners because she was holding the bouquet of flowers. I wish they all had won flowers. Because they all were beautiful.

Some of these photos were provided for me by a different photographer. My camera doesn’t take good photos after dark so many of these pictures are his. It was a cell phone camera. I had thought about one day buying a cell phone just so I could take photos at night but I see that those don’t always work perfectly either.

The winner of one of the categories is in the above photo with her bouquet of flowers and both she and the announcer look at least thirty pounds heavier than they look in real life. I flipped back to the man at the beginning who was sitting down with the flowers and I think it is the same man as in the above photo. Only he is much heavier in this photo. Barely recognizable. All camera have flaws, even cell phones.

I did not get any of the names of the winners or any other participants. There was too much activity and confusion. So I just hope that you will enjoy these women without thinking that there were winners and losers.

Above is just a small part of the parade around the gazebo.

After the parade, the Mariachis arrived. By then it was very late and dark. Photos were impossible for me to take with my camera and frankly, even though I loved seeing everything, I was tired and wanted to go home and rest.

As I was walking away, I managed to get one photo of the Mariachi band playing on the gazebo stage. And Mariachis are my favorite kind of Mexican Music. I just had to leave so I could rest.

I did not get the names of these parade officials. I think the woman on the left is the queen this year of the Independence Day Parade. And the man in the middle is an organizer of the events. The woman on the right is the Queen’s next in line or helper.

It was a wonderful event but I was glad to finally be going home. There had been so much happening during the previous week that I was glad to get some off time again.  I will go to as many events as I have the energy for next year too. I might even try the blessing of the horses and the horse parade again. It is a very exciting time during the Independence Day celebrations.

2 thoughts on “Rebozo Parade in the Ajijic Plaza 2017”