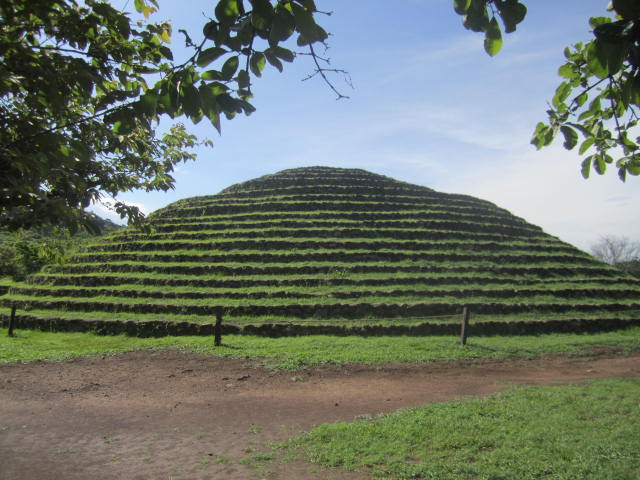 The photo below is of the main pyramid in the Guachimontones site. This site is located in the town of Teuchitlan. It makes a nice day trip from Ajijic, approximately two hours with stops along the way. I went with a friend on Charter Tours. I have nothing but good things to say about them. I will put more information about them at the end of this article. But they take tours to the site once a week on Thursdays. They have been running trips to this site since the beginning of their tour company in 1993. So they have a wealth of knowledge about the area.

I am going to backtrack now to the trip along the way because we did one of my favorite things, which is to visit a farm for a Pajarete. Pajarete means little bird but it also is the name of a morning gathering where the cows are milked. If you want to know more about a Pajarete, I have written an article about it on this site.

Rosie Zepeda,  our tour guide is having a conversation with the owners of the farm.

The man in the above photo is topping off my drink. First to go in the drink is a teaspoon of sugar, or more if you like, then chocolate, then instant coffee, then a shot of alcohol and lastly, the fresh cow’s milk. It is delicious.

Before we could visit the pyramids, Rosie had to sign us in and the man who works there was very friendly. Only locals are hired to work at the site. The site was discovered in the 1960s but of course the locals knew of it all along. A road up to it wasn’t built until the year 2000 although people hiked up the trail, often in mud to reach it before then. Rosie was one of those hikers.

The pyramids were built in the preclassic period, a thousand years before Christ. The society collapsed in the 900s A.D. but no one knows why. Their economy was based on Obsidian which they made into tools. When metal was used for tools, their obsidian tools were no longer wanted. This may be part of the reason of the collapse of their society. Above is a ballcourt. There are two ballcourts on the site. They played a form of ball where the players could only hit the ball with their hips. And they used the ball game as a way to judge problems between people. They believed that the winners of the game were in the right in disputes because God allowed them to win. But things were bad for the losers. Heads were cut off and boiled and their brains were eaten. Harsh punishment.

There are many plaques in the site written in both Spanish and English, about the history of the site. They are very helpful.

I love this photo because it shows Rosie giving her lecture with so much heart. She was a wonderful tour guide. She had many stories to tell about the pyramids and the people during that time and also of her many trips there throughout the years.

The site was discovered by an archaeologist Phil Weagan. He found some obsidian down a stream and then asked the locals about it, which took him to the site. He spent the rest of his life working there and learning all about the people and their beliefs.

Rosie bent down along one trail and picked up this piece of obsidian. She said it was part of a knife that was made all those years ago. She has an expert eye for treasures. She gave it to one of the people on the tour. Lucky guy!

Here, Rosie is pointing out on the map where we are located. During the time of the Teuchitlan society there were from from ten thousand to twenty thousand people living around that area.

This is a view of the town of Teuchitlan from the pyramid site. You can see Lago de Magdalena. At one time this lake was larger than Lake Chapala. People lived all along it and grew vegetables and fruits.

Rosie gave us a choice. To walk down the hill back to the museum or she would call the ride to pick us up. Everyone decided to walk. It was a beautiful day, sunny and a nice breeze.

It was a beautiful and modern museum. We were shown a film about the site and the people who once lived there. I was impressed with the murals on the walls.

I took the above photo in the movie theater. I wanted to show the way they believe the pyramids looked when people lived there. You can see what they think the houses looked like.

Every month the museum makes a new display in one area. This month it was about local pottery and how it is made.

Above is a ballgame. Check out the statues at the bottom right hand corner. They believed that the more deformed a person was, the higher up in social class they were. So families intermarried to create these deformities. They also molded their heads to become longer and almost into a point.

Above is a pottery depiction of one of their circle dances.

Can you see the pottery piece on the middle right side of the above photo? That is of a king. He has very short stumps for legs and no arms, just flaps of hands.

Above is a photo of a small scale model of the pyramids and the surrounding areas. You can see the little houses that surround the pyramids. It covers a large area.

Above is a photo of the back side of the museum. It looks like they have special events there because I saw a kitchen. It is a beautiful landscape and museum.

We were all tired from the walking and lectures so Rosie and her driver took us to lunch along the lake at a nice restaurant. The food was delicious and the view was very much like the views at Lake Chapala.

Our Driver, Don Jesus, was an excellent driver. I felt very safe with him. He has been driving to the pyramids with Rosie for many years. He helped us get in and out of the van many times during the trip.

I highly recommend this trip. It is an easy day trip and filled with information. If you are interested in contacting Charter Tours about any of their trips, go to www.charterclubtours.com.mx

7 thoughts on “Day Trip from Ajijic to the Teuchitlan Pyramids”