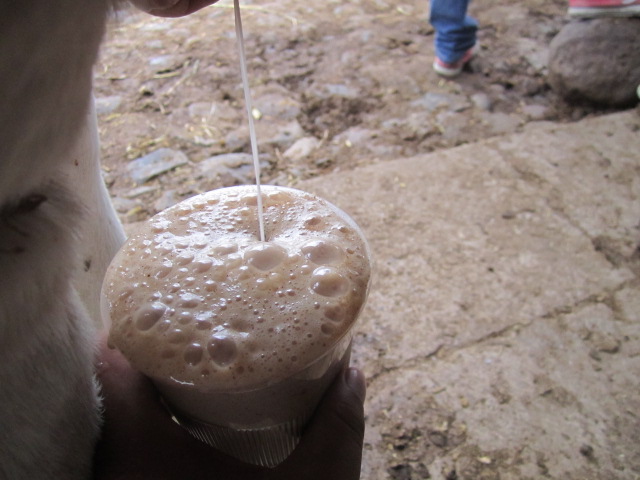 El Pajarete is a party, in a barn early in the mornings when the cows are being milked. It is also the name of the drink that they make out of fresh cow’s milk, liquor, chocolate, sugar and instant coffee. My friend took me to one on a Sunday which is the biggest day for them although people drop in every morning at milking time.

Above is the cow fountain which is filling up the cup.  The drink is also sometimes called Pajaro (bird in Spanish) and even Pollo (which is chicken in Spanish). Why bird? Why chicken? The best explanation I heard was that Pajarete can mean early bird. So bird is the theme here.  There were chickens in the barn. But the milk came from the cows, not the chickens and there are no eggs in this drink either.

Notice that the cow’s back legs are tied so she can’t kick. There were lots of other animals in the barn too. A few of the cats are in the above photo, and a goat in the background. Lots of chickens were running around and of course dogs. Add cowboys and cowgirls to this mix and you have a party.

The woman shaving the chocolate is the wife of the owner and I am sorry to say that I did not get their names. I was  distracted by all the commotion going on and also the drink itself. It is very relaxing, 180 proof alcohol in it.

The alcohol is from sugar cane. It is sold in big containers for little money.  I read that these drinks are cures for hangovers. Maybe that is the reason for Sundays being the most popular days of the week. Saturday night over indulgence.

One farmer was sitting near me and telling me about the woes of the dairymen. These drinks are sold for about a dollar a glass. I don’t know how he makes money after buying the liquor, chocolate, sugar and instant coffee but he does. He makes more than when he sells his milk to the milk companies who sell retail. He only gets a few pesos per liter. That is not enough to keep his dairy running so many of the dairies are going out of business. He said that one reason milk is so cheap is because the United States is selling massive amounts of powdered milk to Mexico and the Mexicans buy that instead of fresh milk because it is cheaper. I buy a lot of fresh milk and I can say that it is cheap here, cheaper than same amount of soft drinks.  And it is very good. It is sad to hear about the dairyman’s plight.

The liquor kills off the germs in the fresh milk. I have been there twice and both times had two, okay I admit it, three glasses of the pajarete and I have never felt any bad after affects. What could taste better than fresh warm milk, coffee, chocolate, sugar and liquor?  The perfect comfort drink.

Here the man is adding the milk to the drink. Milk is always added last. One man went a step further and set his drink on fire before adding the milk. Pajarete Flambe.

This one day old calf was checking us out from behind a fence. We were drinking his mother’s milk and she wanted some. They never allow the calves to nurse directly from the mother because they sell the milk. So she got hers through a bottle.

The calf was finally happy. Nothing like her mother’s milk to sooth her hungry stomach. She looks awfully skinny but she has only been out in the world one day. She will fatten up. I hope.

The cowboy in the above photo is the owner of the farm. I didn’t get a front view or his name. Just too much happening at once. But I wanted to show his beautiful belt which my friend said was very valuable. It is made out of gold and silver.

This kitten was interested in the chicken but she was playing it cool. I asked about how they keep the cat population down.  I was told that the cows do a good job of that by stepping on one from time to time. Out of a batch of five kittens this was the only one left. Smart kitten to stay away from the cows. In this world you either learn fast or die young.

We arrived early when the cows were just starting to be milked but in an hour or so the place was packed with cowboys and a few cowgirls too. I pretended to be a cowgirl for the morning.

The cats finally got their milk. Everyone gets milk, dogs, cats, people and even the chickens. Check out the kitten on top of one of the grown cats. That kitten really loves milk. The calico cat is patiently waiting for a free space. She must be an older cat and has learned that the milk never runs dry in the mornings.

People were all very patient and friendly. Whenever anyone came in, he or she walked around shaking hands with everyone there and did the same thing when leaving. There was a lot of talking and laughing.

Above is a group of the younger men enjoying their drinks. This isn’t the Ritz. I had to use the bathroom after my second glass and I was taken to another room behind this main room. It was filled with chicken droppings and hay. The man stood guard outside the open door so no one would come in while I squatted and did my business. But I wasn’t complaining. I was having too much fun for complaining.

Above is the beginning of the crowd that eventually filled up the outside area. Women, check out the handsome cowboy in a black  t-shirt and white cowboy hat in the far right of this photo. There were a lot of handsome cowboys wandering around. Finally a place where there were more men than women. In most social gatherings where I go the odds are about twenty women to one man. It was the opposite at the pajarete.

I loved watching the people laughing and talking. This woman’s name is Marie Fernandez Santana. She is a federal attorney. I didn’t get the man’s name. Next time. I hope there is a next time for me to go there.

I love the photo above. The man is catching the cow’s pee. He kept the barn area very clean. He is holding one cow’s back legs and catching pee from another. Busy man. Kittens, watch those cows feet.

All smiles as people were leaving. Time to get on with the day. I think these cowboys were on their way to a Rodeo.

This farmer has a fun ride. His name is George Gaudet. He owns a nearby farm. He sat by me for awhile and gave me lots of information about dairy farming. His wife sells things at the Monday market in Ajijic. They have been living here for many years. Transplanted Canadians.

If you look at the end of the road you will see a public bus that has stopped for some people. The farm was about a twenty minute drive by car outside of Ajijic but if you are adventurous you might be able to take a bus out that way. I am not that adventurous. These pajaretes go on all over Mexico in the early mornings. What a treat for me. I hope I will be invited back again. (I know, I said that once already but I mean it.) I also hope that the dairy farms can survive this price cut in the milk or there will be no more pajarete parties and no more fresh milk.  Boycott powdered milk.