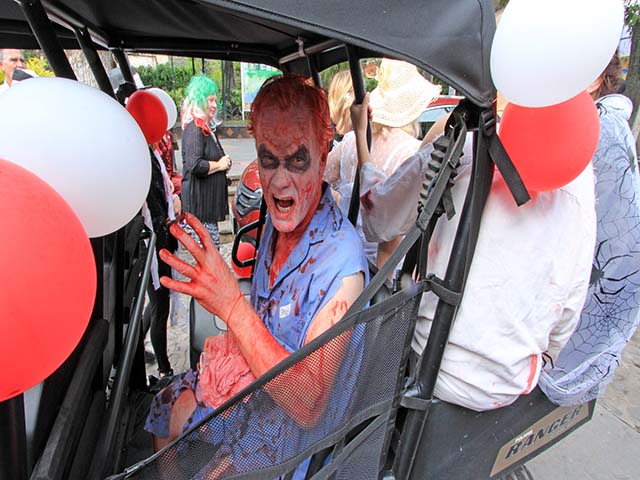 The Ajijic Zombie thriller dance was held at the Ajijic Cultural Center on October 24th at five p.m. on the dot. It always starts at exactly the same time all over the world.  No matter what you might think of Michael Jackson, he was the inspiration for this world wide event. Unfortunately, I wasn’t able to attend this year so my friend sent me these photos to put in the article. Wonderful and scary photos. I greatly appreciate seeing them and being able to use them for the article. Too good to miss. Thank you friend.

The first Zombie Thriller Dance was created in 2006. I will be giving you a few facts about the events but they are easy to research online. They have a site with all kinds of useful information and if you want, you can even sign up through them. The site is: www.thrilltheworld.com.

This is the third year of articles about the Zombie Dance so you can go to the first two articles and also see more information about them. I only received one photo of the dance itself. It is further down in this article. The dance is always the same.  It is danced to Michael Jackson’s Thriller…..

People sign up weeks in advance and spend sessions practicing the dance, which always starts out with everyone looking dead on the floor and then they slowly wake up and start dancing. And at the end, often they will allow the audience to participate. That is lots of fun, dancing with the zombies. Children particularly enjoy doing that, jumping around like popcorn popping in a frying pan. 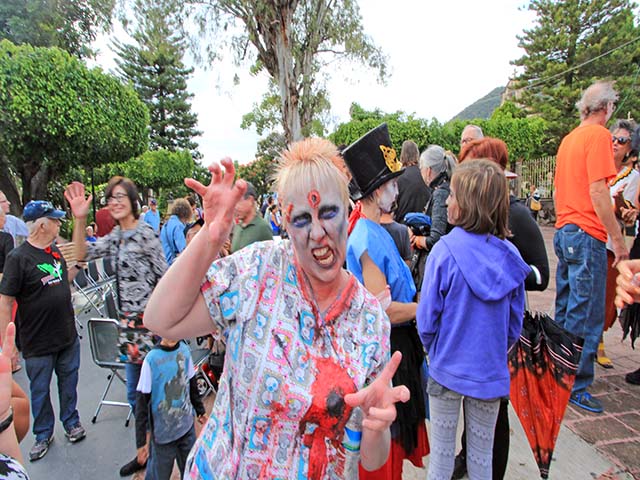 On October 27th, 2007, the zombie dances were done in 52 countries. 1,722 people danced in it and it got two world records for the largest simultanious  dance in the world. if you like, you can see many of these dances on you tube. 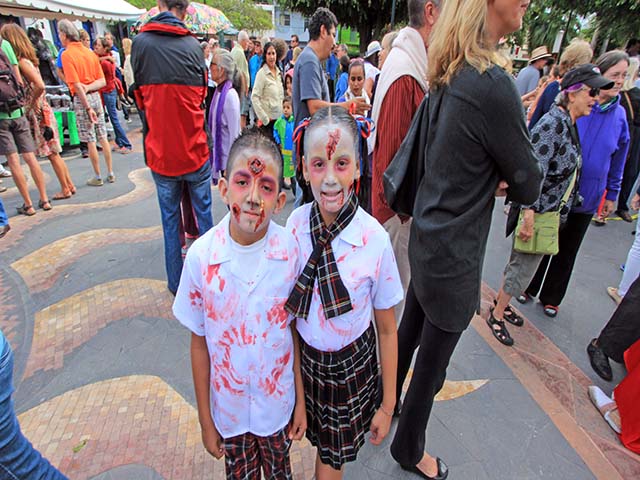 I love this photo of the children in their school uniforms dressed like zombies. Everyone is welcome to enjoy the dance and all the other festivities. As you can see from these photos, the Ajijic Plaza was packed. There is no charge but sometimes people will ask for donations. Every zombie dance in the world is done to collect money for local charities. The one in Ajijic is for the Red Cross. They need all the help they can get so they can keep their ambulances going and their health centers open. An ambulance ride to the hospital could make the difference between life and death to someone. 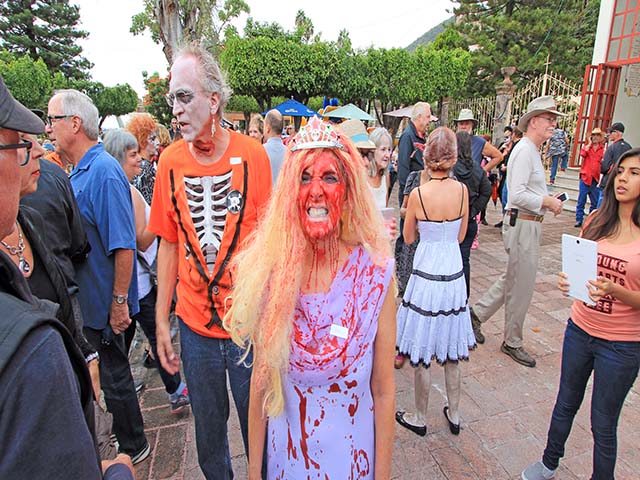 It looks like the woman in the above photo took a blood bath. Before the dance itself they always have places set up where people will happily apply make up on the dancers. This make up person seems to have gotten carried away. Or maybe she did this to herself. 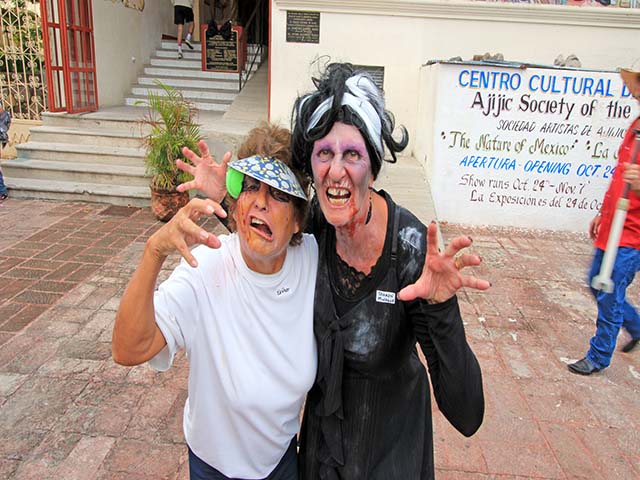 In 2013 the biggest dances were held in Redmond, Washington, with 256 dancers. Istanbul, Turkey with 221 dancers and Eugene Oregon with 213 dancers. 66,451 people participated world wide in 134 events in 22 countries, 6 continents. 68,000 dollars in funds were raised plus food, clothing and donations. The statistics aren’t out yet on the site for this year. 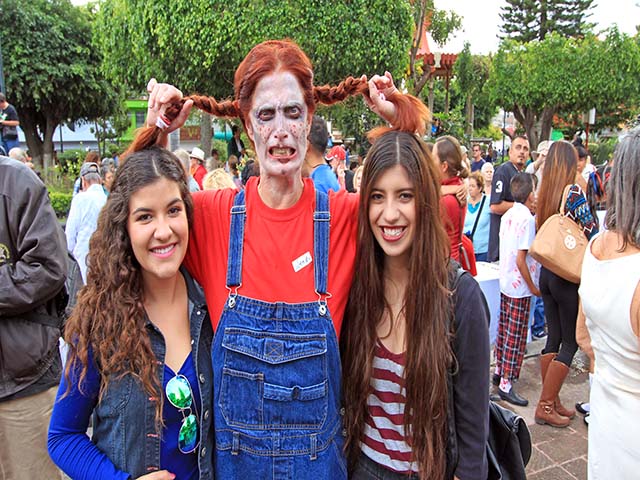 What a fun way to raise money for charity. I don’t know how many dancers there were this year in the Ajijic Plaza but if you scroll down three photos you will see it and try judging for yourself. Good luck. It is very crowded with dancing zombies. 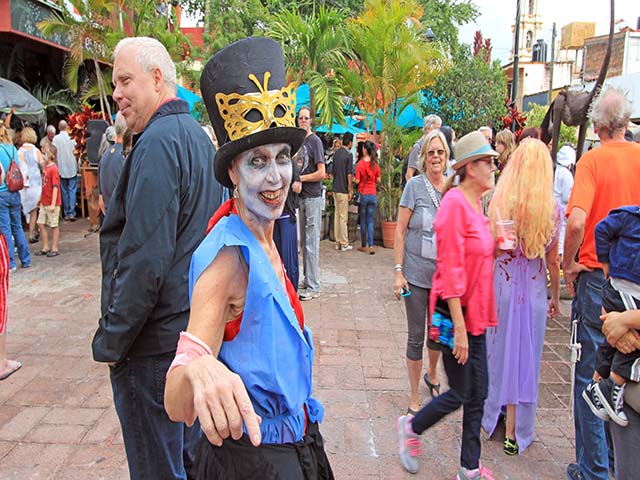 The woman in the above photo seems to be trying to entice my friend, the photographer, into following her. Don’t know if that is a good idea or not. I see red on her mouth. I think it would be a bad idea to go anywhere with a zombie. 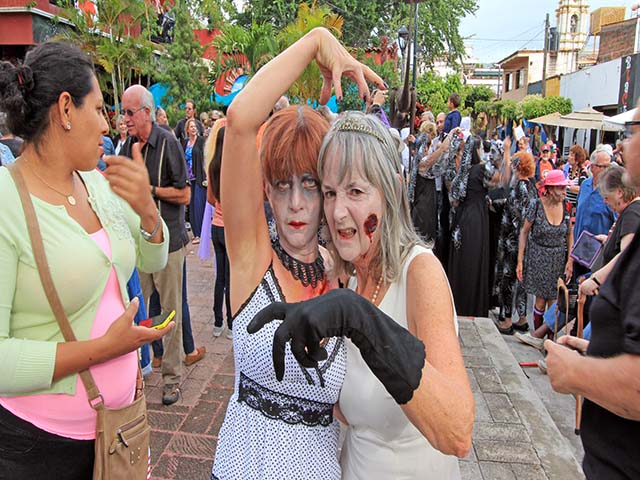 The Zombie Dance happened just before the Day of the Dead weekend celebrations. So much was happening in town that everywhere you turned you might run into a parade, dancing, live music. Lots of booths were set up for selling delicious food and craft items. This holiday is probably the biggest one of the year in Mexico. 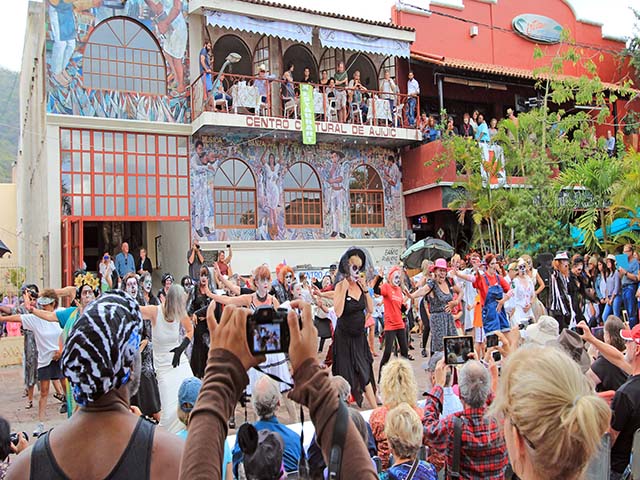 Above is the photo of the dance itself. Check out the woman wearing all white and a long black glove in the left side of the photo. Everyone, of course, was snapping photos. I always love the beginning of the dance with Michael Jackson singing and the great beat of the music. Makes me want to jump into the dance too but you can’t just do that. Okay at the end of the dance but this is a well rehearsed routine and you have to commit to going to some rehearsals before you can join in the fun. The above photo looks like it was towards the beginning of the dance, after everyone got up from their long sleep on the ground. 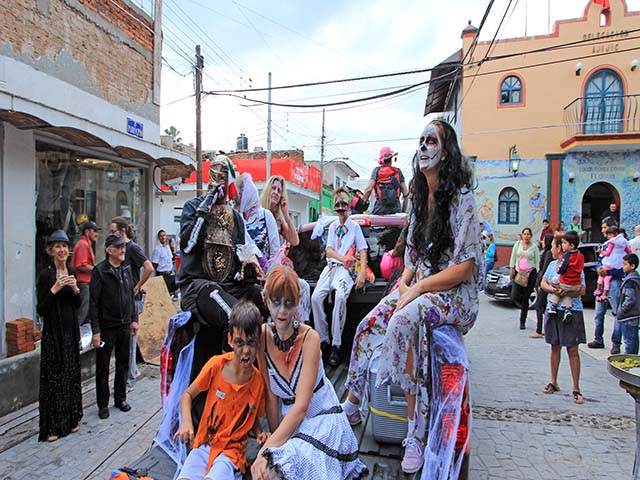 Above is a photo of people getting ready to parade in their costumes through part of the town. Many people were crowded into small automobiles, trucks and sometimes even riding on donkeys. I would hate to be walking down the street and be surprised by this parade, not knowing it was coming. 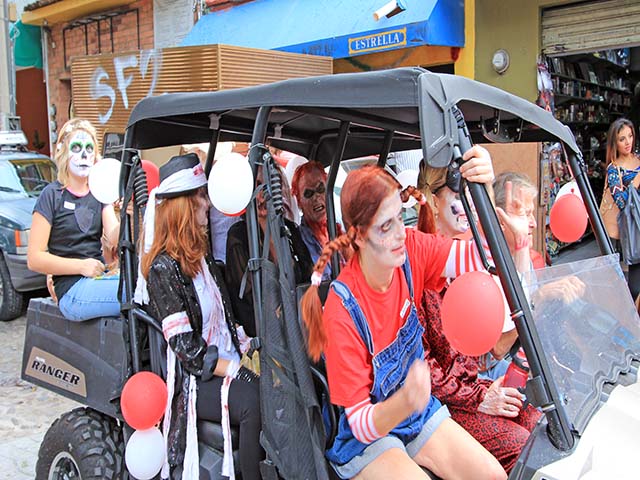 How would you like to have this group of young women stop to help you along the side of the road? 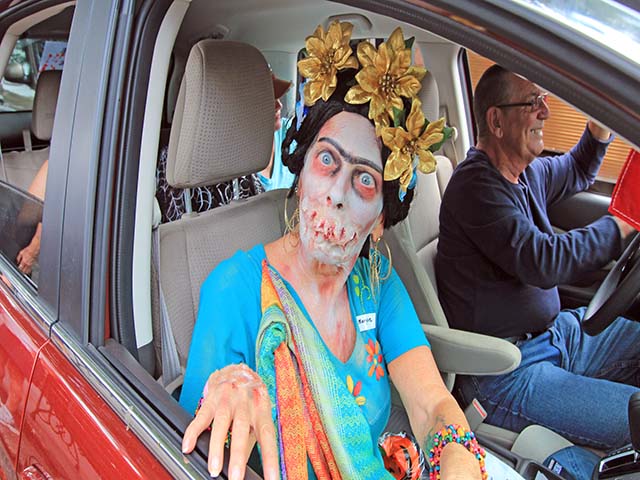 I believe the woman in the above photo was dressed like a dead Frieda Kahlo. How about that mouth? The man driving the car seems to be enjoying his time with her. I bet she won’t be getting any kisses….. 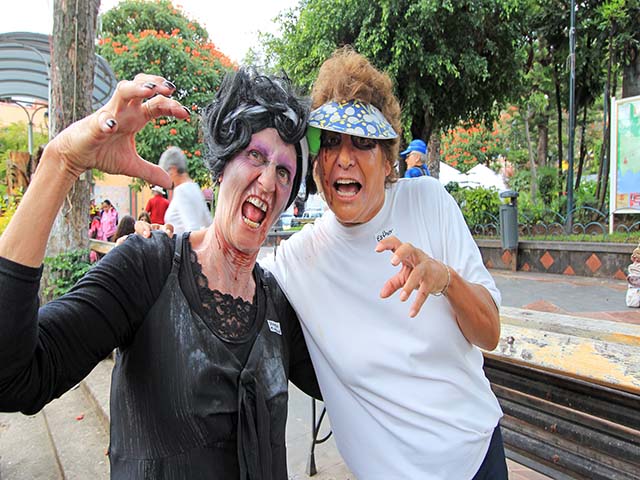 What the two women in the above photo lost out with little make up and costumes, they more than compensated with attitude. 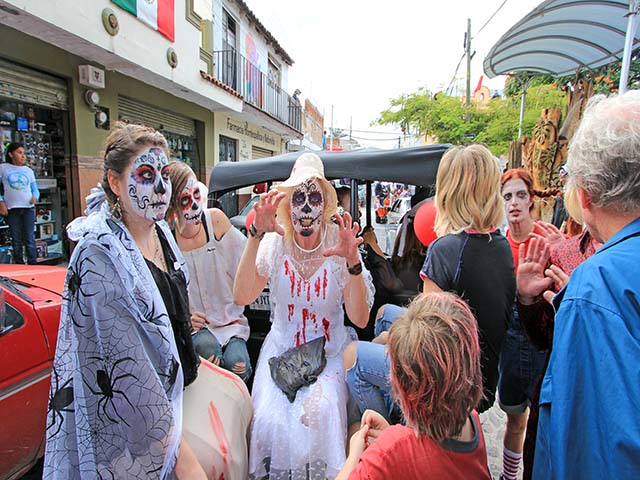 The scary Zombie above was headed to the “Six Corners” street in Ajijic for the second dance.