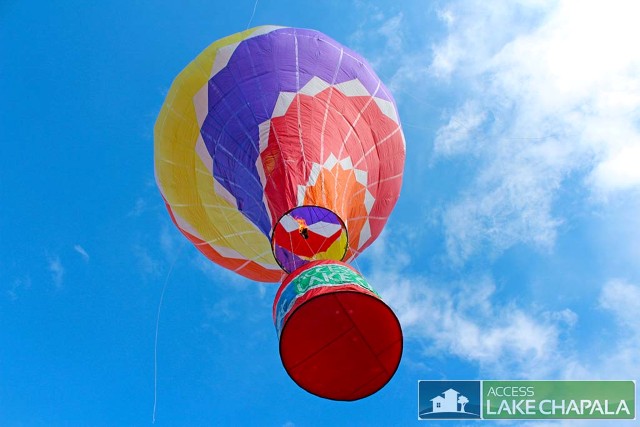 The 2015 Globos Event was a huge success.  It is one of my favorite events. I put two photos of our own globo at the beginning of this article because we at Access Lake Chapala are proud to participate in it and also proud that our globo was a lift off.

Both last year’s globo and this year’s globo made it into the air. That is a minor miracle as larger ones often do not make it. 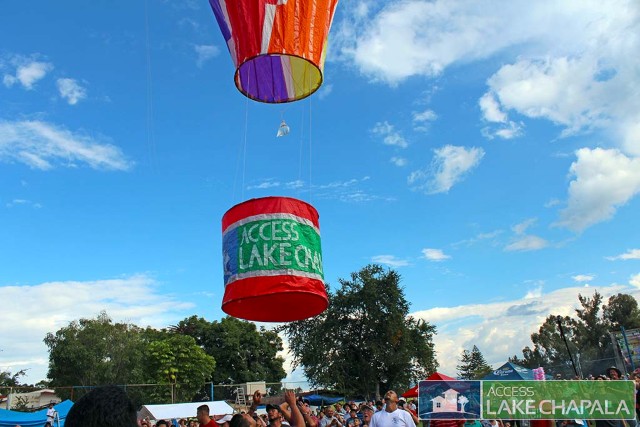 If you like to eat, then the Balloons event is for you. There were food stands out on the street before the entrance and more food stands inside. Seems like eating was half the fun of going there.

The drinks in the above photo are typical Mexican drinks. The white one is Horchata which is made out of rice milk, vanilla and cinnamon. The one in the middle is made from Hibiscus flowers. And the one on the on the right may be strawberry. I am not sure. All I know is that they are all delicious.

Hot dogs are popular in Mexico. They are made many different ways. How do you like the fancy ones on a stick that have been cut into swirls?

I wonder who this pretty young woman is waiting for at the entrance. This event is one of the biggest social gatherings of the year, for the Mexicans and the Expats. For one thing, it is free unless you are feeling generous and drop some pesos into the collection box located behind where she is standing. And for another, it is a lot of fun.

Check out all the smiles in the above photo. Okay, there are a few frowns. But they are the exception rather than the rule. Maybe the two kids on the bottom left side of the photo didn’t get their naps. Maybe the blond woman in the front didn’t get hers either.

As I wrote about this being a social event, check out the young girls with their arms around each other. Great memories for when they too will be old.

The photos above and below are of one of the first ones to go up. It was a success.

It was a beautiful sunny day with a few clouds. Last year it rained. I am glad the weather cooperated this year.

It was a perfect day for taking photos and many of the spectators had cameras. Some of them even had telephoto lenses, like the one in the photo below. Lucky woman.

This year the umbrellas were brought out not for the rain but for the sunshine. What a treat not to have to worry about rain.

This team is almost done with the preparations to send up a globo. Each team wears shirts the same color.

It doesn’t matter how old you are, the globos are for all ages. I love seeing people smiling as they are walking around, taking photos or meeting up with friends, or just watching the globos fill up and float away. I like the smile on the man in the above photo on the bottom left side.

For some reason I startled the ice cream man when I took his photo. With all the activity going on around him, my little camera didn’t seem scary to me. But he had a different point of view.

I always like to see the expressions on the faces of the children as they watch the globos go up.

The two men in the above were the equivilant of sidewalk helpers at construction sites.

Often, the globos never make it off the ground. They catch fire as they are filling up. And sometimes they make it up but quickly catch fire and come down again. People on the ground have to watch their heads as falling ash isn’t too pleasant.

The little boy in the above photo was taking the burning up Globo far too seriously. It is all part of the game.

So ends another globos festival, for me. Not for most everyone else. It went on until after dark. But I hurt my knee and couldn’t stand very long. I enjoyed it anyway. If you are ever here during this event, you won’t be disappointed by it.