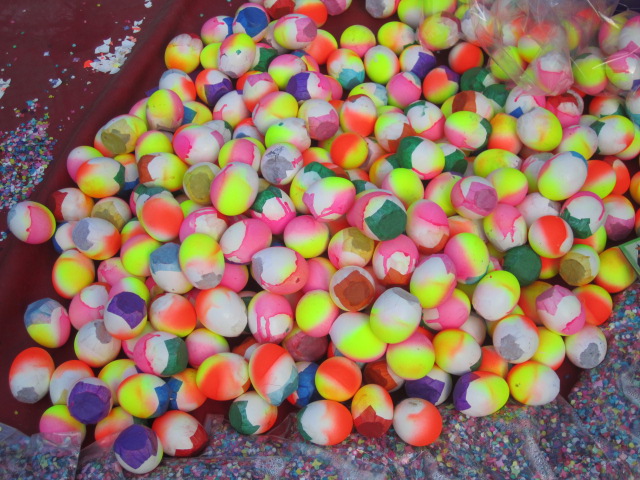 Easter came early this year. The holidays started with the Globos celebration which is just before Ash Wednesday, through March 29th Palm Sunday, April 2nd Maundy (Holy) Thursday April 3rd Good Friday and finally April 5th which was Easter Sunday. But the Easter holiday continues for at least one more week. All beach towns and tourist towns in Mexico are packed to the gills during this time of the year. Since Ajijic is a tourist town, we were also very crowded. It is always a lot of fun with all the new people in town.

The restaurants are crowded. The malecon is crowded. The plaza is crowded and there are many different celebrations happening almost on a daily basis. Above is a photo of the Easter eggs that are sold in the plaza. Someone has taken the time to cut open the top and fill each one with confetti. Then the children throw the eggs at each other, dogs, and anything else that moves nearby. Keep your eyes open. You too may end up as a target.

The weather was beautiful all during the Easter celebrations. I took a long walk on the Ajijic malecon. I had never before seen it so crowded. People were out on the lake and staying in tents along the water’s edge.

The entire malecon was as crowded as the above photo. The people selling food and other things were making money, hopefully enough to last through some of the lean days that come up after the holidays. 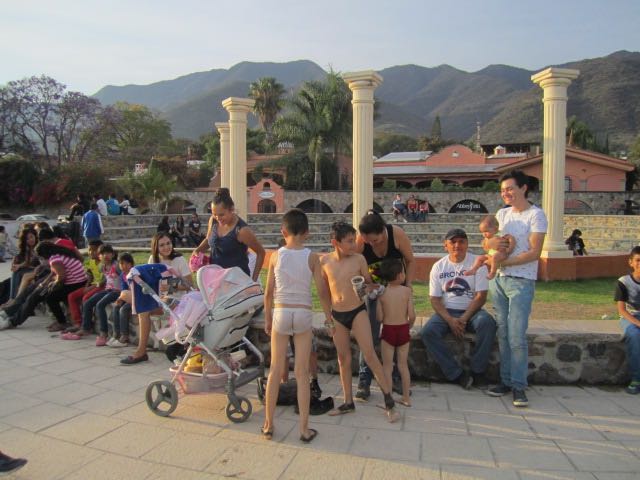 As you can see in the above photo, the boys had been out swimming in the lake. Obviously, one boy left his bathing suit at home. He had to make do with his underwear. Nothing will stop a boy from swimming.

There were many people riding horses along the shore. This young man was showing off his dancing horse.

I missed many of the celebrations but I made it to the plaza the evening that the actor playing Jesus rode into town on the donkey. I didn’t get photos because it became so crowded that I left early. But I took photos of some of the food stands that were busily feeding people in the plaza. I tried food from most all of them and it was worth the walk to the plaza for me. Everything was delicious. I especially enjoyed the traditional Mexican food.

I saw many people selling various religious articles that were made out of palm fronds. Some of them were beautiful.

This little girl sat in the plaza for a long time with her palm religious articles. She seemed more interested in action around her than in selling.

The entire plaza was decorated with these paper cut outs.

These two young boys were relaxing in the plaza before participating in the walk.

I like this photo of the men dressed in costumes of Jesus’ time but using their cell phones. They thought it was funny too. The young man in the back also has a modern camera around his neck. Wish I had a camera like that.

There were several Empanada stands. The Empanadas were stuffed with all kinds of different things from meat to fruits. This is a popular Easter food.

The photo above was taken another day just before the pageant of the trial of Jesus. It was many hours before it started. I walked around and took photos but missed the trial. I was too tired and hot to stand around any longer.

I took this photo before the pageant went into the church grounds. These religious pageants are very powerful and moving, especially if you are a Christian.

Performers filtering into the church grounds for the trial of Jesus.

The photo above is of Jose Melendrez. He is holding his famous second place winning bread pudding. During the Easter holidays every year there is a contest for the best bread pudding which is also called Capirotada. It is often served on Fridays during Lent. The ingredients symbolize the passion of Christ. The bread represents the body of Christ. The syrup is his blood, the raisins are the nails of the cross, the whole cinnamon sticks are the wood of the cross and the melted cheese is the shroud. And all of it is DELICIOUS.

Above is a group of Mexicans dressed as native Indians. They had recently arrived from Chiapas. They were dancing for tips.

I just took the above photo because I thought it was charming with the elderly man and the little girl playing with the baby. If you like to take pictures, this is a great time of the year for it. So much to see.

All during the holidays there were many different craft stands in and around the Ajijic plaza. A great time to think ahead and buy Christmas presents.

This last photo was taken at the end of the malecon. It is too dark for you to see the people in tents along the water’s edge. Another Semana Santa comes to a close. Hope you can make it down next year if you missed it this year.