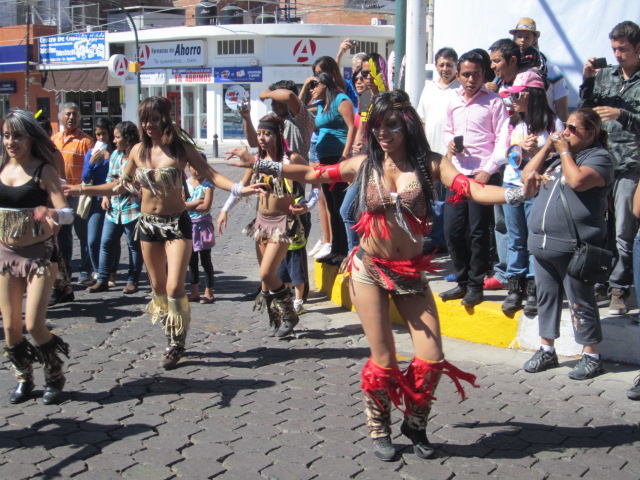 The Mardi Gras parade was held in Chapala along the main road on Sunday, February 10th. It was scheduled to start at ten a.m. Since I am always early to things, I arrived at nine thirty. It didn’t get started until eleven thirty. In my article about the Carnival, I had promised take photos after the parade of the car show in the Carnival. Plus photos of the beautiful young women in the car show and handsome young men and also photos of the ice skating rink. (I know, it is hard to believe there was an ice rink in the park in Chapala on a hot afternoon and I wanted to prove it to you.)

But after three hours of standing in the hot sun at the parade, I had to break that promise. I went home instead and took a nap. I hope these parade photos will make up for the ones I missed out on at the Carnival. There are lots of photos of beautiful, scantily clad dancing girls and handsome young men. Enjoy.

The parade started off with motorcycle policemen, followed by motorcyclists wearing costumes and masks. There was also one that looked like a coffin. Scary stuff.

As promised, here is the first photo of dancing girls. They were doing an Hawaiian Hula dance.

Here come the beauty queens. It is good that they put the pretty girls at the beginning of the parade and the horses at the end of it. Practical thinking.

Where there are pretty girls, there are handsome men. Check out the man sitting on the curb with his hand on his chin. He is enthralled.

I love this float. There are three generations of lovely women on it. I wonder if they are related to each other.

The freestyle dancers were dancing up a storm as you will see in the next photo.

Below is the most extravagant float. It must have been a lot of work to make. I was impressed.

More dancing girls were on the float in the photo below. They were having a lot of fun and so was the crowd.

There was music with almost every entry. Huge speakers were blasting out music for all these dancers and also there were several bands.

I enjoyed watching the girls dressed in the short Mariachi costumes. They were dancing and twirling batons.

The gymnasts stopped every few yards and did tricks. They must have been exhausted at the end of it all.

I don’t know which groups were from Guadalajara and which were local. There were no leaflets passed out with information about the parade. I liked the group in the next photo because they were my age group and older. But I have no information on them. All I know is that they were having a great time. I wanted to get out and walk with them. Except I didn’t have orange hair and an orange suit.

Next came the cowboys and horses. Some of the horses were dancing.  This is always my favorite part of parades.

The next photo is the beginning of the cars. Spider man was riding in the spider man car. He got a lot of attention. Especially from the children.

There were many classic cars in the parade. I am guessing that they were on their way to the car show in the park.

I am looking forward to next year’s parade but I will try to remember to arrive at least an hour after it is scheduled to start.

The Open Studios Event by the Ajijic Society for the Arts