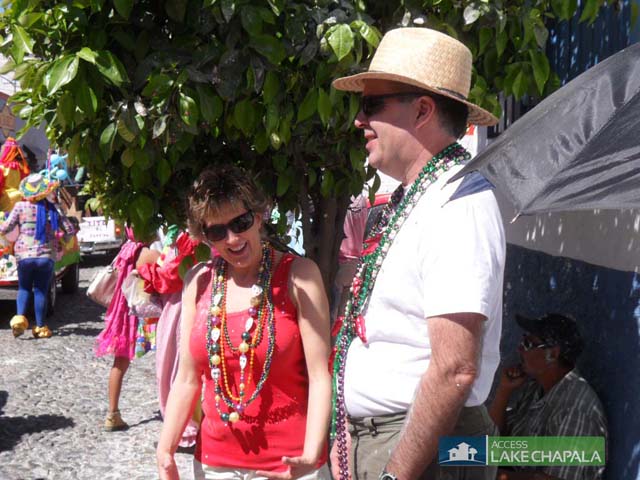 Mardi Gras is a French word meaning Fat Tuesday. Fat Tuesday refers to eating rich and fatty foods the day before fasting of the Lent Season. Ash Wednesday starts off Lent.  Fat Tuesday is sometimes referred to as Shrove Tuesday from the word Shrive. Shrive means “confess” which relates to the Lent season. Fat Tuesday is the last day of Carnival season, a time of parties and letting go of inhibitions before the season of  fasting, obligations and confessions of Lent. For sure, people at the Mardi Gras parade in Ajijic yesterday were letting go of their inhibitions and having fun.

Crowds were gathered all along the road, anxiously awaiting the parade. The tradition of wearing masks and costumes, overturning social conventions, dancing, and parades was very much alive at this year’s Fat Tuesday.

The Mardi Gras parade was inherited from pagans. At the end of winter, the people who survived it would throw flour (the symbol of life) into the fields. Today maskers throw it into the crowds as an appreciation of them coming to witness the parade.

The parade in Ajijic always begins with hoards of boys running down the street to get away from the flour throwers. But most of them have already been hit and they are covered in flour. Never stand in the way of these running boys. They are going too fast to stop.

Sometimes people throw beads. The traditional colors of the beads are green, gold and purple. These colors represent the gifts the Magi brought to baby Jesus. Green represents Frankincense and Justice. Gold represents Myrrh and Faith. Purple represents Gold and Power. Gold also means good luck and white means kisses. So you can see why people scramble after these beads. Mostly, they are just floured.

Some kind of stand off was happening between the girl in the dress and the young men. It was probably the beginning of a flour war because she had her hand in the bag that was hanging to her side.

The parade is a perfect time for young men and women to let go of their inhibitions and play. Balloons for breasts and butts are popular with both sexes. Everyone has a sack of flour to throw into the crowd and at each other.

I think the person in the orange and white dress in the above photo was a woman but I can’t be sure. This parade is a cross dresser’s dream.

Besides a lot of running in this parade, there is much dancing. Music is everywhere.

There were several bands. So far, this band hadn’t gotten floured.  I wonder if flour is as bad for those instruments as it is for cameras.

There are always a few brave people walking on stilts inside of  costumes. I have seen them fall. Not a pretty sight.  Those are paper mache heads.

All the man in the above photo needed was water and his head would have become paper mache. I asked him how he got so much flour on his face and his answer was to stick his tongue out at me. He said it attracted flour every time. I don’t know why he wanted to be covered in flour. I was ducking into stores to avoid being bombarded. To each his or her own.

Where ever there is a parade, there are beautiful young women and this parade was no exception. I have no idea of how they go about the process of choosing the queen and then the lesser beauties. To me, they are all equally beautiful.

The above float looks familiar. I think I saw it in the Chapala parade on Sunday.

I doubt if the girls in the above photo were interested in being involved in any beauty contests.  They were just having fun.

Mardi Gras season and Carnival are the same thing. It starts on January 6th, which is called Three Kings Day and also Epiphany. This is 12 days after Christmas. The season lasts until Midnight before Ash Wednesday. Ash Wednesday is the first day of Lent which lasts for forty days.

I have no idea what significance the cow plays in the Mardi Gras celebration, or the bull, which is coming up in the horse section of this parade. One year they had a float of the bull doing unmentionable things to the cow. This year it was tamed down. The cow had her own float and the paper mache bull was retired. A live bull took it’s place.

The girls in the Hawaiian costumes looked a little tired by the time they came to where I was standing. Some of them had been floured and others were flouring the onlookers. Great fun.

The horses came last for practical reasons. I loved seeing the beautiful dresses and cowboy outfits. There were also some dancing horses.

The bull didn’t seem to mind being paraded down the street along with the horses. Maybe he liked showing off that necklace of paper flowers.

I think the boy in the above photo was the youngest cowboy in the parade. His horse was being led by the boy’s grandpa.

Another Mardi Gras parade passed by and the streets were white with flour. Such joy. This is my favorite time of the year here, so many interesting things are happening during Carnival season. Or Mardi Gras season. Call it what you will. I call it FUN…..