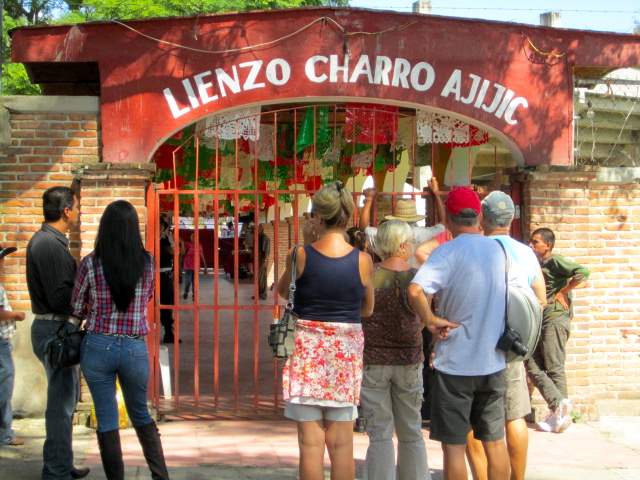 The rodeo was scheduled to start at four in the afternoon. Very few people showed up at that time, mostly expats. I am assuming that the Mexicans didn’t take an opening time too seriously. As we say in Ajijic, M.T. (Mexican time) or E.T. (Expat time).  This event was on M.T. It didn’t open until almost six p.m. But the wait was worthwhile. What else is there to do in Mexico except sit in the sunshine and enjoy the birds? No hurry. No worry.

The rodeos are held in the arena on Revolution street. This is the same street where the Wednesday market takes place. The entrance fee for the rodeo was a hundred pesos but only a hundred and thirty pesos for two people who pay together. The woman at the ticket office kindly informed us of this, saving us enough pesos to buy some peanuts from the elderly man out front. I was there with my friend Pat.

The above photo is the inside area, before the arena.  There are a couple of food stands which are set up closer to the stairs to the arena.  They were selling fruit drinks and little bowls of cut up hot dogs and cold fries. Also colored marshmallows. Pat and I decided to stick with the peanuts.

The soccer field is next door to the arena and some of the men were enjoying the game before the rodeo got into full swing. Two events for the price of one. Not bad.

Below is a wide photo of the rodeo ground and the bandstand. The band had already started playing. They were loud and in high spirits. Lots of drumming and other percussion instruments.  What would an event in Mexico be without the loud, raucous music?  It was in sharp contrast to the empty ring.

It must have been another forty five minutes before the cowboys started wandering into the ring on their horses. This was a casual, unorganized event.

The first cowboys were getting their horses to dance to the rhythms of the band. I had seen some of them in the parade earlier in the day.

Some of the cowboys were socializing with their friends. Others were drinking beer. No pressure.

The event appeared to be geared to the time schedule and pleasure of the cowboys, not the audience. It was a small audience. Word must have gotten around town about the slow pace of this event.

I took the above photo of this future cowboy while he was smiling at me and hoping I would focus my camera in his direction. After I took the photo, he climbed up on one of the walls and started practicing his rope tricks. Unfortunately, my photos of his expertise didn’t come out. I enjoyed his enthusiasm. Nothing else was happening in the ring.

I was starting to get nervous for him as he balanced on that wall. But he must have done it many times before. He had no problems standing on it and roping at the same time. So far, this was the most dangerous and exciting thing that had happened at the rodeo. Pat and I were getting impatient.

I only put one photo of the above cowboy and his dog on here. I must have taken thirty photos of the dog chasing him around the ring while the music blasted.  The cowboy also threw his hat on the ground and bent down and picked it up many times, until he finally fell off his horse. The small crowd got a kick out of that trick. I guess they too were getting tired of his performance. He was happy to be the center of attention.

Finally, more cowboys ran into the ring and bowed down to say their prayers before the main event, the bull riding.

Above is a photo of the first bull getting ready to burst through the gate with a brave cowboy riding on his back.

The rodeo clown was preparing himself to distract the bull after the cowboy fell off. The cowboy always falls off, sooner or later. This one lasted long enough for me to take two photos.

After he fell off, he ran. And the clown closed in to distract the bull. I don’t know which job was more dangerous. I wouldn’t volunteer for either of them.

No one was hurt while I watched but I didn’t stay until the end. It was already two hours into the event and I was tired from all that waiting. Next time I must remember about coming late to things.

Check out the bull’s horns. They are wrapped to protect the cowboys from their points. This brief bull ride made all the writing worthwhile for me. Pat and I were ready to go home and rest in comfortable chairs. I could hear it going on until much later into the night.

The rodeo is mostly an event for young men. They have the energy and stamina to sit for hours and even to sit on high fences.  I enjoyed it until I got too tired. I loved seeing the cowboys on their horses. So much bravado involved in a rodeo. Bravado and sometimes foolishness after some of them had too many beers. It was all in good fun.

One thought on “September 16th Rodeo at the Lienzo Charro Ajijic”