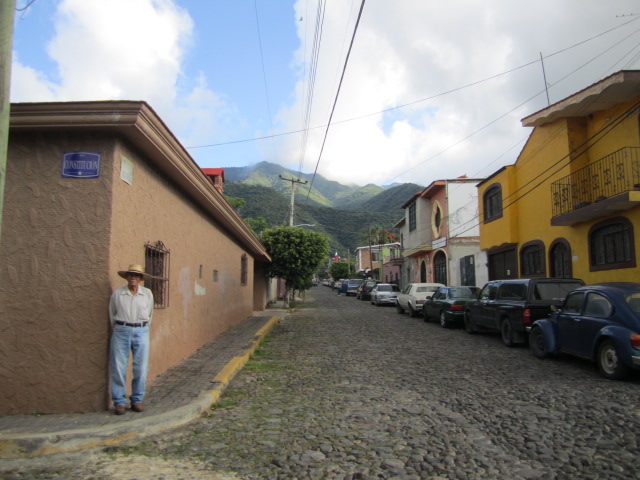 The Mexican Independence Day celebrations actually start on the night of Sept. 15th.  Every plaza in Mexico has  a reading of El Grito de Delores, just before midnight. That is the proclamation that Father Miguel Hidalgo, a Catholic Priest, read in the small town of Dolores in Guanajuto, MX. on Sept. 15th, 1810. This proclamation started the uprising that became a war against Spain. It lasted for eleven years. When the proclamation is read every year in the plazas, the crowds answer by shouting Viva Mexico. Fireworks are shot off and people celebrate their hard won freedom. The war lasted for 11 years. It didn’t end until Sept. 25, 1821. On Sept. 16th, every year, there is a big parade.

This year it was a more somber affair than what I remembered from last year. It was mostly marching school children and horses. It was still exciting for me to witness. I was up and out early, before people started gathering for the parade. I enjoyed the quiet streets at that time of the day.

The crowds started forming along the streets not long before the parade. I must have been the only one who believed it would start at ten a.m. It was much later by the time the children came marching down the street.

The children gathered on the corner of Constitution and Revolution streets. Those were appropriate street names for the nature of the parade.

The children in the above photos are marking off where they should be standing in relationship to the children marching near them. There was a lot of energy in the air. They were excited and anxious to get started.

The children in the above photo were expressing more nervousness than excitement. I couldn’t help but feel sympathetic towards them. That one boy’s expression looked more like he was going before a firing squad than marching in a parade.

The teachers always walked beside their classes. I loved watching how they managed their children. Some were stern and their children marched like little soldiers. Other teachers were more relaxed and so were the children. These girls were very disciplined. Check out the expression on the teacher’s face. She knew how to control them.

There were several marching bands and the same rule applied to them. Some were relaxed and out of step and others were very controlled, like the military. Above was one of the more relaxed groups. I enjoyed all of them.

The classes had banners that were carried in front of the marching children.

Above was a more disciplined group of drummers. It was fun to see girls with drums. They obviously had been practicing for many hours.

Some of the uniforms were very elaborate. These children showed a lot of discipline. Children of all ages were marching.

After the marching children, which took a very long time, the horses arrived. I always get excited when I see the horses and especially the dancing horses. These men were carrying the banner with the Virgin of Guadalupe painted on the front. She became the banner of the revolutionary forces as the soldiers pressed into Mexico City. Fifty thousand rebels had gathered and destroyed the cities of San Miguel, Guanajuato, and Celaya at that point. Father Hidalgo was having misgivings and withdrew before they reached Mexico City but he was captured and killed within a year of his revolutionary speech. There was no turning back. He had started it all and it took eleven years before it was over on Sept. 25th, 1921. The Mexicans were finally free from Spain.

People of all ages were riding the horses. I liked this little boy. He was all dressed up in a Mariachi suit and waving at the crowd.

There were beautiful young girls wearing long flowing skirts in the colors of the Mexican flag, green, white and red.

I am guessing that it was the first parade for the little boy in the above photo to be riding by himself. At least I am hoping it was because he was a tiny thing.  His parents must have had a lot of confidence in his riding ability. Most likely they were horse people from way back. He may have been riding horses since he was in the womb.

Above is one of the dancing horses.

Another dancing horse. I don’t know how they train their horses to dance but I suspect it involves some pain for the horses. I have seen them near the lake in a distance as they were doing the training. The horses didn’t look very happy.

I only saw one float in the parade. Last year there were several floats. I don’t know what happened this year. As I already said, this was an austere parade.

There was nothing austere about the two beautiful women on the float. What would a parade be without beautiful young women?

The children in the above photo were sitting on the sidewalk, enjoying the passing parade. I wonder why they weren’t in it. Maybe they were too young. Maybe next year it will be their turn.

The above photo was of the crowd that had gathered at the Plaza. The parade went down to Six Corners, turned around and came back to the plaza. It was an exciting morning.  I am glad I got up so early and was able to see it before the crowd arrived. Sometimes there is an advantage to always being early to things.

Crime and Safety in Lake Chapala? Are We Safe in Mexico?