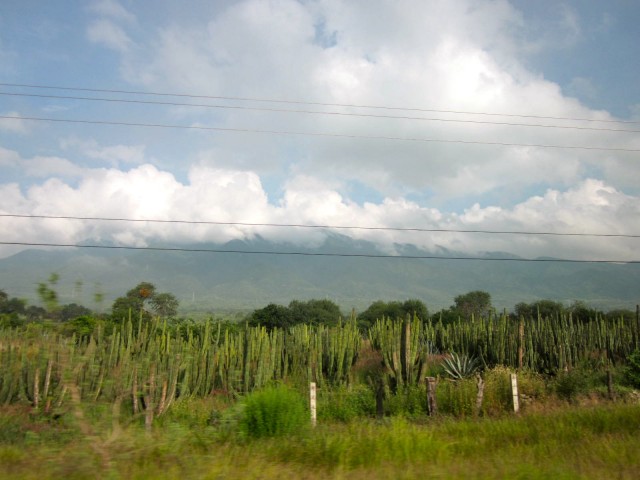 There are many interesting places to visit around the Lakeside area. Some of them are close enough for a day trip and others require an overnight stay in order to have enough time to see everything that is of interest.

Sayula is approximately sixty miles south of Ajijic. It can easily be reached by car in about an hour and a half. You can go by bus but you have to go to Guadalajara first and that adds more travel time. A bus trip would be much more relaxing as a two day adventure.

The drive to Sayula goes through beautiful green farm country. There are mountains in the distance and when the clouds hang over them, the view is spectacular.

We also passed salt flats, although this time of the year they are filled with water.

There are several hotels in Sayula. One hotel is La Casa de los Patios. It is a hotel and spa.

There are eighteen rooms, a swimming pool, a restaurant filled with plants, a steam room, and many other amenities.

You can get massages if you like and they have package deals that include the hotel and the spa. Their web site is: www.lacasadelospatios,com

My friend and I had lunch in the restaurant. He had a traditional Mexican meal and I had a hamburger. It was reasonably priced but the food was nothing to write home about.

If you visit the hotel, be sure to check out the ghost of Sayula in the bar. There is a local legion that a poor, honest campesino, Apolonio Agullar, met up with the ghost at midnight at the gates of the cemetery. The ghost was offering riches to anyone willing to make a deal with the devil.  Apolonio Agullar took the offer and the price was higher than he had anticipated. There is a statue of him, and the ghost in the plaza.

The ghost in the hotel bar has bag of gold in one hand.  If you pull on the bag, you will see the high price Apolonio had to pay.

Another nice hotel/spa in town is the Gran Casa Sayula. You can go to their web site to see photos and prices. The web address: www.grancasasayula.com

The central plaza in town is beautiful and clean. The yellow buildings surrounding the plaza have arched fronts.  There is a Mercado in one of the buildings. The bus station is close to the plaza.

I did not see another expat while we were visiting the town but I know they come into town often. People visit from all over the world, mostly to buy knives at the famous Ojeda knife factory, which is a few blocks from the plaza.

The Ojeda family has been making knives for twelve generations. Their store opened in 1810.  Some of the knives take a month to make. They also make the leather sheaths.  Each knife is a work of art. The blades are made of forged steel.

Many of the blades are etched with pictures of various wild animals or birds. The handles are made of bones of different animals. It is a pleasure just to look at these knives.

We were lucky. We were allowed to visit the factory. It was a busy place. The grandfather, Jose Ojeda, was there. He still works in the factory. He was very gracious to us and allowed me to take photos.

My friend is a knife collector and he was like a kid on Christmas Day. He wanted to buy them all. Since each knife takes many hours in the making, they also come with high price tags.  One knife that we saw costs five thousand dollars. I am not talking pesos here but American dollars.

The Ojeda family brings their knives for sale to the Chili Cook Off in Ajijic and also to the Maestros del Arte show in Chapala in November. This year it will be on November 18th, 19th, and 20th. Don’t miss this show. Artisans from all over Mexico bring in their crafts for sale. It is always a special event.

We were only visiting for a few hours but I could see that it would be fun to stay for a few days. I liked the quiet atmosphere of the town. Everything was slower paced than in Ajijic.

The Mexican people were friendly to us. There were several interesting looking restaurants around the plaza. If I had a lot of money, I would check into one of the hotel/spas and have the full treatment from manicure to massages to steam room visits.

Sayula is a good example of a typical Mexican town with the added benefit of some beautiful hotels. I also saw a public swimming pool as we were driving into the town.

Directions:  Take the Autopista Mex 54 South from Jocotopec toward Colima. Get off at the Sayula Exit. Drive into town and after five blocks you will reach the plaza with the ghost statue. Two blocks south, on Daniel Larios St. is the Ojeda Knife Store. One block east on Vallarta St. is the hotel/spa La Casa del Los Patios.

The directions are simple but my friend got lost as we left town. The problem is that there are many one-way streets and it is easy to get turned around. We wandered around the back streets for a long time before we found our way back to the highway. Since I wasn’t the frustrated driver, I enjoyed seeing the houses and fields along the way.

I liked Sayula. I would definitely go there again and stay a few days on my next trip.

One thought on “A Day Trip To Sayula Mexico”