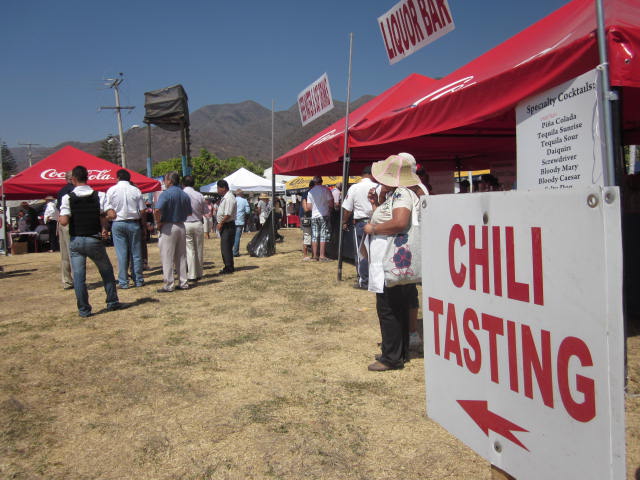 The Chili Cook-off is the largest fund raising event of the year in Lake Chapala. It was started 33 years ago with just six participants, a banjo and a barbeque grill. It has grown since then. Now the expected paid attendance is 7,000 people with more than 100 vendors, scores of entertainers, and 30 cooks competing for awards. This year was the largest parade in cook-off history, and over 250 volunteers helped to make everything go smoothly.

It was held at the water park grounds, Tobolandia, on the carretara in Ajijic. The two corporate sponsors were Coca Cola and Corona. They provided 80 small tents and two huge canvases to keep the spectators, cooks and tasters in the shade. There were over 100 arts, crafts, commercial and charitable vendors. I went on Saturday with two friends. There was a huge crowd. They had so many cars that they had to shuttle people back to the grounds because it was too far to walk. There was a sense of excitement in the air.

At the entrance there were several policemen but they were enjoying the shade and each other’s company. It was probably like a day off for them. I didn’t see any reason for them to work too hard. Everyone seemed to be having fun.

The Shriners helped with the parking. that was an enormous job.

The mayor of Chapala, Jesus Cabrera Jimenez, was also standing near the entrance to welcome people. The mayor was with two of his friends and I didn’t get their names or positions.

The Red Cross had one of the first booths and they were doing free blood pressure testing. They also had an ambulance. The Red Cross maintains two ambulances in this area and the chili cook off is one of their main fundraisers. It was reassuring to see the well-equipped ambulance. I hope I will never have to use it, but you never know about those things. They were passing out cards with emergency numbers. Keep it near your telephone, I was told by the volunteer passing out the cards.

There were many food, art, craft and information booths. Some of them I recognized as locals. Others may have been from out of town. I loved seeing the beautiful crafts.

The Lake Chapala Society had a book sale all three days.

There was nonstop live entertainment. There was a rock and roll band playing part of the afternoon when I was there on Saturday.

I made it there on time to see the dancing horse show. I never get tired of watching them. They had huge speakers set up for the music.

There was daily chili and salsa tasting during the People’s Choice competitions where you could vote for your favorite cooks. Friday was the salsa competition. Saturday was the Chili competition and Sunday was competition of Chili made by the restaurants. Beans are not allowed in the chili competition. The tasting began at 1:30 in the afternoons and ended at 3:30. Last year over 300 kits were sold. You bought the kit for 10 pesos and then walked through the line, getting a taste of each participant’s chili and then you voted on your favorite one. Only chili was served during the judging. No garnishes, chips or beverages could be served to the voters. The winners were announced between 4:30 and 5p.m. of each day.

There were hourly raffles and you needed not be present to win. There were vacation get aways, airline discount certificates, some great golf, fine meals and fantastic jewelry. Local charitable merchants donated a wide variety of gifts.

Besides the chili there were many other food booths selling hot dogs, chili dogs, bowls of chili, tacos, barbeque ribs, Mexican food, Chinese food and even Texas food. I had a delicious hamburger.

There were drink booths and fresh fruit booths. They were even passing out free cake to everyone. Costco provided the cake. No reason to go hungry there.

The following are the organizations that are supported by the cook-off.

Cruz Roja de Chapala
The Red Cross of Chapala.
Their two ambulances are in service at all times, one in Chapala and one on the West side of AJjjic. They are staffed by trained Paramedics and equipped with oxygen, EKG and defibrillators, backboards and a full array of emergency equipment. They respond to every-day emergencies, including car accidents. There is also an urban rescue unit for extracting trapped victims from auto crashes, rooftops, wells and mountainous areas.

This facility was created to improve the quality of life for the less fortunate families around lake Chapala. It offers family planning and Sexual and Reproductive Health Services, medical consultations and talks in local communities and schools.

Casa de Ancianos de Chapala
Home for the Elderly Citizens in Chapala.
It was founded in 1972 as a non-profit home where elder residents of Lakeside, who have significant health issues, can expect respectful, compassionate care. It has 24-hour nursing care, doctor visits, a loving staff and nutritious meals.

Los Ninos de Chapala y Ajijic
The Children of Chapala and Ajijic (NCA)
They have been providing educational scholarships for Mexican children since 1970.
They support Lakeside area’s underprivileged children. They provide tuition fees, school supplies and uniforms and a monthly supplement. In some cases they provide accommodation and transportation assistance.

Los Ninos de San Antonio.
The Children of Can Antonio
They provide food and other supplies to area children and families. They also provide workshops to educate family members.

They provide assistance to over 200 children and young people with disabilities such as cerebral palsy, diabetes, cancer and birth defects. In addition to paying for wheelchairs, orthopedic braces, eyeglasses and other medical equipment, the organization pays for medications, x-rays and diagnostic tests. They are all volunteers and they have been helping kids in the Lake Chapala area for over 18 years.

Escuela Para Sordos de Jocotopec
School for the Deaf in Jocotopec
They provide professional education for deaf children, teaching them sign language and how to read, do sculpture, carpentry and art. They provide all types of hearing devices and everything related to the enhancement of their hearing defect. The school in Jocotopec is presently serving 110 children.

Jim Hussin is the president of the Chili Cook-off. They will be starting the plans for next year right away. If you have questions please call Don Howe or Jim Hussin at 376-766-5784 or email to: donandjim@prodigy.net.mx

The chili competition is limited to only 10 applicants so don’t want too long for next year’s monster bash.