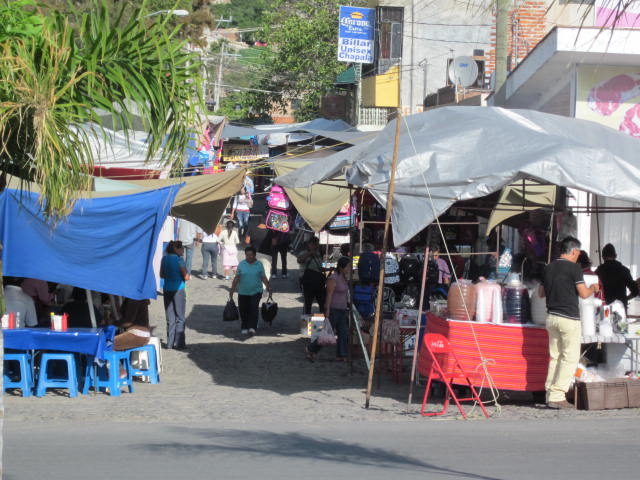 The open markets are called Tianguis in Spanish. They are not to be missed. The best word I can think of to describe the market is ABUNDANCE.  There is an abundance of everything, including people. The Chapala market is not hard to find. It is at the top of the main street in Chapala, across the street from the Pemex gas station.

You can easily catch a bus, either the large bus that goes to Guadalajara or the small bus that wanders through the towns.  The buses stop on almost every corner. Just wave one down. It costs less than a dollar to go to Chapala from Ajijic (see our map here). It is just as easy to get a bus leaving the market area as it is to get there.  They all eventually get up to the Tianguis. Be sure if you catch the large bus that it doesn’t say Guadalajara Libramiento Directo on it because that one bypasses Chapala. Best to ask the bus driver if he is going to Chapala.

The market usually don’t get started until around nine thirty in the morning and by two in the afternoon sellers are beginning to pack up the stalls. The busiest time is from ten thirty a.m. to noon.

I tried to count how many blocks I was walking when I was in the market but it was too difficult. The blocks are very long. I am guessing that it is at least eight blocks altogether, maybe more. It is more than twice the size as the Wednesday market in Ajijic.

I saw many of the same vendors that are at the market in Aijijic. They start out on Mondays in Chapala and work their way west. Wednesday they are in Ajijic and Thursday they are in Jocotopec. It looks like a hard way to make a living, always hauling their things from one market to the next. Putting up and taking down their stands can take awhile, especially if it is raining.  There are many more stands in Chapala than in Ajijic. There must have been at least twenty eating stands in the Chapala market. There aren’t any more than four five in the Ajijic Market.

Some of the food stands in the Chapala market are large and some didn’t even have tables and chairs. All the food smelled delicious on my walk and they were busy. I always choose the stand with the most people. I figure that the Mexicans know the best places to eat.

Just about anything you would need or want can be found in the Chapala Tianguis. I even saw beds for sale there. I didn’t envy the man who had to haul them around from market to market.

There are many clothing stands. Some are new clothes and some are piles and piles of used clothes. Most of the used clothing stands are towards the north end of the market, up an incline. Be sure to check the used clothes very carefully. I found a shirt I liked. I was ready to buy it when I noticed a huge stain on the back of it. I hadn’t bothered to turn it over. I went through the pile again and almost all of the shirts had stains. Maybe that is why they were so inexpensive.

Walking in the market in Chapala isn’t for the faint of heart or for anyone with problems getting around. You are walking on cobblestone streets that aren’t even. There are large rocks sticking up and holes where the rocks are missing. You have to watch every step or else you will fall down and possibly break a bone.

People jostle into you and there are so many interesting things that can distract you from watching the ground where you are walking. I can’t stress this enough—- Be Careful Where You Step!

It is possible to get just about everything at either the entrance or the exit and then avoid the steep incline in the middle. I would suggest that to anyone who might be worried about the treacherous cobblestones.

Since I live a block away from the Ajijic market and I don’t have a car, I always walk up there to do my weekly grocery shopping. I have a metal cart with wheels.  Today is the first time I have walked through the Chapala market in several years.

I was surprised to see so many familiar faces from the Ajijic stands. Most of the venders recognized me too. That felt good. I like feeling like I am part of a community.

I enjoyed seeing all the stands that aren’t in Ajijic. There were so many new faces and interesting things to see.  I usually run into several expat friends when I walk the market in Ajijic. Not so in Chapala. I think I only saw one other expat among the hundreds of shoppers.

I have been told that the market in Chapala is less expensive than the Ajijic market because the Mexicans mostly frequent it. Maybe they are more aware of fair prices for things than the expats. I didn’t buy much because I had a long walk and a bus ride to get back to Ajijic. I can’t say if this theory is true or not.

I have also been told that it is easier to negotiate prices in the Chapala market than the Ajijic market. This is another theory I can’t say is true or not. Try it and see what happens. All they can do is say no.

I love the excitement and activity in the open air markets, the Tianguis. Market day is always my favorite day of the week. I feel very lucky that I just live so close to the Ajijic market. But if I lived in Chapala, I would definitely only shop at the Chapala market.  It is a great place to buy just about anything.

There are several stands that just sell shoes, stands for DVDs, stands for fruits and vegetables, stands for clothing. As I said at the beginning of this article, you could probably find anything you need or think you need there.  It is also an interesting place to take pictures.

The Ajijic Market, starts on Calle Revolucion. Revolution goes down from the main road, the Carretera. It runs along beside Salvador’s Restaurant and down four or so blocks.

The market in Jocotopec is located near the main Plaza. Just walk in that direction and you will find it.

One thought on “A Walk Through The Chapala Monday Market”