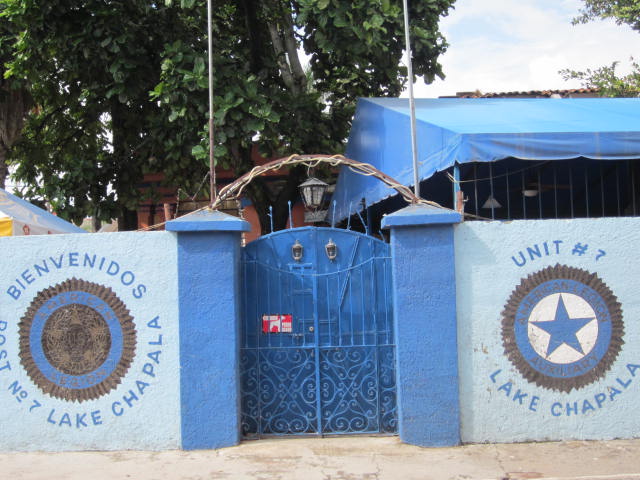 The American Legion is the central meeting place for expats in Chapala, just as the Lake Chapala Society is the center for the expats in Ajijic.  Everyone is welcome at the Legion. You don’t have to be a member to participate in the events, to eat in the restaurant or to have drinks in the bar.

Their address is: American Legion Post 7, Calle Morelos 144, Chapala, Jalisco. It is just a few blocks from the main plaza and half a block from Christiana Park. There is always parking available on the street.

Their fiftieth anniversary is coming up next year on the 16th of November.  I am sure that will be a big celebration.

Tom Keehnan is the commander now. This is going on his third year as commander. There are elections every year. Tom is hoping this will be his last year. It is a lot of work to be the commander.

Tom’s wife, Jami Keehnan, is going into her second year as president of the Auxiliary. For now, only women are in the Auxiliary but there is a movement on the national level to change that. With so many women in the military now, it would be nice that the husbands of these women could become members of the Auxiliary.

The men at the Legion are in charge of the patriotic holidays, Veterans Day, Memorial Day, Labor Day. The women do the other dates. The day-to-day business license is in the women’s name and they are in charge of the finances and paying the bills. A committee manages the restaurant.

In order to become a member of the American Legion, you have to have been in the military within their guidelines. For example, if you were in the Army between Dec. 20, 1990 and Jan 31,1990 you qualify if you were in just one day of active duty during that time. It changes with each branch of the military. You can get the dates from Tom. You have to have been honorably discharged or still be serving honorably. The yearly dues are 48 American dollars.

The Auxiliary is much less expensive. The yearly dues are only 150 pesos.

The next large celebration is called, Hot August Night. It will be an evening of dining and dancing with entertainment by Ricardo. The menu is going to be Ribs; Twice baked potatoes, corn on the cob, bread and dessert. Cocktails will start a four in the afternoon and dinner will be at five. Tickets are 130 pesos. They are available at the Legion or from members.  This is the first event that both the auxiliary and the Legion members are sponsoring. The money will be split 50/50 between Legion and the Auxiliary. All the money made by the Legion and the Auxiliary is kept separate. The Facility is also a separate entity. That includes the kitchen and bar.

The Legion members and the Auxiliary members have different charities they contribute to every month. The Legion donates to the Cruz Roja. The Auxiliary donates to the Little Blue School in Chapala. It is for children with developmental challenges. They range from 3 years old to 28 years old.

Last month Jami did a project for the Little Blue School, Christmas in July. They gave gifts to each of the 42 children.  August and September project will be called “Sock It To Me.” They are going to give socks to all the teenagers in October.

They also donate food to Mascala School. It is for teenagers. They decided on this project after a teenage girl committed suicide because she was hungry. It is a very poor community.

Labor day is always the first Monday in September. The Legion members are planning a big celebration.  The men will be planning it. The food will be picnic style; Corona Chorizo, which is chorizo, steamed in beer. Chorizo is a delicious pork sausage.  There will also be Chicken Breast Sandwiches and BBQ Beans. I am sure there will be other things too. The cost will be 100 pesos. Sounds like a good deal to me.

There are 140 paid members of the Legion. Tom said there is no way to count how many other people use the facility and go to the functions. He is guessing that at least twice that many people use it.  There is something special planned at least once a month. During the high season there are more events.

September 16th is Independence Day for Mexico and the Auxiliary is in charge of planning that event.

Every month on the first Friday of the month there is a yard sale.  For a small fee, you can rent a table and sell your unwanted items, or else, buy things you need.

The American Consulate is at the Legion on the first Wednesday of the month. He doesn’t stay very long, less than an hour and then he goes to the Lake Chapala Society. Call the Legion to find out the time he will be there.

Happy hour at the bar is from 3 p.m. to 6 p.m. Monday through Sunday. All lower shelf drinks are half price. The bartender is there from noon to 8 p.m. but if you want a drink before noon the waiter will get one for you. The Legion is open until 8 p.m. every day.

There are Spanish classes two days a week on the Legion grounds. People come in and play Pinnacle and Bridge. If you want to arrange to have a group use the grounds, you have to get permission. Otherwise, there would be chaos.

The Maple Leaf Club meets there at 3 p.m. the first Thursday of the month.

The Lone Star Club meets there on the last Thursday of the month at 3 p.m. You don’t have to be a Texan to join. You just need to have an interest in Texas.

Jamie and Tom have an interesting background. They have been married since 1978. They lived on an island, Bahrain, in the Persian golf for two years. Then for four years they lived in Dubai. It was a little fishing village at that time. Then they lived for two years in Pakistan.

They are a well-traveled couple and I enjoyed talking with both of them. They are friendly and don’t put on airs. I was impressed with how competent they were and how they handled difficult situations at the Legion. When I was there, a woman was unhappy with something that happened to her there and they were great at calming her down. It must be very stressful for them to have so much responsibility. Their telephone number is: 765-2048.

Every Sunday from noon to 3 p.m. there is a BBQ on the patio. The money raised at it goes to help support the facility.  They have grilled onions, hamburgers, hot dogs, potato salad, and beans. The food is delicious and the meal is only 35 pesos. I was there last Sunday and the place was packed. During the high season they also sell key lime and chocolate pie.

There is also a Writer’s Group. Victoria Schmidt runs it but it is a closed group, only for people who are writing long pieces, like novels. It is by invitation only. Right now, they only have 16 members. They don’t want a large group. They meet twice a month. You can call the Legion to ask her about it. She runs the office.

Mary Pumiglia is in charge of selling tickets for all the events. She also makes up the monthly flyer. She and her husband Zane operate and sponsor House and Entertainment meetings, also known as H & E.   They meet once a month and make up the calendar.  You can reach Mary and Zane by E-mail at: zanymar@yahoo.com or call them at (376) 765-2660.

When you visit the Legion, go into the bar and pick up their monthly magazine, the Roll Call. It has lots of information in it, plus many articles. I was browsing through the July issue and found recipes, articles on Military History, Veteran’s Health, Memorial Day, Mexican History, Charity, an Obituary, a message from the Auxiliary President, the restaurant menu, a list of the July activities and many other interesting articles. The magazine is free. Also, they have a flyer on the bar that has all the scheduled activities for the month.

If you are interested in going to any of their events, you should buy your ticket in advance. They can only serve 120 people at one event and the tickets sell out fast. You can buy your tickets at the Legion.

There is a large library of mostly paperback books. You have to be a member of the Auxiliary or the Legion in order to use it. It is open whenever the Legion is open. You just take a book and return it when you are finished reading it. A volunteer goes in once a week and puts them back on the shelves.

The American Legion is an active part of the Lakeside community. It has something for everyone. I hope you will check it out. Their breakfasts are delicious and their homemade biscuits are not to be missed. The people involved in the Legion are friendly. It is a great place to visit.

17 thoughts on “The American Legion Post Number 7 in Chapala”