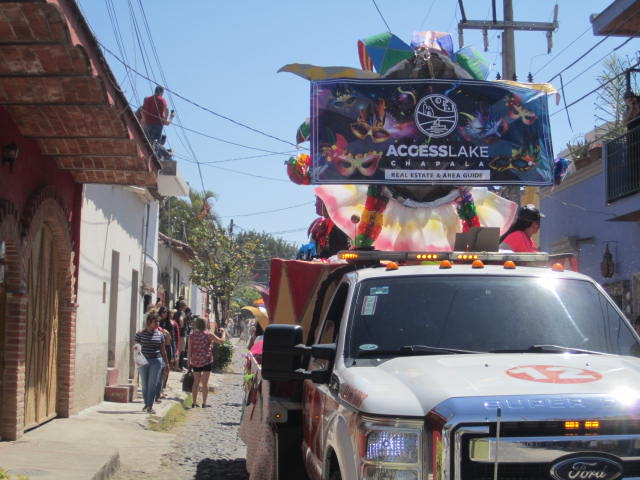 This year, the Mardi Gras parade was on March 5th, Tuesday.  It is always on a Tuesday, the day before Lent. Called Fat Tuesday. It is big celebration before a time of fasting, praying and and sober reflection. The Ajijic parade started on Revolution Street, went down Constution to Six Corners and back to the plaza. There were crowds lining the streets all the way.

Access Lake Chapala Real Estate had the best float in the parade this year.  (In my opinion). Below is a photo of the court gestures and clowns. Great costumes .

I was relieved that they weren’t into throwing flour at the crowd, instead they threw confetti.

I took the above photo of these two children before the parade started. Later on, there was chaos in the streets and it would have been impossible to photograph them without flour on their beautiful outfits. Calm before the storm.

Above is a photo of the boys running in front of the Sayacas at the beginning of the parade. They are running away from being floured. If they didn’t get floured, they ran back to where it was being thrown and ran away again. The whole point was to get floured but to pretend that they didn’t want it.

The boy in the above photo got a face full of flour. Maybe it wasn’t the point to get floured because he doesn’t look very happy. Who knows what boys want. Or what they pretend to want or not want. I don’t.

They were dancing after their initial onslaught of flour. The man in front in the brown jacket and mask is a Sayaco. The Sayacos are men who  dress like old men, wear masks and long beards. Notice the tree at the right of the photo. I was trying to hide behind it to keep from getting floured. Protecting my camera. Didn’t work. I got floured.

The little girl in the photo above had gotten floured but she was ignoring it.  All in good fun.  I doubt if anyone managed to get away from this parade without getting floured.

The float above was for a gym. You can see how the air is white with flour. Not only did they throw it, they also pulled some young women up onto the truck so they could cover their entire bodies with flour.

Float. There is a lot of confusion in the above photo but look closely at what they were doing. One girl was being pulled up on the float and others behind her were being rolled in flour.

So far, no one was brave enough to try riding the bull in the above photo. Last year I saw several people get thrown off of it. The man pushing it had no mercy. Maybe people remembered what happened last year.

The float in the above photo was a giant big beaked bird, surrounded by men wearing beaked masks. You can see the large basket of flour that is refilling the bags that the men carried.

The boy in the above photo managed to get enough flour on him to bake a cake. But he seems proud.

More Sayacas.  So many Sayacas in the parade this year. The one above is scary. You can see a Sayaco in the background on the left.

The sweet little girl’s in the above photo do not fit into the Sayacas profile but they were with a group of the Sayacas. Maybe the definition has expanded to include women, little girls and men. Just too much fun not to allow the real females to be part of it. If so, where are their bags of flour?

I loved this expat with his own female costume of a printed T shirt that looked like a sexy woman. An expat Sayaca. I didn’t understand the meaning of the kitchen prongs. Maybe to chase away the Sayacas throwing flour?

What is a parade without dancing horses? Maybe even a laughing horse.

There were many horses in this parade. A man with a shovel and wheel barrow was following along after them.

The man who lived in the house in the above photo kindly set a ladder up so people on the street could go up and see the parade from his roof.  Besides having a better view, they could be safe from getting floured.

The  little girl and in the above photo was sitting two blocks from the parade route. It she was prepared to participate with her bag of confetti. Easter is April 21st this year. Happy Lent everyone. If you are in town during Mardi Gras next year, don’t miss the parade. It is a lot of fun.