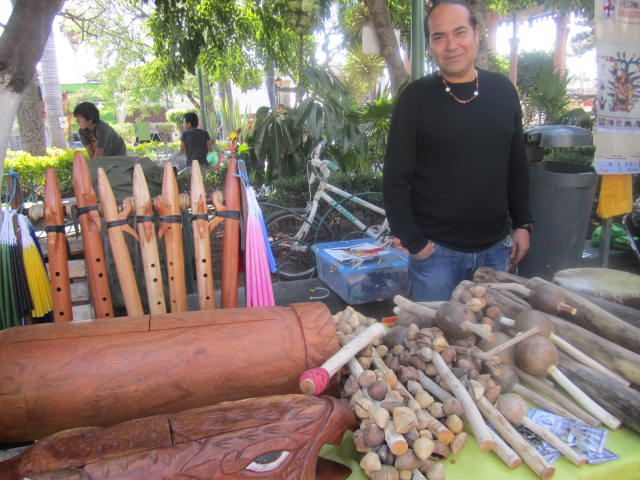 The Sangre Viva Festival was held in the Ajijic Plaza and some things also took place on the Ajijic malecon from Friday, January 26, 2018 through Sunday, January 28th, 2018.  Sangre Viva, literally means Blood Live. Interesting name for a festival. It was created to celebrate the PreHispanic culture.

There were many things happening during these three days. I only went to the afternoon events in the plaza on Saturday. But there were lectures all three days. Many beautiful craft stalls were set up in the plaza. In the evenings there were performances; dancing, different styles of music, and even a movie.

There was an outside children’s art class and also later on in the day they had a chance to make something out of clay. Check out the painting that the teacher is holding up for the class. It is the one the little boy was proudly showing me. Now wonder he was proud. He received praise from the teacher and all the students for his picture. Priceless! Both the painting and the praise.

Above is a photo of one of the organizers of the event. Carlos A. Paz Rubio. He and the director of the cultural center in Ajijic, Alberto Munoz, worked together on it. Alberto wasn’t around when I was there so I didn’t get his photo. Carlos started the festival five years ago and has been in charge of it all five years.

The above photo was taken near the entrance to the craft stalls. On the left you can see part of the art class for the children. It was a sunny afternoon and people were enjoying the plaza. Weekends are always busy on the plaza.

Above are some ancient symbols. Inside the Cultural Center there’s was an exhibit of many more symbols. Carlos told me that there are over a hundred different indigent cultures in Mexico. Each of these cultures has it’s own language, dress, and customs.

There are also another hundred cultures that only speak partial languages. Ninety percent of the Mexicans in Mexico are from indigent cultures. So, most of the people that you deal with on the streets, selling their goods, live among their own cultures, outside of the cities. They speak three languages; Their own language, Spanish, and English.

The photo above is an exhibit inside the cultural center of the symbols of PreHispanic languages.

Unfortunately, there were no performances on the stage while I was at the plaza but I did get a photo of some of the dancers. The man in the blue t-shirt is organizing a similar event in Guanajuato the third week of July.

There was one small musical performance off the stage. They were selling their CDs.

Above are handmade drums, waiting for the evening performance of dancers.

The man in the photo above made those musical instruments. On the far left of the photo are two drums. The bottom drum looks like an animal. Above that is another long drum and then the flutes.

The Huichol art works are some of my favorite. The Huichol in the photo above was proud of his heritage. He is wearing a Huichol hat and he is surrounded by their art works.

Behind him are large yarn paintings. (These take over a month to make). In front are the beaded ceremonial bowls. And to the left of him are cloth dolls. Also, above him are the traditional bags that the men carry.

I doubt if a Chinese checkerboard was in Mexico during PreHispanic times. But it was a beautiful handmade work of art.

There were many speciality items. This stand focused on just onyx pieces.

The stand in the above photo only had jewelry made out of feathers. I loved the necklaces but couldn’t imagine wearing one. They were too delicate to be worn.  They were more like works of art than jewelry. I was impressed. The artist is in the photo, wearing a shirt made with birds embroidered on it.

I love the Amber jewelry. Some of the necklaces were very intricately made with string and many knots. (No telling how long those take to make.)

The food looked and smelled delicious. I had already eaten so I didn’t buy any. But there was a line of people waiting for plates.

The canes were also popular items. Many expats here are elderly and they like to have speciality canes. These had animal handles.

Above is a photo from the show that is currently on the plaza. I don’t know what years they were taken. But it was interesting to see what it used to look like here. What a lot of changes.

The young woman in the above photo had made many lovely bird paintings. I liked her hair piece too. It was made out of feathers.

The man in the above photo can be seen on the streets of Ajijic just about every day. He sells well made baskets from his village. I have learned a lot from this festival. And now, when I see someone walking around town with something to sell, I will think about all the people in his or her village who made those objects. And people who are dependent on that salesperson for their livelihoods. Why squabble over the prices?

Although the photo exhibit is not PreHispanic or part of the festival, I found it interesting to compare what Ajijic was like not long ago to what it is like now. What a lot of changes have taken place here in such a short amount of time.

It is still Sunday afternoon and I am going to finish this article and walk back to the festival. Maybe I will buy some things at the stalls and not concern myself with the prices.