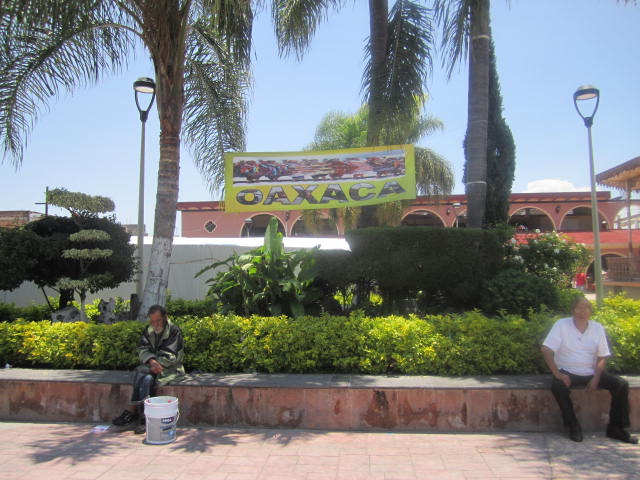 There are not many festivals in this area during the rainy season so I was excited to see the flyer about a festival in Chapala. The Oaxaca Festival. Running from July 27th through August 8th. It looked like a lot of activities were happening and Sunday was their biggest day. I took the bus to Chapala and was disappointed. There were only a few stalls in the plaza. I didn’t see any craft demonstrations or folk dancers but it was still early in the afternoon.

I can’t tell you how many festivals I have chased after, only to find that there wasn’t enough to write about. This was another one. But it was also the blowout weekend for  children, almost time for them to go back to school. Ajijic had a lot of people visiting and I was guessing Chapala would be no different. I was right about that. But the crowds were at the malecon, not the plaza.

Above is the festival sign and two men resting on the low wall by the bus stop. I could see right away that not much was happening there.

The above woman from Oaxaca was selling candy. She had one child customer. She might not have sold much candy but she was quite an advertisement for the beauty of women in Oaxaca.

Above was a chocolate booth. They also sold Mole.

Oaxaca is famous for their moles. I have read that one mole sauce can take over seventy different ingredients and many hours to make.

The man in the above booth was selling jewelry and beautiful hand embroidered blouses. His picture was in the Guadalajara reporter as an advertisement for the festival. He looked contented, even though I didn’t see any customers at his booth. Maybe he was basking in his fame.

The woman in the booth above was selling jewelry and Alebrijes. Alebrijes are the little magical animals. They are handmade out of wood and brightly painted. There are two towns in Oaxaca that specialize in these animals. I hope to make it to Oaxaca in December and I want to go to one of them, San Martin Tilcajete. The other town is La Union Tejalapan. Sometimes the Alebrijes are made out of paper mache.

The man in the above photo was selling jewelry. He didn’t seem to mind that he didn’t have customers when I was there. He gave me two thumbs up.

The man in booth in the photo above was selling honey and everything made out of honey.

The man with his arms out for my photo was just goofing off. I guess he was bored. From what I could tell about the people from Oaxaca, I would say they are a relaxed and friendly bunch. Since there were several days of the festival, maybe more people shopped at other times. I hope so. It is a long journey to make.

The only booth that had a lot of customers was the ice cream booth.  It was too hot to do much shopping.

Since there were so few customers, the man who made leather was working on one of his leather projects. He didn’t even bother to look up at me as he worked.

You can see from the above photo that the Chapala Plaza was very quiet. Since I didn’t see any folk dancers or craft demonstrations, I decided to check out the Malecon. Maybe they were there.

I found all the people. They were at the malecon. I saw several bands playing and so many ice cream sellers that I couldn’t count them all. They were always crowded.

Above is the area where I expected to see the craft demonstrations and folk dancers. Unfortunately, I was a little too early. And if they started on Mexican time, It wouldn’t have been for many more hours before they started. I saw all the crowds and realized that I woudn’t be able to get many photos even if I hung around. Too many people would have been in front of me. So I walked on down the malecon.

People often ask me if it is okay to swim in the lake here. Take a look at the photo above. The Mexicans have no fear of this water. I often see children swimming in the lake during holidays. It was very hot and I wanted to get in there too. I wasn’t wearing a bathing suit so I walked on. I was on a mission to get some photos of this end of the summer holiday.

Above is one of the many ice cream stands. They didn’t have any problems with getting customers. Lines were at all of them.

Above is a photo of the area at the entrance to the malecon. There are lots of trees and a fountain and it is a popular part of the malecon.

I liked seeing the man taking a photo of his son or maybe it was his grandson on the pony. That pony was barely moving. He had no fears of the boy falling off.

There were two horses under the shade trees. They were popular with the crowd, especially with that pretty young woman.

I have seen several of these Freisian horses in the Lake Chapala area. I am always impressed with their beauty. I don’t know if he was selling rides on it or not. I walked on to see what else was happening. I was getting very hot and tired.

The above view of the entrance to the wharf is what brought me to live here. I saw a similar photo online over ten years ago and it made the decision for me. I wanted to be in such a beautiful place. So I am sharing this view with you. Maybe it will convince you to make the same decision.

I liked seeing people posing with the above sculpture. It is so majestic.

But the above sculpture was more popular with the crowds. It was added  just a few years ago to the malecon.

Now you know why I wrote that the Chapala sculpture was more popular. You see the line in the above photo. It is a line of people waiting to have their pictures taken with the letters. CHAPALA.

Above is a photo of the double decker tour bus. Usually I see it parked but during the weekend it was filled with tourists and slowly driving around town. I have never ridden it but when I lived in Lower La Floresta in Ajijic, I saw it there. I don’t know where else it goes. But it looks like fun, especially on the top deck where it must have been cooler.

I was walking back to the bus stop to go home and I saw these two little girls on the sidewalk in front of a restaurant. I was taking their picture and the girl on the right waved at me. See the blur of her left hand. I am surprised that she had enough energy to do that.  Their parents were watching through the open window inside the restaurant.

I guess these girls were too exhausted to join them inside. It is my favorite picture of the day because that is exactly how I was feeling. I wanted to do the same thing. It was so hot and I had been walking through crowds of people for a couple of hours. But I enjoyed the outing, even though I did not come across the folk dancers or demonstrations of crafts.

When I finally made it back to the Plaza, I was told that the dancing wouldn’t happen for several more hours and back at the malecon. I couldn’t face waiting around or walking back.

I hope you enjoyed the photos I did manage to get.

6 thoughts on “The Oaxaca Festival in Chapala”