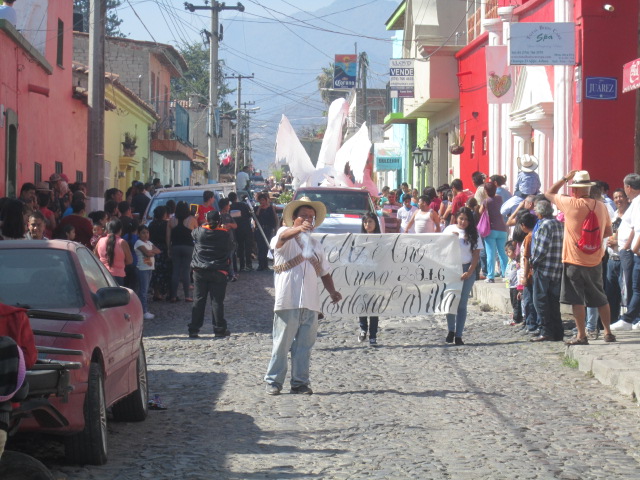 The New Year’s Day parade was fun. I went into town around nine in the morning. I thought the parade started in the morning but it didn’t start until two in the afternoon.  The town was practically deserted in the morning until around noon and then it got crowded. There was more traffic here than I had ever seen. Traffic was at a standstill. Lots of people were waiting for the parade too.

I loved the bird float. That took a lot of work and time to make. Check out the detail of the wings.

I like to photograph the crowd. I took this one in a lull in the parade. People looking in both directions. Waiting, and waiting. It was a day of waiting….

I liked seeing the child with angel wings behind the old man. Maybe the man represented Father Time.

This huge guitar had writing on it. I didn’t get a chance to read what was written on it but I believe it was of future music events here.

Some of the people walking in the parade looked tired. It must have been hard to walk in a parade after a night of staying up late and partying.

I wonder if this is a first parade for the little boy in the photo below. He seems anxious about what is going on.

People in the next two floats were having fun dancing.

I couldn’t figure out the signicance of the old sewing machine in the float. Have any ideas?

The man in the photo below seems to be pleading for something. I don’t know what. Maybe more beer?

The two girls with him have their own beers. Oh, to be young again and be able to party all night and the next day too.

When I posted the photo below I noticed that the band members were all children. I missed it until now. The man was singing up a storm.

The Simpson family showed up to be in the parade. Hope they enjoyed themselves. I think so. Bart’s Simpson is most likely drinking a beer out of that cup. His beer bottle is on the floor below.

The candy land float was very creative. They were throwing candy into the crowd.

Is the person in the photo below a man? Or a woman?

So we are almost at the end of the parade. Only the band and the horses come next. The band was small and there were only two horses. Must have been lots of partying going on New Year’s Eve with the Cowboys and the musicians.

And another Old Man Time. The grandpa, Abuelito. Little grandpa.

Last but not least, the two Cowboys with their horses. No dancing horses in this parade.

If you are ever in Ajijic on New Year’s Day, don’t miss the parade. But don’t go too early or else you will be sitting on a street corner for several hours. HAPPY NEW YEAR EVERYONE.