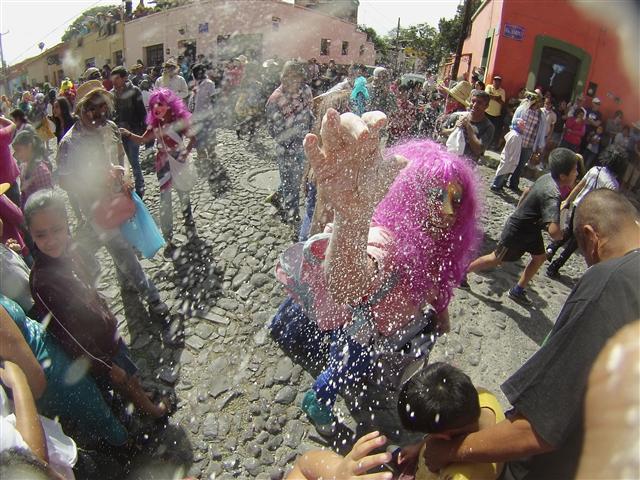 This is my third year of writing about the Fat Tuesday parade. Unfortunately, I was too sick to get out of my house to see it. My friend Ramon took these photos for me with his wide angle lens. The lens gives an interesting perspective.  Since I didn’t take these photos, I can’t comment much on them but I will give you some background information on the Fat Tuesday Parade. I hope next year I will not have to miss this parade. It is my favorite one of the year.

Sayaca is a name given to men who dress up like women for the parades. They usually make their own masks. They put balloons in their dresses for breasts, although the man in the photo above did not do that. (Or maybe that was a woman and not a Sayaca. You make a guess.) Anyway, the Sayacas wear dresses and wigs and carry flour in bags on their shoulders. If they get near you, you get floured. The children love this tradition. Before the parade, there are always many children, mostly boys, running ahead of the Sayacas. Some of these boys may have dreams of becoming Sayacas themselves when they grow up. Half of the Sayacas dress up like old men. They too usually wear masks of their own making. And they dance with the Sayacas who pretend to be women. It is great fun.

In the Mardi Gras parades in different places around the world, especially New Orleans, people throw beads. They are usually made out of plastic or aluminum. They are in three different colors; purple which represents justice, green for faith and gold for power. But in Ajijic they throw flour. This tradition started many years ago in Europe after the long winter freeze. Flour was thrown into the fields in celebration of the people who survived the winter and hopes for good crops in the future.  Not that we have any winter freezes here in Ajijic but flour is a lot more fun than beads. It makes such a mess.

The parade was well underway when this float on the back of the tow truck came by. I can tell that by how much flour is on the bystanders. The man in the lower right of the photo doesn’t have much skin showing. He is more like a dough boy.

Parades are great ways for people to advertise their businesses and events. The Chili Cook-Off is another big event in town and it is coming up very soon. February 27th, 28th and March 1st. It will again be held at Tobolandia. This will be the 37th Annual Chili Cook-Off. I hope I don’t miss this!

People ride in the parade on tow trucks, cars, horses, sometimes donkeys and cows, bicycles and even golf carts. Ride in anything you wish but ride in the parade if you can. Another interesting fact about the Mardi Gras parade: It was officially put on the Gregorian Calendar in 1582 by Pope Gregory XIII.  That is a lot of years of parading!

I forgot to mention pickup trucks and vans. If you look closely at the third vehicle back you might see an ambulance. Another fact about the Mardi Gras parade: Another word for it besides Fat Tuesday Parade is Strove Tuesday. Strove comes from the word Strive which means CONFESS. This is what the Catholics do prior to the forty days of Lent. Confess and then let it all hang out until Wednesday Morning, the beginning of Lent.

Another photo of the end of the world. Just joking. I mean the end of the parade….  Looks like the people in the lower right of the above photo have had enough of being floured. They are racing away before the last float comes raining flour down on them.

I see  that the man driving the golf cart in the above photo did not manage to avoid getting floured. Maybe it was by the Sayaca who is standing beside the golf carts on the right side of the photo. Looks like her balloons are starting to fall. This is coming towards the end of the parade. It started on Constitution and went down Ocampo to Six Corners and then went back to the Plaza. This shot was taken just past the plaza.

The photo above was taken after the parade. It is in the plaza. I don’t know why the man is dressed in the King Tut hat. Fat Tuesday is a day for people to live out their fantasies. Maybe this was his fantasy. Check out the white hair on the people in the left front of the photo. That is flour, not old age.

For obvious reasons, the horses always come last in a parade and this one was no exception. They are my favorite part of the parade, especially when they are dancing. These look like before parade shots.

Another nice photo of some of the horses.  There is a large horse and cowboy community in this area. I am beginning to recognize some of the horses and riders. I didn’t see any photos of the bands. I am sure there were at least one or two bands in this parade. I will have to talk to the photographer about that slip up.  Otherwise, he did a great job.   Thank you Ramon! Photos are better than not seeing it at all.

I love this photo of the baby in a red wig. She looks like a doll instead of a real baby. She managed to avoid the flouring. But the man to the left didn’t. He doesn’t look too happy with the situation. Maybe it was time for him to go home and wash up. Another Fat Tuesday parade has come to an end. It sure looked like fun in the photos. Wish I could have made it there. Next year I hope to be there. And if you are in town, don’t miss it. You won’t regret it, unless you just hate having flour in your hair.

One last fact: Fat Tuesday is also known as Pancake Day. Don’t ask me why. I don’t know.