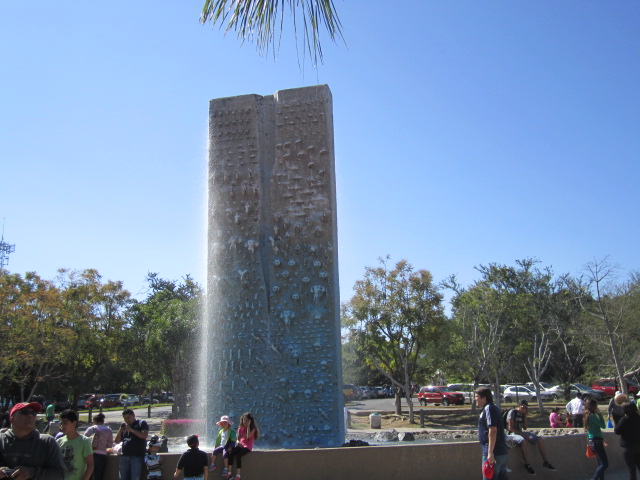 The Guadalajara zoo is at the edge of town, next to the Huentitan Canyon which is a natural park.   The cost is sixty pesos up to two hundred pesos, depending on what you want to do there. If you want to go on everything that takes people around to see the animals, the cost is two hundred pesos. That includes the sky ride, the safari truck, the train, plus entrance to the aquarium. There may have been other things that we missed. I know we missed the snakes. Not too unhappy about that.

There are many statues at the zoo. Some of them are in water or have water shooting out of them. Some are with the animals. The zoo grounds are beautiful and clean. I have never been to another zoo that was as clean as this one and during the entire time we were there, I didn’t smell any animals. They are kept in large areas. Not so much like cages as natural areas, similar to where the various animals lived in the wild.  None of the animals seemed crowded or enclosed. It was more like the people were in the caged off areas and the animals roamed free. The zoo opened in 1988 and is considered to be the most important zoo in Latin America.

I liked the monkey statues at the zoo entrance. The zoo has 2,200 animals, 360 different species. I know I missed many of them. Too much to see, too little time. I think maybe two days at the zoo would have been better.

I liked the house that was made for the hippopotamus. I would say he or she seemed happy but how can you tell if a hippo is happy?

There were many monkeys. The young woman is hand feeding them. I liked seeing the babies riding on their mother’s backs.

When we got on this safari truck we were each given a handful of grain. We weren’t told what it was for. We learned halfway through the ride when the driver stopped for the Giraffes. They immediately came over to get fed. They knew the drill. This was a special treat for the children.

Some of the larger animals can only be seen from one of the rides. If you visit the zoo, they are well worth the extra money.

I liked seeing the elephants. It was a warm day and the water looked very refreshing for them. They also had lots of shade.

Above is a photo of the white lions. I did not see the white Bengal tigers. There are many endangered species at the zoo, including Bengal Tigers, Jaguars, Lions, Leopards (Black Panther). I missed some of them. I need to take another trip there to see all the things that I missed on this first trip.

This deer was relaxing under the shade of a tree. There were many animals in the zoo that we often see in nature. I saw peacocks, turtles, turkeys, ducks, donkeys and different species of birds. Again, I missed the snakes. Fortunately. I don’t like snakes.

There are many different species of birds in cages. In the larger cages, people can walk through and visit with them first hand.

The bird in the above photo was following the man through the bird sanctuary. I guess the birds and animals get bored and are as interested in us as we are in them. The man is smiling. I think he got a kick out of being followed by a bird.

Each ride takes people through a different area of the zoo. I liked the train.  The girl standing in front welcomed people aboard.

What I liked most about the train ride was the tour guide. She was very young and she had such poise as she talked about the animals. Of course, it was all in Spanish and I didn’t understand a word but it was her spirit that I admired. I love the expression on her face in this photo. Her parents must be proud of her.  I imagine jobs are the zoo are highly prized by young people in Guadalajara. Maybe one day this young girl will be a television announcer.

I took the photo of the buffaloes from the sky ride. It took me half the ride to get the courage to reach into my purse and take out my camera. Otherwise, I was clinging to the bar that went across me. (I was sure these were buffaloes but now I don’t know. They could be bison. They are very similar. Guess you will have to visit the zoo to find the answer for yourself. And I will have to make another trip.)

The photo above is the turn around point for the sky ride. In the distance is the Huentitan Canyon park. The zoo is trying to preserve this canyon.

The sky ride goes the entire length of the zoo and back. It was beautiful but for me, scary. I imagined sliding off and into the lion’s area. Or even worse, watching one of the small children sliding off. No one else was worried. Okay, I did see a few children hiding their eyes. It was the best ride and the scariest ride in the zoo for me.

The stingray was in a tank at the entrance of the Aquarium. This was another example of curiosity about the visitors. The stingray followed me as I walked around his pool and he came as close to me as he could. As if he was saying hello to me. Or maybe it was a she. What fun.

I enjoyed walking around in the aquarium building and watching people was almost as fun as watching the fish in the exhibits.

Angel fish are my favorite.  There were many different fishes in the aquarium tanks.

People watching is fun for me. I took this photo because I enjoyed the people more than the fish inside the tank.

The jelly fish are cultured in the lab. It is the first jelly fish culture lab in this part of the world.

There were several kangaroos near the aquarium. They were all relaxing in the shade.

These last two photos were taken at the end of the exhibits, on the way out. There are many beautiful areas in the zoo where people can stop and rest or even have picnics.There are also some small food stands.  This is a people friendly and animal friendly place.

Next time I come here I am gong to spend more time in this area. It is lovely with the flowers and waterfalls. I can’t say enough about how beautiful it is at this zoo. I didn’t want to visit it because I don’t like to see unhappy animals in cages but this zoo is different. The animals seemed contented. I highly recommend a visit to the Guadalajara Zoo. You won’t be disappointed.

3 thoughts on “Day trip from Ajijic to the Guadalajara Zoo”