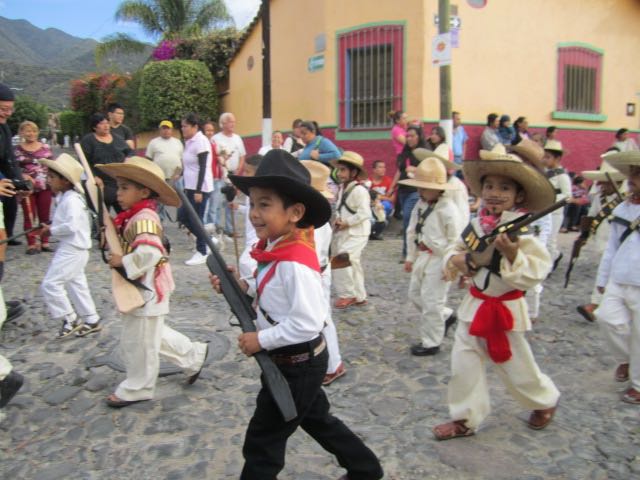 This parade must be one of the the most liked by the Mexican children. It is their parade and they get to play the rebels, similar to the children in the United States who enjoy playing Cowboys and Indians.   This first group of boys dressed like rebels, was an inspiration to the crowd. They showed so much enthusiasm!  What fun!

The girls came along after the boys. Some of them had their baby dolls strapped on with their rebosos. Some were carrying baskets of pretend food.

Then the boys fell down. Wounded in battle. This looked like great fun for both the boys and the girls. They girls ran over to their rescue, pretending to nurse their wounds. Notice the two boys peaking out through their fingers, watching the scene. I saw a lot of smiling going on, both with the girls and the boys. What could be more fun?

It wasn’t fun in reality. The war lasted from 1910 through 1920.  Ten years of pain and suffering.  The holiday is always the third Monday in November. It is a day off. But there are also celebrations going on all week long, especially on November 20th. I was going to write about the history but I got confused with all the facts and ins and outs. Much chaos was going on those years. You can google it if you wish. I just want to enjoy the parade.

Most of the parade was made up of marching children. The children in the above photo were making music with those strange upward facing horns.

I liked seeing the girls doing all the drumming in this part of the parade.  It must be fun to pretend to be a nurse and take care of the little boys but I am guessing that these girls enjoyed drumming just as much. Or more.

The Mexican flag is White, Green and Red. These young people are doing interesting moves with the flag’s colors. The Mexican flag was created in 1821. The three colors represent three items in the peace treaty between the Royalists and the Insurgents. The Eagle in the middle is an Aztec symbol from mythology.

These young people were using the red, silver and blue disks for their performance. I do not know the significance of the three colors. Maybe they are their school colors? Whatever the meaning of the colors, it was a very interesting display of coordination and energy on the part of the children.

This group of young people was waving around red scarves as they marched.  One of the things that I enjoy about the Mexican culture is their creativity. Simple things like disks, scarves and hoops can be used to make interesting performances.

The girls in their beautiful dresses would stop every block and do a dance. A man was in a car drove in front of them with a huge speaker in the trunk and music blasting out for them.

The children in the above photo were using the hoops for their performance. They looked like hula hoops decorated with colored ribbons.

The above scene was of a race. The people in the bright green t-shirts chose two children from the crowd watching from the sidewalk to run the race. The winner won a bright green rubber ball. The children in the crowd loved to be able to participate in the parade and also have a chance of winning a ball. This may have been my favorite part of the parade. Look at the smiles on the faces of those two runners. This race was repeated every block or so.

A soccer team is in the above photo. Check out the bright colors of their shoes. Florescent!  This was a happy looking group too. Florescent smiles.

I am glad that little boy wasn’t pointing a water gun at me. I would have been shot and very wet. This was a float filled with children pretending to be insurgents, pointing their toy guns at the crowd.

I liked the above float because the little girls looked so happy and gentle. With all that gun pointing going on, it was such a contrast to see these girls doing feminine things. Pretending to cook, pretending to paint pottery, fixing each hair styles, etc

The elderly Mexican women also walked in the parade. They walked so fast that I almost didn’t get any photos of them. This is the only one I managed to get. The woman in the photo is carrying a toy gun. I like the expression on her face. She recognizes the significance of the Revolution even though the children mostly see it as a game.

I wonder which was harder to ride, the pony or the donkey? Looks like the donkey is in the lead. Check out the little boy’s mustache.

A float filled with little revolutionaries. The girls seem to be having more fun than the boys. I love the expressions on the faces of the three boys at the far right. Almost as if they are expecting to be put before a firing squad at the end of the parade.

And what would a parade be without a float with pretty girls on it? I am guessing that their time of admiration on that float will remain in their memories far into their waning years. We are only young once. It is fun to see them basking in their youth and beauty.

And now we come to the end of the parade and the horses. The Escaramuza girls arrive first with their beautiful brightly colored skirts. These girls are highly skilled horsewomen and if you have never seen any of these performances, you don’t know what you are missing. They race their horses towards each other, creating interesting patterns as they pass.    It take great skill not to let the horses run into each other. And the girls do all this sidesaddle!

This band got neglected in my earlier photos. I certainly don’t want to overlook them. I can imagine that the man with the huge drum and the one with the tuba were extremely tired at the end of the parade.

Here are the mothers with their daughters riding in their laps. I love the beautiful dresses. These little girls most likely will grow up to become Escaramuza riders. Maybe their fearlessness comes from riding since they were just old enough to crawl.

The association of the Charros arrived with their sign painted on some kind of animal skin.  They were a somber looking group.

More Charros came next. I always enjoy seeing the cowboys and horses. Sometimes a horse will dance. They are very close to each other but the cowboys are very skilled and never let them bump into each other. Unless, of course, the Charro has had too much to drink. Then strange things are likely to happen.

The last photo is of a group of women riders. They had such beautiful long hair.  They all were very skilled with their horses. There is a large horse community in Ajijic. I see the same riders in all the parades. Sometimes I see them having parties by the lake.  They stick together and help each other in times of need. This is one of the many advantages of a small community.  Group cohesion.  Are you a horse person?  If so, I believe that you would love this area and the people who are involved with horses. I had a friend who loved horses. She rented one for a month here and she was welcomed by the other horse people here. She had a great time with them.  The only sad part was having to leave her horse at the end of the month.