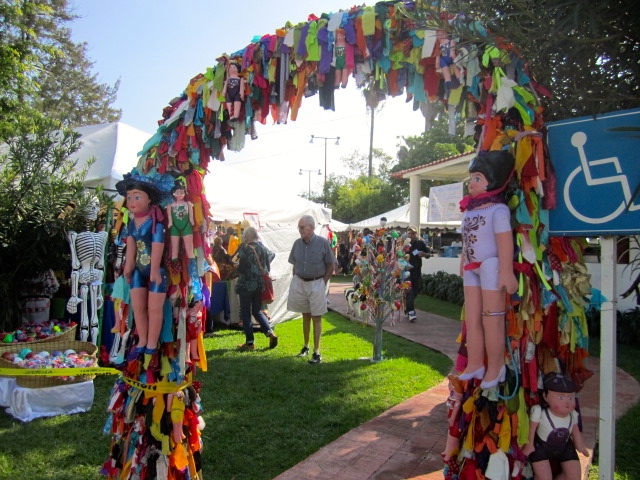 The thirteenth annual Feria Maestros del Arte was held at the Chapala Yacht Club on November 14th, 15th, and 16th. It was from ten a.m. to five p.m. (Ten to four on Sunday) and the entrance fee was just fifty pesos. I went the first two days and had a wonderful time. There were  many beautiful crafts from all over Mexico. I could only afford two small bowls. But for people who wanted to buy some of the more interesting things, there was a free van parked out front that would take them to the ATM machine in town and back again.

I picked up a map on my way in and saw that there were 74 tables. Some of the tables were co operatives of many different crafts people. Everything was professionally arranged and all the vendors were friendly and happy to pose for me.

There were hundreds of skeletons and Catrina dolls at this art show.  They were made out of many different materials, from paper to cloth to ceramic. Take your pick. This one appeared to be guarding the door.

This is the Feria Mission Statement:  To preserve and promote Mexican indigenous & folk art. We help preserve these art forms & the culture that produces them by providing the artists a venue to sell their work to galleries, collectors & museums. In collaboration with Mexican government agencies, we promote regional & international awareness to the plight of these endangered arts.

I took hundreds of photos in the two days that I was there. Many of them were of the crafts people. Unfortunately, there isn’t room on this site to show them all. I had to cut them down to twenty four. I missed some names. I apologize to all the wonderful crafts people and beautiful crafts that I could not put on this site or did not name.

If you would like to try to find some of the crafts people, you can look online. Each one is listed there: www.mexicoartshow.com  You will also learn more about the Feria. If you want to be part of next year’s Feria, there is information. And if you would like to host a crafts person, you will also find what you need to know on that site. It has a lot of very valuable information on the show and next year’s show. Above is a photo of Manuel Reyes, potter, from Oaxaca.

Every day there was live entertainment, as if browsing through the stands wasn’t entertainment enough. I listened to a jazz sax player. I watched two fashion shows. I listened to the female mariachi group. I missed many more performances. Wish I had two bodies so I could be in two places at once.

These musicians are from Chapala, Recuerdos de mi Mexico, Musica Popular Mexicana. The director is Emmanuel Miranda. They were very good. If you are interested in hiring them, call: 33 35 0789 08 or e mail recuerdosdemimexico@hotmail.com

The artist below, Francisco Gutierrez did the jewelery in the photo above. He lives in Oaxaca. I could not get him to smile.  I just looked on the www.mexicoartshow.com site for the various kinds of crafts that were on display. There were 5 Alebrijes (Figurines) booths, 1 Bone booth, 4 Ceramic Figurines booths, 15 Ceramic booths, 18 Clothing/textiles booths, 1 Day of the Dead booth, 1 Women’s prison project booth, 4 fiber and corn husk booths, 2 mask booths, 1 furniture co op booth, 1 Huichol center for cultural survival and traditional arts booth, 7 jewelery booths, 2 Lacquer ware booths,  2 painting booths, 1 paper booth, 6 toy booths, 3 weaving and rug booths, and 2 wood booths. Hope I didn’t miss anyone.

As you can see from the list, the greatest number of booths were of ceramics and clothing and textiles. Below is the raffle booth. They had the prizes on display.

There were raffles going on during the day and many beautiful crafts were given away. But you can’t win if you don’t buy at least one ticket.

Above is a photo of one of the textile booths. Teofila Servin is the woman’s name in the photo. She is from Michoacan.

Ceramic Jaguars were everywhere, big ones, little ones, mean looking ones and sweet looking ones. They were made by Juana Gomez Ramirez from Chiapas. It is the women who make the pottery. Sometimes the men help to paint the pieces.

These two women have their hands full with a huge Jaguar. I wonder where they are going to put it. Maybe at their front door as a guard.  It looks real and I bet it would be very scary after dark.

These sculptures were created by Zeny Fuentes Mendez. He is from Oaxaca.

All of the dolls in the above photo were made by women who are in prison. They were all beautiful. If you are interested in buying any of these dollar or would like to know more about this project, please contact them at:www.prisondolls.com     As with many of the other booths, if you look on the web site: wwwmexicoartshow.com  and find the artist you want you will see more photos of their work.

I did not get the name of the woman who is doing the weaving. She has found a nice, quiet spot for it. The Chapala Yacht Club is large enough to handle all of the booths and there is still room for the performances and food booths and even places under shady trees for relaxing.

I love the Huichol Yarn paintings. There is a lot of information about the Huichols and their art on the www.mexicoartshow.com site. And more photos of their beautiful work. If you would like to contact them please send e mail to: Huicholcenter@juno.com

Above was the Tequila booth. I liked that one. He was giving out free samples. Tequila Sandy Y Daniel. Above is a photo of the owner, Oscar Daniel Ruiz Gallegos. He is from Jalisco. He was very proud of his tequilas, telling me of all the awards he has won with it.

I did not get this man’s name. I did not want to bother him while he was hopefully making a sale of one of his beautiful rugs.

I loved the Catrina dolls, especially since I recently saw the larger than life ones on the Chapala malecon. These Catrinas were were spectacular. Many hours of work went into making each one.

One fashion show was with some of the beautiful textiles that were in the various booths. The second show was to highlight the rebosas. You can see in the above photo how the women were wearing their bebosos (Shawls) in different ways.

There were some great food booths. I wanted to have something at each one of them but my stomach said no. These two women were fixing some Jewish food. It was all reasonably priced. One booth just had desserts. One booth served traditional Mexican food. One served hamburgers. One just sold drinks, both alcoholic and non alcoholic. There was no reason to go hungry.

I hated to see the weekend slip away from me. I decided to write this article instead of going back for a third time to the show. Just like when I wanted to eat a sample of everything, my body had other plans. I needed to stay home, rest, and write this article. No more temptations for this weekend. If you are in town during the next Feria Maestros del Artes, be sure to go see it. You will not be disappointed.