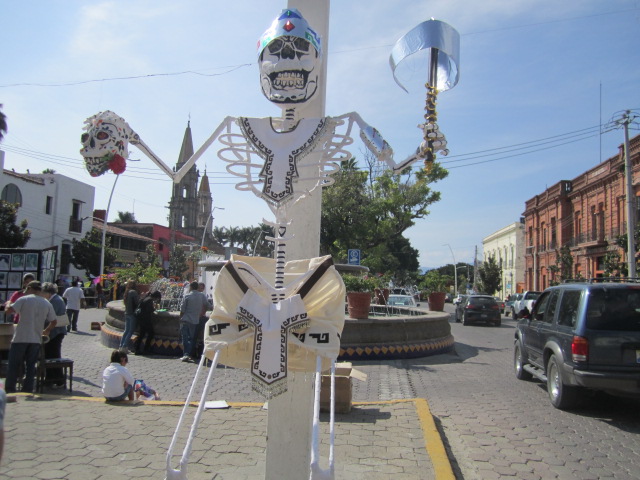 The Day of the Dead is one of the most popular holidays in Mexico. It celebrates the great circle of life–the passing of some and the birth of others. The dead are always remembered and kept alive in spirit in the hearts of Mexicans. Altars are put up on November 1st and 2nd. Sometimes these have been started weeks in advance and Mexicans put lots of thought and money into creating these altars. They are created to bring back their dead loved ones for a once a year special visit. People also buy flowers and wreaths and put them on the graves of their loved ones and they visit the graves during this time; play music, dance, eat and sing. Catrina Dolls are also an integral part of the Day of the Dead celebrations but I will go into them in the Catrina article.

Every year in Chapala a street is closed off so people can put up their altars. Mostly, they are done by the young people. They have fun visiting with each other and being creative. This year it was held close to the malecon.  I went on Sunday the 2nd to see them and most of them were not finished yet. Yet, I could see all the work that was going into making each one special and memorable.

The one in the above photo was very strange. It was not an alter in the traditional sense of the word. It just looked like a grave site. Most altars have at least two levels. Things that go on the altars are to help guide the dead loved ones back.

Here is another one that was not a traditional altar. It looked like a baby’s grave.  It had some of the traditional things on it. Marigold flowers, skull, and candles.

These are the traditional altars. Offerings, in Spanish the word is Ofrendas, are put on the altars. People put on the best that they can afford. They do not want their loved ones to be disappointed upon arriving at the altars. Marigolds are almost always on the altars or arched over the top and also on the bottom, often leading to the door of the house so the spirits can find their way, following the strong fragrance of the marigolds. The marigolds are called Cempasuhiti in Spanish and they symbolize death. Marigolds are seen everywhere during the Day of the Dead celebrations.

Food is put on the altars, especially the favorite food of the departed. Pan de muerto, bread of the dead, is on the altars. It is a symbol of the departed. Fresh fruit in season is on some of them.  The spirits don’t eat the food or drink the drinks. They absorb the essence of it and after the altars are down, the food is distributed to friends and family. But the things are tasteless because the dead have absorbed it all.

There is always a framed photo of the dead loved one at the top middle of the altar.  Salt is always present. It represents the continuance of life. In the above photo you can see that the cross is made out of rock salt.   Sugar skulls are on the altars. They are also given as gifts during this season.

The areas on the bottom of the altars are carefully and elaborately decorated. In the above photo, you can see the man is creating a skull out of colored sawdust. Also they use marigolds and other materials to make them interesting.

Some of the altars are made for famous people; actors, politicians, cowboys and there is always one for Freida Kahlo.

You can see in the above photo that a little path was created with candles along the sides to help guide the spirit to the altar.

In the above photo, the ground below the altar is much more elaborate than the altar itself. This one looks like it was created for a movie star. Notice the rock salt cross on the right side.

I do not know the significance of the crosses made out of marigolds at the entrance to the church. They were quite striking.

The young people were resting on the church steps after spending many hours working on the altars. The dogs of course are almost always resting. No working for them.

The altar in the above photo had several people on it.  Maybe it was a family altar. All the elements are there; salt cross, candles, marigolds, day of the dead bread in the center….

I liked this close up of a carefully done base of one of the altars. It is made out of red and blue colored sawdust. Lined with marigolds. Rock salt cross lined with candles. This must have taken a lot of patience to make.

Above is another altar that had much work put into the front part. I like the white hands inside the blue border. You can see that it takes quite a few people to make one altar.

Here is another very complicated and time consuming altar. The girl on the right looks tired.

Above is just a small section of the street scene. Around noon it started to get very crowded. This is a very popular event in Chapala.

Mirrors are often on the altars and bowls of water so they can clean up, wash themselves and sometimes there are soaps and razors.

The photo above is of the lower entrance of the altars. You can see a Catrina doll on the far left side of the photo.

Before going down to the altars, I visited the Chapala Plaza. There were many flower stands. Some of them only had artificial flowers. Some only had real flowers.  They were for the other part of these celebrations, visiting the cemeteries. They put the flowers on the graves of their loved ones. And also artificial wreaths which stay on all year.

The flowers in the above photo are all artificial. I went inside the plaza building and took this photo of a woman who was making a flower arrangement with real flowers. Flowers are everywhere during this time of the year.

Above is a photo of an outdoor stand selling artificial flower crosses and wreaths for people to put on the graves. I did not make it to any cemeteries this year. I will save that for next year. I also missed several parades. Too much to do. Too little time. Okay, to be honest, I have lots of time. I just don’t have enough energy to see and do everything that happens during this holiday. Come down and help me next year.