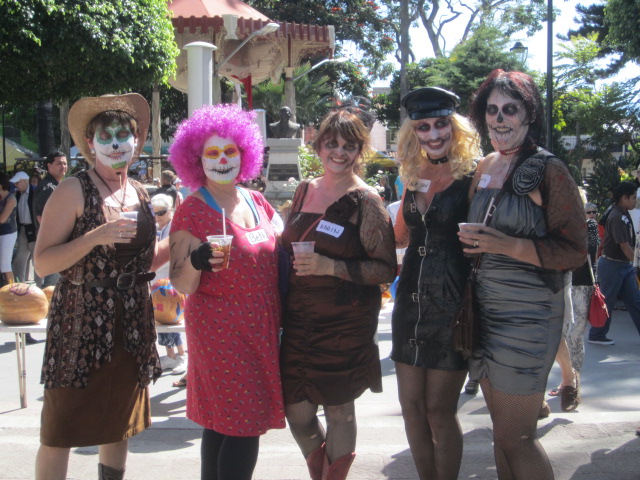 Saturday, October 26th, was a big day for Ajijic. There were several things happening in the Ajijic Plaza and the entire area was packed with participants and curious onlookers. The Michael Jackson Thriller Dance was one event. This is a worldwide dance to raise money for different charities. In Ajijic, it is for the Local Red Cross. People dressed in the zombie makeup and costumes were mixed in with the crowds before the dance. The children loved this event.

The women in the photo above were part of the zombie dancers. They were posing for another photographer but I jumped in and took one too. They were too cute to resist. Cute? Maybe that isn’t the right word.

Just before the zombie dance, all the participants gathered in the cultural center for a group photo. I love the expressions on all their faces. They had been practicing for weeks to get all the moves right.

The woman in the photo below was hamming it up before the dance but the little girl on the right was stealing her thunder. It is hard to resist a little girl dressed up like a zombie.

The photo below is the beginning of the zombie dance. They all start out on the ground and slowly get up and dance around. The zombie little girl is still holding her own with that deadpan expression.

Below is a photo of just a fraction of the onlookers. Because this year the dance was held in front of the small church instead of in the plaza, it was more difficult to see and photograph. People were practically climbing on top of each other to get good photos of it. Or else they were just holding their cameras over their heads and hoping for a good shot.

After the zombie dance, they all went in cars, trucks and golf carts to six corners. They did the dance again and came back to the plaza for another performance. I thought for sure someone was going to get run over, with everyone milling around in the street and between the cars. But it all turned out okay. People in Mexico are used to taking more chances than in the States. Things can get very exciting in big crowds with cars going everywhere, people running around, etc. Never a dull moment.

What was Santa doing with the Zombies? Was he making up a Christmas wish list for them?  That can’t have been a good thing.

As you can see by these two photos, the cars and trucks were packed with zombies. Fortunately, no one was in a hurry. They were stalled at the intersection for a long time.

I love the photo below of the three little girls in their zombie outfits and zombie painted faces.  They looked so serious as they watched the parade passing by.  The mothers in the background were keeping close eyes on them. Maybe the girls wanted to be in the parade too.

Several generations were standing together near the giant Catrina doll. This was at the corner of the plaza where the parade was passing by.

How about a free glass of tequila to get away from the craziness of the parade?

I wonder if the boy zombie in the photo below had gotten into that free tequila?

Many of the people at the plaza were involved in the craft show. They had no interest in the zombies on the loose.

Below is a photo of the Catrina dolls. My next article will be about these dolls. They are very popular this time of the year.

I saw some beautiful art and crafts at the outside stands. Below is a woman checking out one of the lovely handmade necklaces.

Some of the artists and craft people were working on their things as they waited for customers. Prices were reasonable and the work was excellent.

This was the first year of the pumpkin carving contest, sponsored by Diane Pearl.  It was a great success.  The money was being raised to pay for toys and art supplies for the children in the area at Christmas time.

There were some very creative carved pumpkins. Both children and adults participated in the carving. My favorite was the one in the photo below.

After they were judged, they were put up for auction. That was fun to watch. Bidding was hot and heavy on some of them. That was good. More money for the children.

Many of the pumpkins were given lit candles after they were carved. I liked the expression in the one above.

I looked at the pumpkin below several times before I realized that the lovely ring of white on the top was cauliflower pieces. This must have been a vegetarian pumpkin or pumpkin carver.

Below is a photo of the auctioneer. He was very good. He knew how to work the crowd so they would bid higher and higher. It was a lot of fun.

I put the photo of this cute little girl on last, to bring us back to reality. She was working that day, selling candy. She had no time for foolishness.
I bought a chocolate candy from her just so I could take her picture. She is going to be a beautiful woman one day. I hope she doesn’t have to work on all the holidays.

There were many things going on in the Ajijic plaza on Saturday, October 26th. I saw old friends and made some new ones too. I may also have seen ones that I didn’t recognize under the zombie costumes. I hope the zombie dance brought in a lot of money for the Red Cross.

Catrina Dolls Event on the Ajijic and Chapala Malecon