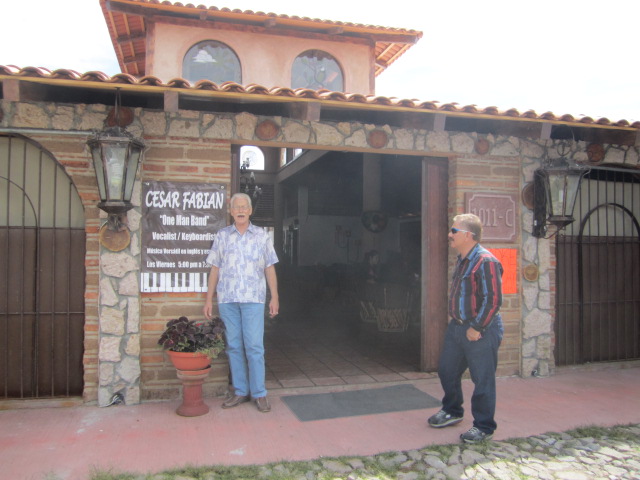 Tammy and I were on another adventure of the area east of Chapala. We stopped at El Gran Salon restaurant for a bite to eat but their electricity was out. In front of it are Tom Sumner, one of the three owners, and on the right, the musician Cesar Fabien. He plays and sings there. It just opened on July 22nd. They have Karaoke on Thursday nights. I was told that quite a crowd gathers for it. This restaurant is easy to find. It is on the main road that goes along the lake towards Mezcala, on the lake side. It is just a few miles outside of Chapala, before San Nicolas. Their hours are: one to eight in the evening from Monday through Friday. Tom is also the owner of the consignment store in Chapala just before the American Legion.

There are only three large restaurants in the area around San Nicolas and San Juan Tecomatlan. One is Cain’s Restaurant. ( I have shown you several photos of it in the previous article.) One is El Gran Salon and the other is an Italian place, Focaccia.  All three of these are interesting and I encourage you to visit each one. They are very different from each other.

After visiting with Tom and Cesar, we went on towards the small town of  San Tecomatlan. Lucky for us, it was their big holiday of the year. There was going to be a parade later in the day but we couldn’t stay that long. The town was plastered with pink balloons and streamers. It was beautiful. Tammy and I both loved this very small town. We were the only expats and we attracted attention, especially from the local children. I imagine that not many tourists visit them.

The sign is on the right side of the road. Don’t drive too fast or you will pass it up. There are some stores along the main road but you have to drive down into town to see the main plaza and church. Turn right, towards the lake. You will be surprised because at first glance, it looks like nothing is there except the few stores along the main road. But as you drive closer to the lake, you will see the town. It is well worth visiting.

Some of the streets are very rural as you can see in the photo below. This town is like a Mexican movie set because it is so picturesque. Even in the middle of town, there are many open fields. I saw and tractor parked in front of the church.

Even though this was a big parade day for the town, there weren’t many people around. Mostly, they were in near the church.

The houses were small but they were well cared for. There were also some houses that looked to be a hundred years old or more. Some of them were falling apart. This is not an expat community so we didn’t see any mansions. This is a very humble area.

The store in the above photo was almost directly across from the church. They were ready for the Day of the Dead with the wreaths for sale. The boy out front appeared to be the son of the owner.

Above is the only government office I saw while I was there. It was extremely tiny. It was also next to the church.The butcher shop was  across the street from the church. This appeared to be the center of the town. We saw more people around the church and these small shops than anywhere else in the area.

I love to take photos of the dogs. This one, of course, was hanging out in front of the butcher shop. He seemed relaxed, well fed, and happy. That is always a good sign in a town. If the street dogs are happy and well fed, then maybe the people are too.

The park area was also next to the church but no one was in it yet. Maybe after the parade it would have gotten crowded. I am sorry we had to miss the festivities. We will have to wait another year for it to come around again.

I loved this little town and the church. Everything was very clean. It is an old town. We spent a couple of hours walking around and we didn’t see any other expats. People acted surprised to see us there. 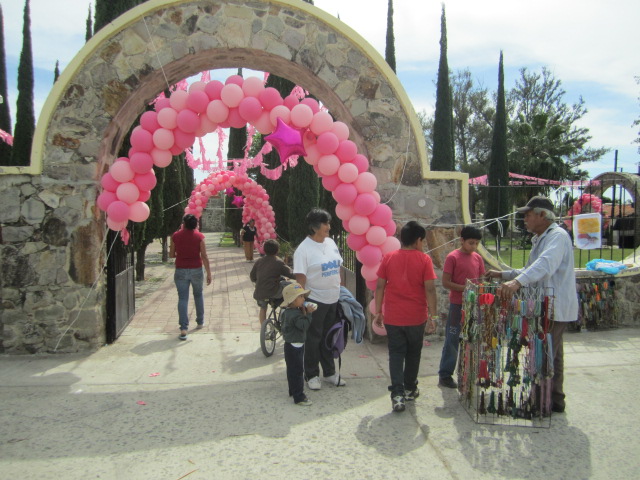 The church was lovely. It was in the center of town. I have no idea of why they had so much pink both inside and outside of it.

Even all the fresh flowers were different shades of pink. We were told that a parade was going to go down the center of town and pass by the church but it wasn’t going to happen for several more hours. We didn’t have the time to wait around for it.

I loved all the pink balloons and streamers. Several people were already waiting around in the yard for the big event to come. They were friendly towards us. I felt very welcome there.

The next three photos are of an Italian restaurant a bit further up the road from the town of San Juan Tecomatlan. It is on the mountain side of the main road. They have a pizza oven in the back and I have heard that their pizzas are delicious.

There is a nice view of the lake from the patio and the restaurant itself is filled with interesting things. Every wall both inside and outside is covered with objects, handmade things, religious icons, posters, paintings, sculptures. You name it. You could probably find it on these walls.

Check out the photo below. There is even a deer head mounted on the left side of the restaurant wall.

I had a lot of fun exploring this area with my friend Tammy. It doesn’t take long to get to it. I am guessing that when the lakeside starts expanding in the coming years, this will become a highly desirable area because it is so close to Chapala. And also, it is beautiful out among the fields and with the views of the lake. If I had the money, I would be tempted to buy something while the prices are still low.

A Trip to Vista Del Lago and the Chapala Golf Course

One thought on “San Juan Tecomatlan, Near Lake Chapala Mexico”