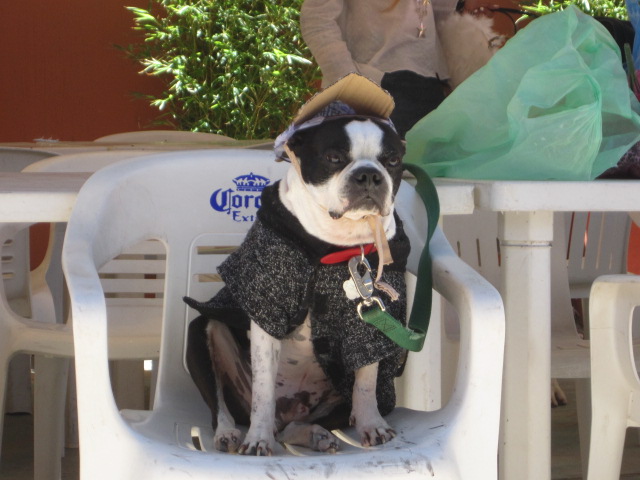 This last weekend went to the dogs in the Lakeside area. Saturday evening at Salvador’s Restaurant in Ajijic, Anita’s Animals had a big spaghetti fund raiser for her shelter out in San Juan Cosala. On Sunday, there was another fun raiser near Santa Cruz at the new Lucky Dog shelter. It was their grand opening and they had free hot dogs and cold drinks. Unfortunately, I am only one person and I had already planned to attending the once a year doggie fashion show that was held at the American Legion in Chapala. They also had barbequed hot dogs and hamburgers. It was a fun event.

Above is a Boston Terrier named Razor Back. He was very patient. His owner made his Sherlock Holmes costume. He didn’t much like that hat.

Barbara Madren and Joan Alexander took care of the people who were registering their dogs for the show. It started at noon and ended around two. Sunday, March 24, 2013.  There were three events with prizes: Best trick. Most photogenic. Most obedient.

Above is  photo of the organizer of the Doggie event, Betty White. Four years ago, she was one of the judges. Then she took it over. She said when it started, it was in May but that was too hot for the dogs. She changed it to March.  There were fewer dogs entered this year than last but it was still a very successful event.  If you are interested in volunteering for next year, you can contact her at 765-3607. Or call the Legion and leave her a message. Their number: 765-2259.

The puppy in the above photo didn’t know what to think about all the activity. It must have been his first time at the show.

Before the dog show, there was a barbeque. You could have a hot dog or a hamburger. Or both. Plus delicious baked beans and potato salad. The barbeque is every Sunday from noon to about three in the afternoon. Nothing like loving arms to calm a dog down.

The barbeque is only thirty five pesos and you can also buy a drink at the bar inside. The food is always good.

Everyone is welcome at the American Legion for almost all of their events. Rarely do you have to show membership in order to be part of the celebrations. This one was open to all people and their dogs.

The above little dog was wearing a jacket that had the words Donation Dog written on the sides with a pouch for money.  She, Mellie, was a “working girl” I was told. Which meant that people were supposed to fall in love with her and give a donation into her side pouch to help pay for the spay and neuter clinic. I must admit, she was hard to resist. She was taking a break in the above photo, waiting for a root beer float.

Excitement was building as the dogs were getting their costumes on and waiting for the show to start. They were all very patient and well behaved. I was surprised that there were no dog altercations. Just a lot of love.

Lucas won in the best trick category. He was well behaved too.

Lucas and Sergio were show stoppers with their basket of tricks.

Before the show started, the official photographer, Ric Leming, took photos of people with their dogs. If people wanted to order copies, the charge was only 60 pesos for a 5 by 7 and 100 pesos for (2)  5 by 7s. If you are interested in hiring him, you can reach him at: ric_leming@yahoo.com.

It takes a lot of volunteers to put on an event like this. Tom Sumner is often to be found at the American Legion and he does a lot of work to help with events. He is a great M.C. because he has a confident manner and he knows everyone. He has a great voice too.

It may be a lot of work to volunteer for an event like this but it also looks like they are having fun.

The three judges are in the above photo, Linda Hendy, Randle Moriarty, and Susan Reynolds. I would sure hate to have to be a judge. All the dogs were cute and wonderful.

Marmo was very patiently waiting to get his costume on for the parade. Check out the little dog in the left hand corner, also waiting for the parade.

There were some very creative costumes in the parade. I couldn’t quite figure out the one in the above photo. Is that bananas on the dog’s head?

The woman in the above photo arrived at the end of the parade. She said she didn’t remember that it was doggie day at the Legion. She was just coming for lunch with her dog. I liked the photo because it shows how much she loves her little dog, all dressed up in ribbons and bows. Doggie Day or No Doggie Day, she was there with her best friend for the barbeque. We all love our dogs.

I would be doing all the dogs in this area a great disservice if I didn’t write about Gudrun Jones and the Ranch. The Ranch is located on the mountain just outside of town. There are currently sixty four dogs living there and they are up for adoption. They all have their shots and are in good health and are spayed or neutered. Gudrun has an online book of their photos. You can look through it an if you see a dog you like, you can call her and she will take you up to see it. Most of the dogs are large. But there are some smaller ones too. They have plenty of room. She told me a story about one dog that was adopted out three times and each time he ran back to the ranch. Finally, she decided to keep him out there. It was his home and he didn’t want another one.

There is no charge for a dog. They just ask for a donation, whatever you can afford. You can imagine how expensive it is to maintain the Ranch. They have fund raisers during the year. Coming up is a yard sale. It will be on April 6th an 7th at Paseo Del Mirador #14 in La Floresta. If you would like to see photos of the dogs up for adoption, check out www.Lakesidespayandneuterdogranch.

I love the photo of Oreo, at the bottom of the page. He looks like he is looking for a cookie.

To sum all this doggie day activity up: WE HERE AT LAKESIDE LOVE OUR DOGS. I hope you will make an effort to help support the places that are devoted to helping them. Anita’s Animal Shelter, Lucky Dog Shelter and The Ranch. The telephone number out at the Lucky Dog shelter is: 331-300-7144.  Gudrun Jone’s is: 766-3813. Or e mail: loveonaleash@prodigy.net.mx  Anita’s Animal Shelter: at www.Anitasanimals.com.