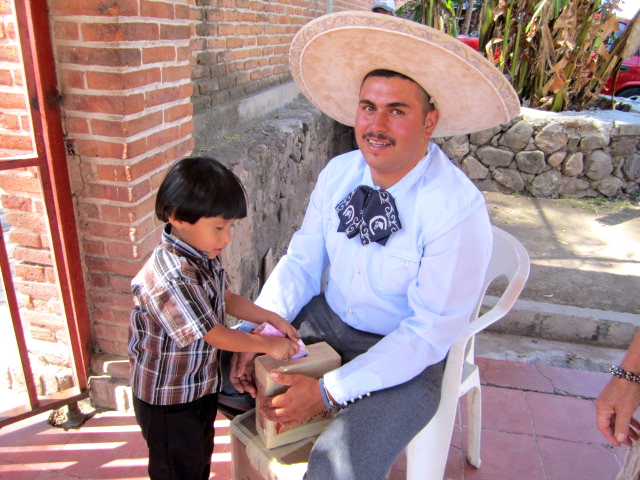 Escaramuza in Spanish means skirmish. Another meaning is, “Riding from the heart.” This one took place at the Ajijic bull ring on Sunday, April 7th. 2013. It was an all woman’s horse show. It was a combination of equestrian skills, handcrafted tack, beautiful costumes, music and food. It is a rich heritage of living folk traditions dating back hundreds of years.

Tickets were eighty pesos at the door. I loved watching the little boy helping his father collect the tickets. He was so proud to be of use.There were several food stands. The woman in the photo below was selling tacos. There were also men and boys wandering around the bleachers during the performance. They were selling snacks and drinks. It was a hot afternoon so the drinks went quickly

The riding is dangerous and precise. I watched the women saying prayers before performance. I had no way to gather information on this event. All I have to share with you is the photos and the joy I had while watching them. Most of the women on the horses were very young. Some looked like they were young teenagers. I was impressed with their skills and determination.

At the beginning, all the women came in with their various groups. The two men in the above photo continuously went out and smoothed off one spot and put down more chalk. I guess it was to help then to know where to stand with their horses.

All the horses together along with music and people standing for the Mexican National Anthem was very moving. It was obvious that a great deal of planning and effort went into this event.

Above is a photo of one of the groups. All of the women were waving to people in the stands and they were cheering loudly and with great enthusiasm. I am guessing that many of them were relatives and friends of the riders.

Above is another group coming out into the arena. Before each group came to the center of the arena, they ran their horses in circles.

You cans see from the above photo that the rider was a very young woman. She looked happy and relaxed.

Before the event started, some of the people in the audience went closer to the arena so they could have a better view.

I had to take a photo of the happy crowd. These young women may have had a friend in the show because they were quite expressive all afternoon.

Above is a photo of the horses weaving around each other. They run fast during this event. Dangerous looking.

Above is another photo of the weaving horses. Everything has to be perfectly timed. I only saw one time when two horses bumped into each other. Fortunately, they didn’t fall.

The women had their horses running very fast around the edge of the bull ring.

Above is a photo of the horses running in a circle. They were just completing it in the photo.

The little boy in the above photo was smiling at me as I took his photo. It was such a pleasure to see him in his father’s arms. There were lots of children at this event.

This little boy allowed me to take his photo. He was very proud of his new pet. I wonder how long it will live as a toy.

After the women did their own performances, they joined the audience to cheer their friends on.  After the horses, there were some folk dancers and then there was a ceremony to give out the certificates. I missed all of that because it was hot and I was tired. I didn’t realize there were going to be dancers later on.  I was glad I had seen the horse performance. Maybe next year I will stay the entire four hours.

One thought on “The Escaramuza show at the Ajijic Bull Ring”