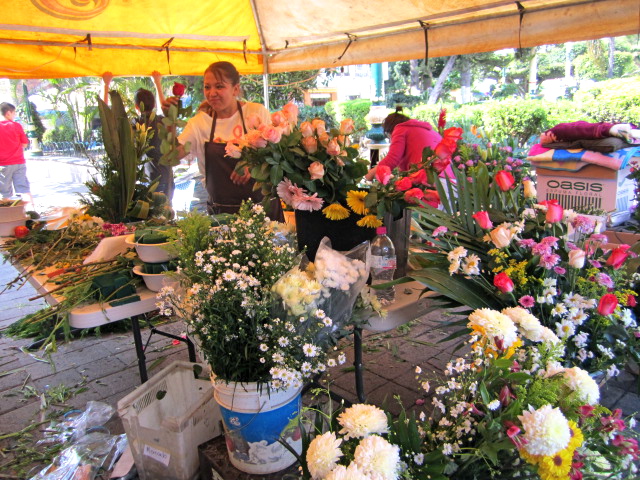 The Day of the Dead is one of the biggest holidays in Mexico. It lasts for three days. During that time, people clean up the graves of their departed loved ones and create altars in front of their homes or at the graves. The children run around and trick or treat, just as they do in the States. There are parties and lots of loud bangs of the firecrackers and cohetes. It is believed that the noises scare off evil. I don’t know about scaring evil but they scare many dogs into hiding.

People buy artificial and real flowers to decorate the graves and altars. The plaza in Chapala had several flower stands. There are also beautiful round wreaths that are put on the graves. These wreaths are made out of brightly colored artificial flowers and ribbons. They stay on the graves the rest of the year.

This little boy was still wearing his Halloween costume. He wasn’t ready to give it up yet.

One street is blocked off on the third day and young people spend the entire morning decorating the altars. The celebration lasts from eleven in the morning to eleven at night.

This is also a Catholic holiday, All Saint’s Day and All Souls’ Day.  There are many Catholic symbols on the altars.

Skulls are also used to decorate the altars. This holiday dates back to Pre-Hispanic times when skulls were kept as trophies and displayed during rituals to symbolize death and rebirth.

The Pan de Muerto (Bread of the Dead) is only made during these few days of celebration. They are sweet and made with eggs. Sometimes they are made into various shapes, like skulls or rabbits and the frosting is made to look like twisted bones. This bread is often placed on the altars for the enjoyment of the dead.  The stand in the above photo was giving out free samples. It was delicious, although fattening. Their bread didn’t have frosting but was covered in sugar.

Altars have the favorite foods and drinks that the departed enjoyed in life.

They also have the favorite things that the departed loved in life. I saw one altar with a saddle beside it. One had a small boat. The one above had a violin.

Often the altars include wash basins and mirrors so the dead can wash up and see themselves before they eat their favorite foods.

The above area was elaborately decorated with dry flowers on a cross and another cross made out of fresh Marigolds. The Marigold is considered the Flower of the Dead. It is believed to attract souls to the offerings.

The above photo is one of the most elaborate decorations at the celebration. It had outgrown the traditional altars and was taking over the entire area in front of their home.

After visiting the street with the alters, I went to San Antonio to see the cemetery. Things were just getting started. People were arriving with flowers and food. Many families would be staying until late in the night. There would be Mariachi music, and picnics on the graves of their loved ones and many stories about things they did when they were alive.

As you can see from the photos, the graves have been cleaned up and flowers and wreaths were decorating them. Several families had already gathered by the graves of their loved one.

No matter if they were graves of the wealthy or of the poor, they were an inspiration. So much love was expressed in the care that was given to each grave.

As I was leaving the cemetery, the priest was getting ready to have mass at the entrance.

Outside of the cemetery gates, there were several food and beverage stands. There would be no reason to go hungry that evening.

People were still arriving as I walked down the hill. They were bringing flowers and food to their dead loved ones.

The Day of the Dead is one of my favorite holidays. There is such a sense of joy in the town with all the fireworks going off day and night and people partying in the streets. It reminds me that death doesn’t have to be something to dread. The Mexicans believe that the spirits of their loved ones actually visit these altars and inhale the essence of the food and drink. So, why not? I prefer this belief over the belief that we no longer exist after death.