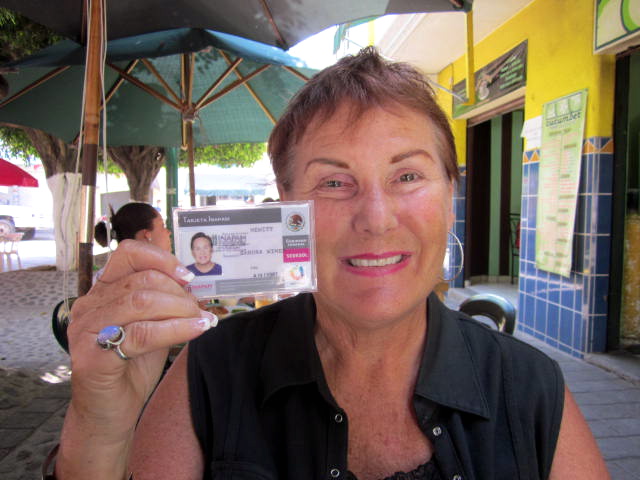 If you are over 60, you are eligible for the DIF and INAPAM cards in Mexico. These are Mexico’s senior discount cards and they can help you save a lot of money. DIF is the State card. Each State in Mexico has slightly different requirements and sometimes the requirements change from one visit to the next. DIF stands for Plan Venerable a Los Adultos Mayores. In English that translates to: Venerable Plan for Older Adults.

For several months the DIF card was the only one available at the DIF office. Recently they were issued the National card. Now it is possible to obtain both cards at the same time.

INAPAM stands for: Institute Nacional de Atencion Par Adultos Mayores Venerable. In English that means National Institute of Attention for Venerable Elderly.  I like the sound of the word VENERABLE.  The word ELDERLY, I don’t like so much.  I don’t consider myself Elderly yet. But if it saves me a few dollars, I will go along with it.

At one time, the office issued a forty-page directory of all the places that accepted the DIF card but that is no longer available.

If you like classical music, the Jalisco Philharmonic Orchestra that performs at the Teatro Degollado in Ajijic, gives a fifty percent discount on their tickets to DIF card holders.  If you ride buses, you can just show your DIF card to the bus driver and you get a fifty percent discount. This also includes long distance buses. But if you travel out of Jalisco, you will need to show the National INAPAM Card for the discount.

The INAPAM card is honored Nationally in over 20,000 retail and service outlets. This includes cinemas, restaurants, (VIPS, Sanborns, etc.) drugstores, inter-city buses, airplane tickets, physicians, opticians, laboratories, medical equipment outlets, museums, archaeological sites, parks, etc. It is a good idea to show both your DIF card and your INAPAM card if you think they may be honored. No harm in trying.

The DIF card also allows Mexicans to get discounts on their annual water bills and property taxes. Sometimes they will allow this discount for expats too. Again, there is no harm in trying.

For Lakeside residents, the office is located in downtown Chapala. The address is Calle Degollado # 327. It is easy to find.  It is just a few blocks from the downtown plaza.

The office is only open two days a week, Monday and Tuesday. You should go in early and put your name down in the book at the front desk. If you don’t, you may not be able to get your card that day as they only give out twenty-five cards a day. The office doesn’t open until around nine-thirty but you can go in much earlier than that, sign in, and then come back later. Just make sure you don’t stay away so long that your number gets called and then discarded.

The office closes at two in the afternoon.  You may have to sit around and wait a couple of hours. Take a book or else talk to some of the other expats.  As an added benefit, you may make some new friends.

You need the same paperwork for both the DIF and the INAPAM cards. Just make two copies of each form.  You will need:

1. The original and two photocopies of your FM3 or FM2.
2. Your passport and two copies of the photo and signature page of it.
3.  Four small photos of yourself, either in black and white or color.  You must be facing forward.
4.  Your blood type.
5. Proof of residence. Must be a CFE, Telmex or Simapa Bill.

(I didn’t have any of these bills in my name but they let me use my landlord’s telephone bill. But I saw two people turned away the same day because their name wasn’t on the bills. I guess it is up to the person doing the admitting.)

When your cards are being typed out you will need to provide the name, address and phone number of a friend or relative that they can contact in case of an emergency. Plus your own phone number if you have one.

You will also need: Patience.  It is well worth the wait. Keep the DIF card with you when you shop and go to medical or other offices. Be willing to show it often. There has to be some advantages to getting older.

Above is a photo of the DIF office in Ajijic. They help older Mexicans and their families. They sponsor events to raise money. The Reboso parade is one of them. They also distribute food to the elderly, including beans, rice, cooking oil, cookies and other things. This is called, “despensa”.  They take the senior citizens for trips and there are many other activities. They are doing a wonderful service for the poor elderly Mexicans in town.

6 thoughts on “Getting the DIF & INAPAM Discount Cards in Chapala”