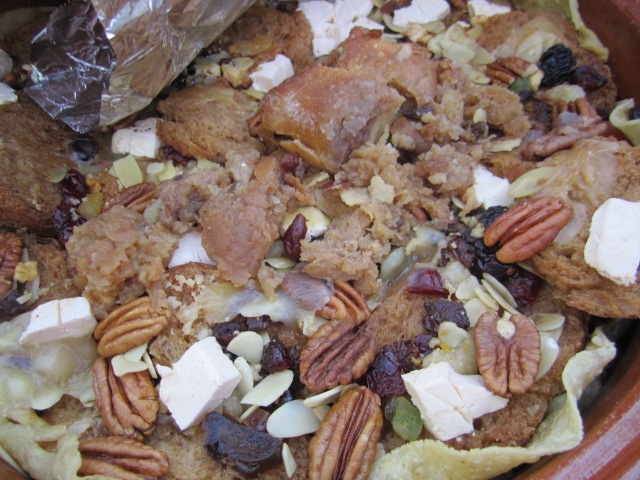 There are many different combinations of these ingredients and additions to the recipe. But here are the symbols.  The bread, which is usually bolillo bread, represents the Body of Christ. Syrup which is from mulled syrup made of whole cane sugar, known as piloncillo, represents Christ’s blood. The bread is soaked in this syrup.

It is up to the cook to be creative. He or she can add nuts, seeds, dried or fresh fruits, including apples, dates, raisins, apricots, bananas, peanuts, pecans, almonds, pine nuts, coconut, walnuts and whatever else he or she likes. As you scroll through these photos you will see many different ways of making it, and I can say from tasting them that they are all delicious.

There were hundreds of people at this event which was held on the malecon this year and it was impossible for me to get to all of them or get names of the cooks. I apologize for not being able to be at several places at once.

There were sixteen competitors and eighteen varieties of the Capirotada. There was a first prize, second prize, third prize, and popular vote prize. The first and second prizes were won by local Mexican women. The prizes were a combination of pesos and coupons to meals at local restaurants around the lakeside area. 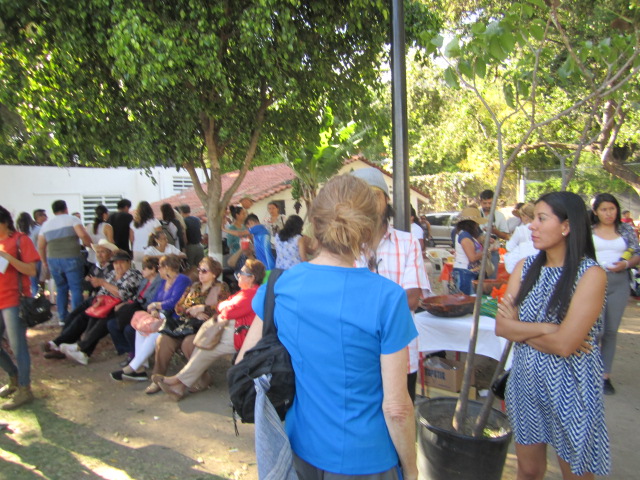 The main organizer of this event, Lee Hopper, estimated that between six hundred and eight hundred people showed up for it.

The first two years of this event were held at the Ajijic Plaza. They moved down to the malecon because of more room and more parking. It was a much better place to have it. Last year I couldn’t even get near the food. Not enough room. But this year I managed to see most of them. It was a real pleasure to be there under the trees and near the lake. They are planning on having it again next year at the malecon. 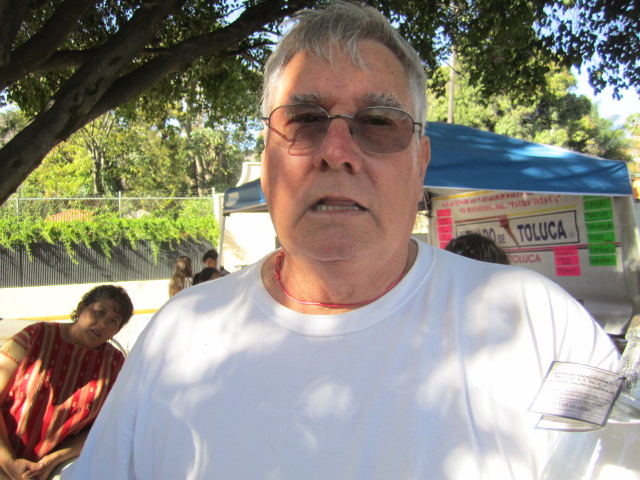 Since it is such good advertising for them, he can’t figure out why the larger restaurants haven’t seen the benefits of bringing in extra customers. He also gets other prizes to hand out. Like two bottles of Tequila Bonanza. He said that about seventy five percent of the restaurants in the area participate. I think that is excellent participation.

Each stand is allowed to sell twenty to twenty five larger servings of the Capirotada to help defray the cost of making it. In total, they gave out 1700 cupcake holders of Capirotada. Considering all the expense of the various ingredients, that is a lot of money invested for the participants. 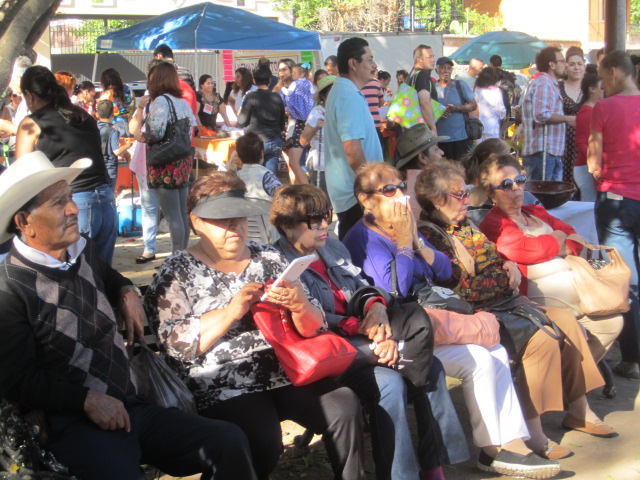 I talked with Lee Hopper on the phone about the event. He said he thought that about sixty percent or more of the visitors were Mexicans from Guadalajara. Maybe there were thirty expats. You can tell from the crowd photos that there are mostly Mexicans at the event. The expats don’t know what they are missing. For sure, I am going again next year.

The event started around four in the afternoon and ended around seven thirty. At five thirty there was a mariachi group, Real Ajijic was their name. They played for an hour.

I enjoyed seeing the young men involved in the competition. They had to compete with the Mexican women who have been cooking all their lives. They didn’t stand a chance but good for them for trying. Maybe next year…….

If you are like me and sometimes need to get away from crowds, there was always the malecon to walk along or just stand and lean against a tree or pole and look out at the beautiful lake and mountains.

I loved the above recipe because of all the coconut on top of it.

You can see in the above photo, the plastic containers that had the Capirotada for sale. I was lucky enough to be able to buy some to take home. I also had several of the free cupcake cups of it. I admit it, I had too many of those free cupcake cups.Bread pudding happens to be one of my favorite desserts so I went a little, okay–a lot overboard.

I really liked the above recipe too. It had a crust on top. Delicious.

The man in the photo above was pointing to his wife, one of the participants in the competition. He looked so proud. I wonder if that was their son with the camera. It was a great place for taking pictures.

It was fun to see all the smiling and proud faces of the cooks.

If you were overwhelmed with too much Capirotada, there was always the ice cream man nearby.

There was a breeze coming in off the lake which made it nice and cool. Also the decorations looked beautiful blowing around, all the different colors. Very festive.

Some of the crowd decided to relax around the fountain. Good idea. But I was too busy trying to get photos of the Capirotada stands. The free samples did not last long.  I was glad I had gotten there early. If you are around town for the one next year, I hope you don’t miss it.

Also, Lee Hopper would like to invite anyone who wants to participate in helping with next year to contact him. Any restaurants wanting to donate food coupons? Helpers with the organization? Here is his e mail address: feriadelacapirotada@earthlink.net

Don’t forget, this is a free event for both the participants and visitors.