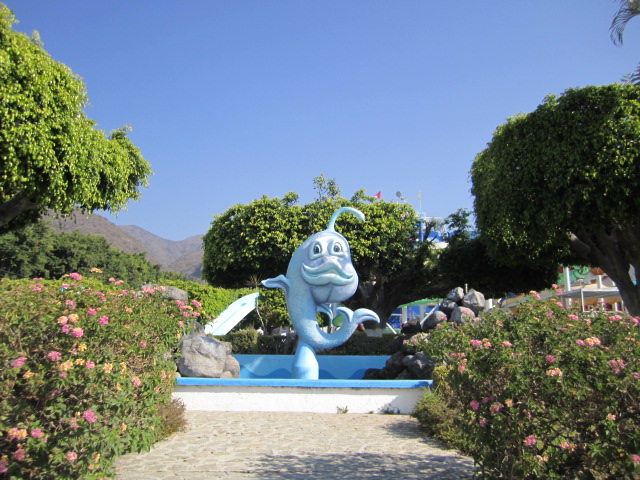 This year the 39th annual Chili Cook-Off was again held at Todolandia Water Part. But it was much further up the hill. I, as usual, arrived too early, walked up that hill and was too tired to walk back down to watch the parade arrive. So all you are getting is a photo of the funny looking fish at the entrance of the park that I took on my way up the hill.  To me, it looks like a whimsical representation of the events of the Cook-Off. I went on Saturday. It was held on Friday the 10th, Saturday the 11th and Sunday the 12th.

Since I arrived so early, it hadn’t had time to fill up yet. Later in the afternoon all the tables were full. The Chili tasting started at twelve thirty. There were ten contestants but one was missing on Saturday. The area above is not where the cook-off was held.

There were many different things happening on all three days. Friday there was the Jerry Mayfield band, African Music and Dance with Hula Hoops, Aztec Dancers, Daniel Cordero (Singer and Guitarist.) And Abby, another singer.

Saturday there was Sol y Luna, as seen in the photo above, Mariachi Real Axixic, Lake Chapala Dance and Fitness Center, Blue Jay Slim and the Blues Machine, Ballet Folklorico.

I hope I didn’t miss anyone. With all this entertainment, there was always something going on at the main stage or on the sidelines.

Some of the craft people at the Chili Cook-Off are local but others have come many miles to sell their goods. There were 59 stands, not including the ones in the Chili Cook-off. These included food booths, solar energy booths, Cruz Roja, lots of craft and textile stands, leather, knives, t-shirts, fine art, animals, etc. I am glad I went early before the crowds so I could walk through the stands end enjoy seeing everything without running into people.

Above is a photo of one of the craft and clothing aisles. It was early in the morning and not many people were there yet. Below are two nonprofit groups benefiting from the Cook-Off.

Centro de Desarrollo (Ajijic) Center for Family Development is a nonprofit service that benefits from the Cook-Off. They feature family planning, and Sexual and Reproductive Health Services, medical consultations and informative talks in local communities and schools.

Lake Chapala Shrine Club  They help lakeside children needing medical assistance at no cost to the families. They provide transportation for the children and parents to doctors and money for food and lodging if necessary.

The woman in the above stand was selling clothing. She was dressed like Frida Kahlo. I am sure of that because I asked her. She said yes. Many women admire Frida Kahlo, not just in Mexico but all over the world. She was a brave soul.

Is that a crocodile or an alligator? I was too scared to ask the man nearby. But I think it is a crocodile. I don’t care which one it is, as long as it isn’t in my swimming pool.

The gorilla in the background is just a photo. The bird is real and I got up enough courage to hold it out on my arm. Still too scared to ask any questions about what kind of bird and where it was from. I think it is some kind of Falcon. What a beautiful bird.

The three photos just above this are animals from the Wildlife Rehabilitation Center. They bring different animals, snakes, and birds to the Chili Cook-Offs. They always bring creatures that brave people can handle. Mostly those brave people are boys, witness the photo just above this. No fears…..

The woman above worked for eSun energy. I always like to visit their stand because they give out free tea, or coffee, cookies and sometimes shopping bags. They also have comfortable couches to sit on.

The man at the tequilla booth wasn’t as generous with his tequilla samples. I slowly passed by his stand, twice, eyeing the tequilla bottles but he never offered me a taste. Maybe he was saving all the samples for himself. So he didn’t get included into my post.

The Red Cross is one of the nonprofit organizations that gets money from the Chili Cook-Offs. They served over 7,800 patients in 2015 and many of them did not have the money to pay for their services. But the Red Cross will deliver emergency medical services to anyone, regardless of his or her ability to pay. That is why the Red Cross is always in need of financial help. You might not even think about them until one day they save your life. Then you will know their importance.

If you decide you don’t want chili, there were lots of different food stands. Some of them were to raise money for different charities. All the food looked delicious. Below are two more nonprofit organizations benefiting from the Cook-Off.

School for Special Children/Escuela para Ninos Especiales is a nonprofit organization created to improve the educational opportunities for children with a variety of disabilities. They provide a clean, safe physical environment and improved nutrition during the school day. They work closely with parents of these children and the Mexican community at large.

Love in Action Center Changing Children’s Lives with Love. This is a home where children who have suffered neglect or were in high-risk environments are placed by the Mexican government so they can be safe.

Another option instead of sitting in one of the chairs in the middle of all the food stands was to find a comfortable tree and have lunch.

Below are three more nonprofit foundations that will be helped by the Chili Cook-Off.

Ninos Incapacitados del Lago  A nonprofit organization of volunteers who help children with life threatening illnesses. They help pay for their medical expenses. They support approximately 165 children with many different conditions.

Casa de Ancianos de Chapala, Home for Elderly Citizens in Chapala is a nonprofit home where elderly residents of lakeside can live who have significant health issues. They have 24 hour nursing care and doctor visits.

Los Ninos de Chapala y Ajijic, A.C. The Children of Chapala and Ajijic, A.C. Is a non-profit organization that sponsors children. Currently they have more than 190 children actively sponsored.

I hope I got in most of the information. There was a lot to cover. I like this last photo because the man looks so happy. I didn’t get his name. I also didn’t pay much attention to what he was selling. Maybe it was just his good nature and that in itself is an invitation to the next Chili Cook-Off.  I hope you don’t miss it. It is worth the climb up that hill.

4 thoughts on “The 39th Chili Cook-Off in Ajijic”