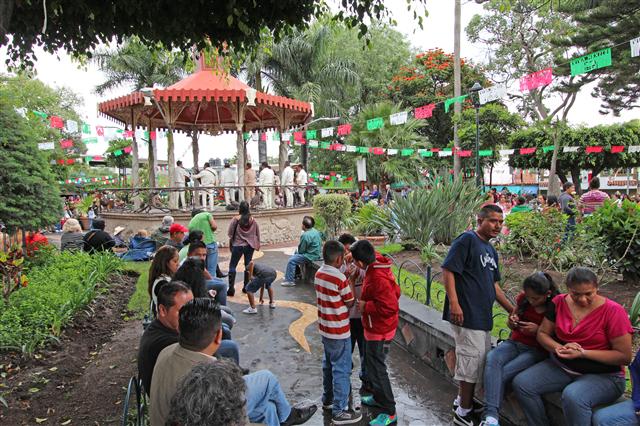 The festivities during the week before Revolution Day include many things in the Ajijic Plaza. Almost every evening something is going on. One of my favorite events is the Reboso Parade. It took place this year on Sept. 15th. It is a special time for the young girls and older women to shine. Rebosos are shawls and the Mexican women take great pride in their shawls.  They have a parade around the plaza wearing their finest.

The plaza is very crowded for this event. In the photo below you can see a small part of the parade. The two women in front are carrying a large bread. I do not know the significance of that bread. Many of the women are also carrying fresh flowers and umbrellas.

I love the photo below of the proud Mexican women. I have seen the same ones in several of these parades. Check out their beautiful dresses.

The little girls also are given special consideration during this parade. They are wearing beautiful dresses too and carrying fresh flowers. It is wonderful that they can see their grandmas being honored this day. Check out the little girl in the back row wearing her green reboso. She looks so proud. I love seeing that in little girls.

As you can see from the photo below, everyone had a great time. Lots of laughter. There of course was a mariachi band that played.

Many people had food stalls set up. This stall had corn and fresh cut up beets and cut up watermelon. After the reboso parade there were events for the children. One was a greased pole. Presents are put at the top of this greased pole and children try to climb to the top to get them. At eleven p.m. the Grito is read. Grito means Cry of War. It is the Independence declaration and in every town in Mexico it is read at that time. That is the time it was first read in the small town of Dolores, Sept 16th, 1810, by Miguel Hidalgo y Costilla. This marked the beginning of the Mexican war of independence.

Now we move on to Sept. 16th and the children’s parade. This parade is also celebrated in every town in Mexico. It is when all the school children get to march through town. It is amazing just how many children there are here. There was so much pride in their faces. I loved seeing them.

Their teachers and mothers and sometimes their fathers walked along beside them. I also saw pride in the faces of the adults. Children are our wealth. They are our future.

I like seeing the uniforms and the clean white gloves that the children wear while they are marching. Check out the smile of the girl in front of the line in the bottom photo on the far right.

For some of the smaller children, riding on a float is much less tiring. the girls have their hair done up with the colors of the Mexican flag; white, green and red. The younger children may not understand the significance of this day but I am guessing that they are enjoying feeling part of a larger community.

The horses always come at the end of the parade, for obvious reasons. Before the horses are the brass bands. This woman and her horse show such grace and discipline that they are almost like a statue, an idealization of a woman on a horse instead of reality.

These girls are posing in the plaza. After the parade many of the people on the floats or marching went to the plaza to walk around and meet their friends and celebrate.

I like the photo below of the tired little girl in her father’s arms. She is all dressed up for the parade but I think it was a bit too much for her. Maybe next year…..

The children had fun playing in the plaza after the parade. They were still wearing their school uniforms. The girl looks a little tired.

As you can see in the photo below, the plaza was packed with children after the parade. I wondered what was going on with these two girls. The one on the right looks unhappy and the girl pulling her forward looks angry but determined. Maybe the girl on the right was tired and wanted to go home and her friend wanted to stay. Who knows what goes on between young girls, or anyone else for that matter.

I love to watch the dancing horses. After the parade the cowboys gathered in a group close to the plaza and some of the horses danced. You can see in the lower right of this photo that someone is playing music for them.

There were many beautiful young girls and women wearing their fancy dresses and riding their horses. I like this photo because the man who must be her father, is leaning on her horse. Obviously, he is being very possessive of his little girl and making sure she is okay. He is probably watching out for his horse too.

Below is another photo of a dancing horse. He put on quite a show. I had to be careful because these horses were dancing very close to the crowded sidewalk.  Just another reminder that in Mexico you have to watch out for yourself. There isn’t a lot of concern about safety and there is no insurance. If you are stupid enough to step off the sidewalk and into the path of a dancing horse, that is just too bad. Be more careful next time. We are all responsible for ourselves here in Mexico. Unless you are young and you have a father looking out for you like in the photo above and also in the photo after this one.

My final photo is of my favorite breed of horse, the Friesian. There are several of this breed in town and I am always happy when I see them. They are so elegant. Wish I had hair like that. So this parade comes to an end. I hope you enjoyed the photos. If you decide to visit Ajijic, this is an excellent time of the year, during the Revolution Day festivities. So much excitement is in the air and it is the end of the rainy season. The winter crowds have not yet arrived.

One more comment. Check out the crowd behind the Friesian and his rider. You will see babies, young children, young men and women and older adults. The event is for everyone. Especially for people who love children and horses. AND FUN.

A Boat Ride to Scorprion Island on Lake Chapala