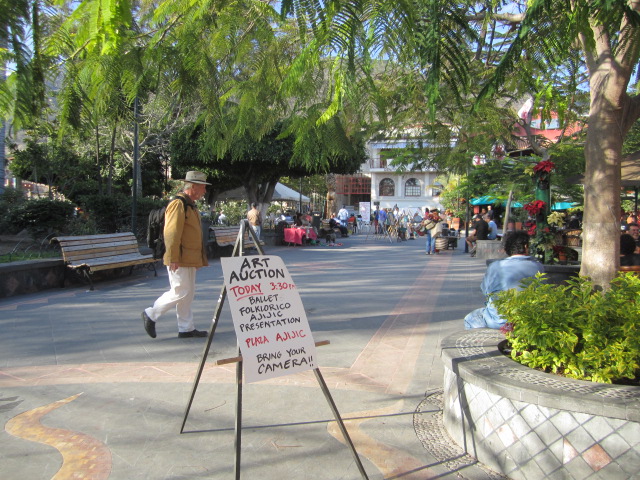 Efren Gonzalez had an art auction at the Ajijic Plaza on Friday, January 3rd, 2014. It was at three thirty exactly. Efren said that he had converted to American time instead of Mexican time and he would be starting all his auctions at the advertised time, on the dot. Since he was a few minutes early, he waited awhile before starting. If you have never been to any of his auctions or talked with him, you will be surprised and delighted to get to know him. He is a very funny man. He puts on no airs. He readily admitted that he knows nothing about being an auctioneer. But his auctions are a delight to attend, even if you have no intention of buying anything. Efren might change your mind.

Efren often has auctions at the Ajijic Plaza. He waits until he gets enough paintings and then puts up signs.  At this auction, fifteen artists had donated paintings and sculptures. These are well known artists and also some of his students. The money raised goes to help support the Ballet Folklorico.

Efren Gonzalez and Luis Gusman started the Ballet Folklorico a year ago. Efren danced in it when they preformed in front of his art studio on Marcos Castellanos. Right now there are fifteen girls in the troupe and only five or six boys. They need more boys.  They will take children if they are twelve years old or older. Younger children aren’t as disciplined. Efren organized this dance troupe so that the Mexican children in this area will learn about their cultural heritage.

Before the auction got underway, all the pieces were displayed on the plaza. There were only a few sculptures but many paintings. Some of the paintings were in oils, some were watercolors, or other media. They were all very professionally executed and there was a great variety of subjects. I loved the large ant in the above photo. It was made out of rocks.

I also was impressed by this large green sculpture and the horse. I didn’t stay for the entire auction. It was very long with so many pieces. I have no idea how much these pieces went for. Whenever Efren started the bidding, he would always mention the estimated value of the work of art but start the bidding much lower.

Since there were so many works on display, I did not get the names of the pieces or the artists. I hope you will just enjoy seeing the variety of pieces. I love the way they displayed the warrior in front of the naked woman. It looks like he is defending her.

The works of art were all displayed so that people could walk around and get close views of them before the auction started. It was a beautiful day and there were many people at the auction and also just enjoying the sunshine on the plaza. The restaurant and coffee shop were both crowded.

Before the auction started, the two young men in the photo below were mixing up margaritas. They were free. Efren joked a lot during the auction about the free margaritas. He would tell people to raise their hands if they wanted someone to bring them more drinks. He said, to loosen up their wallets.  He loved to joke with everyone.

The auction was very well organized. There were no sound problems or any other technical problems. Efren has had many auctions and he knows all the ins and outs of putting them on.

Below is a photo of Efren Gonzalez. As you can see by his clothing, he is a casual sort of guy. He is extremely talented in many areas. He runs the children’s art program at the Lake Chapala Society. He is a muralist. He is a painter and a painting teacher. He also dances with his troupe. Yet he is very down to earth. I am sure he has many more talents which I am not aware of at the moment. He is a pillar of this community.

Below is a photo of one of Efren’s talented students. His name is Luis Alejandro. He has been Efren’s student for over four years and he is a great help to Efren. The name of this painting is La Musica. It sold for 600 pesos. I love the expression on Luis’s face in this photo. Filled with pride and hopefulness at getting a good price.

The drawing in the photo below was done by an artist by the name of Ernesto Barba. He is from Guadalajara. This one went for 2000 pesos.

Efren may not be a professional auctioneer but he sure knows how to work the audience. He had Luis take this painting over to the woman wearing the flowered dress. Her name is Beth. Efren then proceeded to tell her that she needed to bid on the flower painting because it matched her beautiful dress. She finally did and I think she won it.

Efren loved to tease people in the audience. The man waving in the photo below had won a dance contest over Efren. Everyone thought it was funny except the man sitting next to him. Maybe he was afraid he would be up next in Efren’s kidding routine.

Efren would often tease people by raising the price they had won the art work for and then watch to see their reactions. Everyone took as it was meant, a joke. But he kept the bidders on their toes, that is for sure. It not enough bidding was going on, he would offer up more margaritas. Or tell the bidders to send away a mate who wasn’t into spending money. You can see that Beth was enjoying herself, even though Efren had singled her out in the crowd. Or maybe it was BECAUSE Efren had singled her out in the crowd.

The painting in the photo below was the most religious one in the auction. There were many different subjects and styles in the art work.

Below is a photo of one of Efren’s paintings. He made some jokes about it to raise the price. This is an Efren Gonzalez painting!   He said and smiled.

In about the middle of the auction, the dancers came out. They were lovely.

The money raised at the art auction will go to buy more costumes for the dancers.

The little girl in the photo below was walking around with inexpensive candy for sale. Maybe one day, when she is older, she too can become a dancer. I hope so. I see her often, working at these events while everyone else is having fun.

The auction took place next door to the outdoor restaurant in the plaza. I snapped this photo because of the couple holding hands. So romantic.  It was beautiful in the plaza that day. I am sure it created some great memories for visiting tourists. And locals.

The last photo was taken as I left the plaza. The auction was still going on but I was tired. I had a long walk home. I will be sure to go to some of Efren’s future auctions. Maybe one day I will get up enough courage to raise my hand and buy a painting or sculpture. As Efren says, Art is a great investment.  So have a margarita and get out your money.

Keep your eyes peeled for signs of the next auction. It is a lot of fun, even if you don’t buy anything. Just sit and listen to Efren as he teases the audience. He is such a gift to our community. Largely because of him, art is a big part of our lives here. Thank you Efren.