The Pelicans of Lake Chapala in Petatan 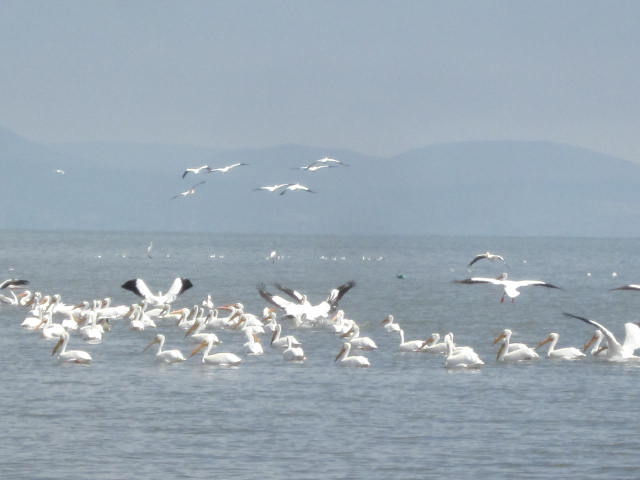 Yesterday, I went with three friends for a day trip to see the Pelicans in the small fishing village of Petatan which is on the south side of Lake Chapala.  It was a beautiful sunny day, as usual.  We read about it in the Guadalajara Reporter newspaper. That is often a source of interesting short trips.  It takes just a little over an hour to get there through picturesque scenery, small towns and farm lands. There are many photo opportunities along the way.

The pelicans come to the lake area from Canada and they stay here all winter. They return at the beginning of April. They go back to British Columbia, Alberta, Ontario and Manitoba for breeding. Approximately 260,000 pelicans leave Canada each winter and most of them come here. It is a long flight back, 3,876 Kilometers.

Petatan was once an island. It is a very small town and the center of the fishing industry for the lakeside area.  When we drove into town, there were people sitting outside their houses and they waved and smiled at us. They must be used to seeing tourists coming to see the pelicans.

Petatan is not a wealthy community. It has not been developed as a tourist spot, it is a typical fishing village.

The photos above was taken from the shore. There are several places to walk out on the shore and see the pelicans. Unfortunately, we were there a little late in the season. Instead of seeing thousands of them, we only saw a few hundred. But it was still worth the trip for us.

The area where we chose to view the pelicans had an otherworldly quality. The water was out. The shore was white and barren. It was very peaceful although stinky from the birds and receding water. We had to watch where we stepped to avoid the mud.

Besides pelicans, there were other birds in the area. There is a small lagoon where they also hang out.

Everyday except Sunday, the fishermen dump several tons of fish parts into the lake. They fillet the fish there for commercial enterprises.

The photo below shows what happens when fish parts are dumped into the lake. There is a mad rush for the food. It must be crazy when there are thousands of pelicans going after the same food. I will have to return next season to see that.

These are American White Pelicans, Pelecanus Erythrorhynchos.  They also come to the north shore. I have seen almost as many in Chapala as I saw on this trip to the Petatan area. They used to hang out near the statue in the water in Chapala but recently I haven’t seen them there. Maybe they all decided to go to where more food was being dumped into the lake. A couple of years ago, I took many of photos of them near my house in Ajijic. Now I rarely see them there.

If you walk slowly, you can get fairly close to the pelicans before they take off. They, like the local people, must be used to the tourists.

We had read in the Guadalajara Reporter that there were several restaurants along the water front. We decided on the one they recommended, Restaurant El Pescador. We weren’t disappointed. The food was reasonably priced. The food was excellent and the service was also good.  We thought it would be crowded on a Saturday but no. We were the only patrons. Fishing boats were on the shore near the restaurant and once while we were eating our lunch, a fisherman came out and fed the pelicans. What a treat for us to see.

After we had our relaxing and delicious meal, we drove out of town. On our way, we saw their small malecon. It was clean and looked like a nice place to sit and watch the lake for a few hours but we needed to get back to Ajijic.

The drive back to Ajijic was also interesting. I took many photos from the car. Maybe one out of twenty comes out okay. I always enjoy riding along by the lake. I feel so lucky to be able to live in this beautiful area. Below is a photo that I took from the car window.

Driving instructions: Take the road south along the lake, passing Tuxcueca, Mismaloya and Tizapan. Twenty kilometers past Tizapan, turn left and drive into Petatan. In the town, keep left at every opportunity. It is just under a kilometer from the highway. There will be a string of feeding spots, unmarked but you will see the pelicans. It is easy to find. El Pescador is in the center of this small town by the water. Big sign, you can’t miss it.

Monday Market at the Hole in One Restaurant