Mornings In Mexico, Ajijic and Chapala in the 1920s 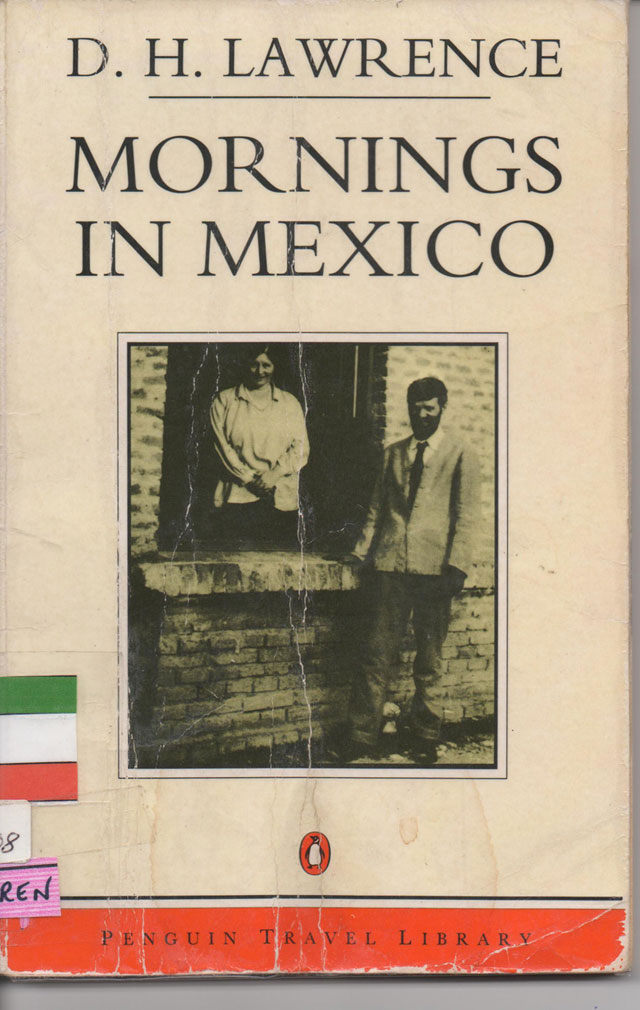 David Herbert Richards Lawrence. Born Sept 11, 1885. Died March 2, 1930. He lived in Australia, Italy, Ceylon, U.S.A., Mexico and the South of France. In the mid 1920s he lived in the Lake Chapala area. The home he lived in is now a Bed and Breakfast. The Quinta Quetzalcoatl Inn is located just two blocks from the Chapala Plaza. Lawrence wrote The Plumed Serpent while he lived there and Mornings in Mexico and several other things.

I haven’t been able to find the Plumed Serpent here but I was lucky enough to find Mornings in Mexico at the Lake Chapala Library. The first half of the book is about living in this area and the second half is about other places. I was charmed by what his life was like here. It was so different from what this area has become, yet in many ways it is still the same. I went through his book and picked out some of the most interesting parts to share with you. I hope you will enjoy them as much as I enjoyed reading his book. The photos didn’t come from his book. We just thought they too would be of interest to you.

Mornings in Mexico begins like this: “One says Mexico: one means, after all, one little town away South in the Republic: and in this little town, one rather crumbly adobe house built round two sides of a garden patio: and of this house, one spot on the deep, shady veranda facing inwards to the trees, where there are an onyx table and three rocking-chairs and one little wooden chair, a pot with carnations and a person with a pen. ………….it is Mexico. The sun shines. But then, during he winter, it always shines. It is pleasant to sit out of doors and write, just fresh enough and just warm enough. But then it is Christmas next week, so it ought to be just right.”

On page 28, paragraph 2, Lawrence describes a time of rest on his walk.

“And one drinks the soft, rather lifeless, warmish Mexican water. But it is pure.

Over the brink of the water-channel is the gully, and a noise—chock, chock! I go to look. It is a woman, naked to the hips, standing washing her other garments upon a stone. She has a beautiful full back, of a deep orange color, and her wet hair is divided and piled. In the water a few yards, up-stream two men are sitting naked, their brown-orange giving off a glow in the shadow, also washing their clothes. Their wet hair seems to steam blue-blackness. Just above them is a sort of bridge, where the water divides, the channel-water taken from the little river, and led along the top of the bank.

We sit under the wild guava tree in silence and eat. The old woman of the fruit, with naked breast and coffee-brown naked arms, her under-garment fastened on one shoulder, round her waist an old striped sarape for a skirt, and on her head a  blue rebozo piled against the sun, comes marching down the aqueduct with black bare feet, holding three or four chirimoyas to her bosom. Chiriomoyas are green custard-apples. “

Things have changed quite a bit since he wrote that part. You no longer see people half naked bathing in the streams. Maybe that still happens up in on the mountain but I have never been there. It is a beautiful scene though.

On page 35, Lawrence wrote about his servant: “He works for four pesos a month, and his food: a few tortillas. Four pesos are two American dollars: about nine shillings. He owns two cotton shirts, two pairs of calico pantaloons, two blouses, one of pink cotton, one of darkish flannelette, and a pair of sandals. Also, his straw hat that he has curled up to look very jaunty, and a rather old, factory-made, rather cheap shawl, or plaid rug with fringe. Et praeterea nihil.“

You can read the whole book online here

Times have changed. Now the Mexicans work in the home for around three dollars an hour. This man in Lawrence’s home slept on a bench by Lawrence’s door so he would be there in case someone wanted to come inside. So, he was available 24 hours a day.

I love his description of market day. This is just a small section of it from page 44, paragraph 4: “ From the valley villages and from the mountains the peasants and the Indians are coming in with supplies, the road is like a pilgrimage, with the dust in greatest haste, dashing for town. Dark-eared asses and running men, running women, running girls, running lads, twinkling donkeys ambling on fine little feet, under twin baskets with tomatoes and gourds, twin great nets of bubble-shaped jars, twin bundles of neat-cut faggots of wood, neat as bunches of cigarettes, and twin net-sacks of charcoal. Donkeys, mules, on they come, great pannier baskets making a rhythm under the perched woman, great bundles bouncing against the sides of the slim-footed animals. A baby donkey trotting naked after its piled-up dam, a white, sandal-footed man following with the silent Indian haste, and a girl running again on light feet.”

What a scene. Now they come in on market days in trucks filled with their products. But there is still the feeling of great activity when they arrive and set up their stalls. Lawrence wrote about how they bargained for everything. You can still do that in the markets.

Lawrence goes into great detail about the Indian dances. In parades here there are still similar dances. One big difference is that now they will dance for several hours. Then, they danced for several days.

Here is a small section of his description of the dance. It is from page 63, paragraph 7: “ You realize the long line of dancers, and the solid cluster of men singing near the drum. You realize the intermittent black-and-white fantasy of the hopping Koshare, the jesters, the Delight-Makers. You become aware of he ripple of bells on the knee-garters of the dancers, a continual pulsing ripple of little bells; and of the sudden wild, whooping yells from near the drum. Then you become aware of the seed-like shudder of the gourd-rattles, as the dance changes, and the swaying of the dancing men, in the broad green arm-bands.”

I am only going to give you two more exerts from Lawrence’s book. They are about time.  From the second paragraph on page 32: “ The white monkey has curious tricks. He knows, for example, the time. Now to a Mexican, and an Indian, time is a vague, foggy reality. There are only three times: en la manana, en la tarde, en la noche. In the morning, in the afternoon, in the night. There is no midday and no evening.

Then further on the page he writes about Manana. In paragraph 5: “But the white man has a horrible, truly horrible, monkey-like passion for invisible exactitudes. Manana, to the native, may mean tomorrow, three days hence, six months hence, and never. There are no fixed points in life, save birth, and death, and the fiestas. The fixed points of birth and death evaporate spontaneously into vagueness. And the priests fix the fiestas. From time immemorial priests have fixed the fiestas, the festivals of the gods, and men have had no more to do with time. What should men have to do with time?”

Things have changed today. Mexicans know about time. They have clocks and watches. But to the frustration of the expats, they also sometimes have this same Manana attitude.

I enjoyed reading Mornings In Mexico. I hope if you see it around, you too will pick it up and take a little trip into the past. It was great fun.

We are here to help, you can contact me in the comments below and either I or one of the Access team members will be glad to help you and answer questions.

Yet another year has past since this well known popular tradition has been officially canceled due...
Continue reading
by admin