My Observations On Mexican Families 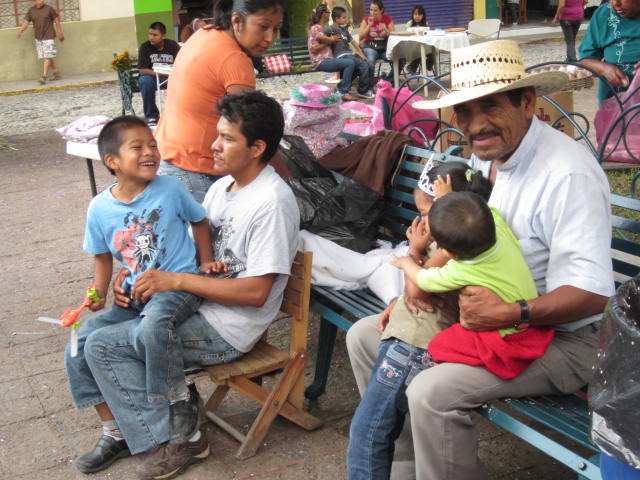 My favorite photos are of people. I have seen many travel videos that showed beautiful scenery but no people. I remember a few years ago seeing one like that of San Blas. I was sitting in a rickety seat in a small movie theater watching a video of a place where I was living, and I didn’t recognize any of it.  They must have taken those shots so early in the morning that no one was up yet. Many of them were taken at an angle showing just the tops of the buildings. But what is a place without the people?

For me, the people far outweigh the buildings and the scenery. So, I am doing two posts, just about people. This one is of the Mexicans. The next one is of the Expats. Some of the Expats live here full time and some are here just for the winter season.

I hate to admit this but I do not speak much Spanish. I am getting so I can understand some conversations but as I age my memory gets worse. That is my major problem. I forget things. I only know the Mexicans as an outsider. I see them going about their daily chores and during their relaxation times with their families.  I will try not to draw conclusions about their culture from what little I know. I can just make guesses from what I see and photograph. All I can do is show you through my words and photos brief glimpses into their lives. But I hope they will portray some of the qualities I have seen here in their families.

One quality I see is the strong family tie. I have also talked with many Mexicans about this subject. Families here take care of each other. They can’t rely on the government for help. They must rely on each other. At a young age, children start learning to help out with whatever business the parents run. Older children take on the care of younger brothers and sisters. Sometimes children have to go around from place to place selling their wares, such as berries or green beans.

The older family members are cared for in the home. I know there are nursing homes here but until an elderly person becomes impossible to care for, he or she stays in the family and all the members help with the care.

When I was in the IMSS hospital in Guadalajara, I witnessed a very old man being cared for by what I would guess to have been his great grandson. The man couldn’t sit up. His face was almost black and he obviously was in a great deal of pain.  This young boy, I am sure he was not over nine years old, was standing on a stool beside the bed. He was wiping the old man’s brow and softly talking to him, comforting him. He looked exhausted but he didn’t leave his post. Love was pouring out of him towards the old man. That scene touched me deeply.

I am often amazed at the poise and confidence young children have when they are helping their parents in their businesses.  Many times the children speak better English than their parents. They end up doing most of the transaction including making change while their parents look on in obvious pride.

I have an American friend here who lives alone. She likes to live alone. She is a writer and needs time by herself. She used to complain to me about her Mexican woman friend. This friend came to her house every evening and sat with her, talking– for hours. My friend couldn’t get her work done.

She didn’t want to hurt her friend’s feelings but she didn’t know how to tell her friend that she needed to be alone in the evenings. The problem was a cultural difference. Most Mexicans can’t understand why anyone would want to live alone, especially a woman.  The Mexican felt she was doing her friend a favor by keeping her company every night. She felt sorry for her American friend who had to live alone. They finally worked out this problem but it took several months. So even if you do speak Spanish, there are still cultural differences and problems that come up because of those differences. My friend speaks excellent Spanish but she still could not explain to her Mexican friend about her need to be alone. She loved her Mexican friend and didn’t want to risk insulting her.

On weekends here by the lake, many Mexican families arrive with everything but the kitchen sink for picnics. Actually I have even seen sinks with them too. They are mostly composed of large family groups, from babies to the old people. There seems to be much interaction between them all. During the week many of the mothers are able to take their babies to work with them. All this time together helps to create strong family ties.

Everyone has a place within the group and everyone participates with the responsibilities. The older children take care of the younger ones.  Everyone is needed in one capacity or another.

When my daughter-in-law first visited Mexico, all the babies here impressed her.  She had recently been to Europe. She said she didn’t see many babies there. In Mexico, babies are everywhere. Many young girls here have babies.

I enjoy watching the fathers taking care of their children. I see a great deal of love expressed between the men and their children. Maybe it is because they spend so much time together, both at work and at play. They know each other well.

If a business is family run, then the family spends much of the day together. After work, they play together.  The children help cook the meals and take care of the older people. I believe that kind of responsibility taught at a young age helps give people higher self-esteem. They get to know themselves better. They learn how cooperate in a group. They learn how to love each other.

I have great respect for the Mexican families. I wish one of them would adopt me. Sometimes it is lonely to live alone. That is one big reason I like to go out on weekends and soak in the love I see expressed in their family groups.

The Expat Community In The Lake Chapala Area